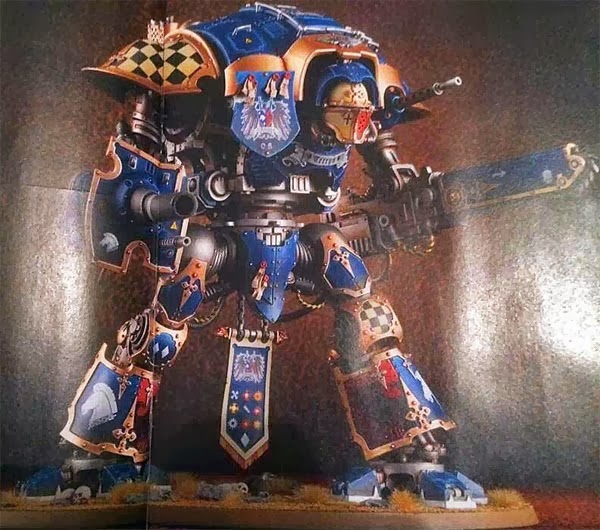 The hammer has dropped and this is what we have.  Not taking into account any of the rules or rumors, that is hands down an awesome and beautiful model.  There is no way to really to put it otherwise.  I know I always tell myself that I will only buy stuff that I like the rules for and GW is out of touch when they think that people will buy based off the models look and not the rules.  And I look at this and I really don't care what the rules are, I want one.  But there are rules and it does affect what and how I buy.  I was wrong, 4chan was right, this baby is a superheavy and it has the D.  Now how is this going to affect 40k and what is it going to look like going forward?


The answer is not an easy one.  If you are not aware, this is supposed to be a codex  similar to inquisition (called it), not a formation.  So do we ban whole codex's now?  Parts of them?  Do we change whole rules?  I don't think that is the answer.  At the beginning of this I was not happy with superheavies being part of standard 40K, had it been an expansion like planet strike sure no problem.  But its now a part of the game, and here we are with a superheavy codex about to hit us in the face.

I read an interesting argument between two of the more involved local tournament gamers here and one was for and the other against (stronghold/escalation).  The one for it made a great point that there are already plenty of unbalanced and unfun things in "normal" 40k, just take a look at O'vesa star, screamer star, seer council, serpent spam, riptide spam.  These are all perfectly legal and you can tell some one to shove it if they want you to change your list.  Granted thats a dick way to approach it, but you can.  Why is anything in my codex not takable in any combo I want that the rules allow?  Oh you don't like it.  Well tough shit, there are things I don't like either.  How is a super heavy or D weapons so much more over the top then the unfun things that we are told to just suck it up and deal with at tournaments or even casual play.  Yes casual play is different generally because your not looking to be a dick and just get a fun game in.  But this is a competitive game, one person wins, one loses, you can't change that dynamic and hand out the blue participation medals because it feels good.

So should knights or superheavies in general be allowed?  I think the answer should be yes, including tournaments.  Now that doesn't mean that all tournaments should have all the rules unchanged from the BRB.  A TO by its very nature of the even will modify the base rules, even if it is something small like ignoring the random terrain or changing the missions.  If that is ok why is other changes so hard to swallow.  Why not just change the weird way fortifications are placed?  I mean placing them before terrain makes no sense, as any defense is going to have to be placed in accordance with the preexisting terrain.  Does the Mechanicus come and scoop up all the land, place forts and then drop the land back down again?

While we are talking about change, why not go full retard?  If we are going that route then F it, lets redo the whole game while we are at.  This is the logical conclusion if you follow the arguments of comp and modifying the rules.  Where does it stop?  Who decides where it stops?  We all have biases.  I love the IG and I will admit that if I changed the game, try as I might to not do it, it will end up slanted in my favorite armies favor.  And just having a council of represented armies is not the answer either, what I think is good for IG is not the same as you.

At this point, I think we just need to ride along the wave.  Its a big one and it has been the biggest changes to 40k in a long time.  Perhaps we just need to play it as the rules allow with as minimal changes as possible.  If D weapons need to be nerfed I'm ok with that, but then why not rerollable 2+ saves, or limits on certain units.  This is the issue.  Its all personal and opinion.  I don't like lots of wave serpents.  But how is that fair to the eldar player where that is his only dedicated transport.  Its not his fault they are good, why should he be punished for playing a style of eldar that is legit and fluffy, he may not be playing them because its fluffy but it still is.  The wind rider host would beg to hear your arguments otherwise.

For me, I agree that there are some things are powerful and suck to play against, but you know what most of those AREN'T in escalation.  So why is that the tipping point.  So yes the Revenant and Warhound are prob the most potentially destructive and powerful units, well we can either deal with it and just see what happens or bring out the ban hammer and see how far it goes.  I don't think I like it that way, punishing certain armies or units, but then again maybe it is needed or maybe modifying D weapons will help.  But then what should they be?  That is whole question entirely and can the community even agree on that.

If I was to change it D weapons would be S10 AP1  instant death, ignores cover, armor bane, re-roll successful invuls(similar to the old swarmlord rule).  I think that gives the weapon the appropriate status as the most deadly in 40K but not something that is going to be just killing everything, you still have to roll to wound and everything like normal.  Maybe this is too strong for some, I don't think so but I know many will disagree and there is the crux of it.  Why should you accept my ruling? Why should you?  Why the hell should I accept yours?  Or Reece Robbins for that matter?  We are just people with our own biased opinions on what the game should be with no credentials.  Sure some have played more tournaments, or ran them, but how is that a credential, how does that make that person an authority to dramatically change the game we play? To make a decision for everyone.

What I have to ask myself is what do I want to do and the answer is I want to play with knights.  And why shouldn't I?  Or you?  Why should you have to convene a UN council every weekend to play 40k.  Oh everyone agrees except for Russia so guess we have to do something different.  No.

There is too much arguing and too little discussion going on right now.  This has been a tumultuous year and is set to be another one in the coming months.  Perhaps we just need to hold our heads down, play the game and wait and see what comes out of this.  We may be surprised.  Or it may need changing, but it is too early to truly say if things need to go.

There are far to many abusive units in normal, totally tournament legal 40k that we are told to suck it and deal with for any to truly and fairly argue that these additions break the game or make it unfun.  So lets just play the game and see where we end up.

Please share your thoughts, keep this one civil and a discussion, not an argument.

GG
Posted by Grumpy Guardsman at 11:37 AM