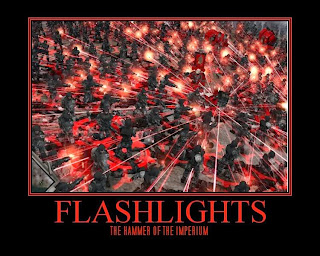 Ah the humble angry flashlight.  Time to go back and look at how lasgun tactics have changed and new ways you can use them, as there are a lot.  It is still one of the weakest standard weapons in the game, but it is the core of the IG and will bring you to victory if used astutely.  Never underestimate how useful the lasgun can be and the ways you can use it to end your foes. Now obviously orders bring it to a whole new level and I will talk about that, but there is more to this simple laser pointer than just shooting infantry.

The Basics
First off, this whole article is based off the fact that your IG army has a good amount of infantry, and if you are a guard player there are many other options to play with, but most will have a sizable portion of infantry. My armies vary as I like to tinker with things, but at its core is always the infantry. When using them remember that they are only a part of the whole, you anti-tank and powerful anti-infantry weapons are there to hit at key points, but you are going to be relying on the massed fire to put wounds on most squads. What is critical is to use them to support your overall goals and tactics. This ties into use of orders and doing them in the right order to get the result you desire. So for example a mob of 30 ork boys is in front of your line and for sake of argument is in rapid fire range, use first rank etc to maximize your shots, this is very effective if you are using veterans especially. You have only one special weapon and no heavy, so that's 24 shots, hit with 12 and wound with 8ish 4ish (Brain math hurt), so you bring the squad down to 26ish depending on rolls. This goes up significantly with veterans btw. Do the same with another squad, to get them into the 15 man range. Then you use mortars/wyverns, and as long as your scatter isn't crazy, you will score enough wounds to bring them below 10 and hopefully they roll high on the mob rule chart and run away. With 2 squads and a mortar squad, you a have neutralized a large and dangerous squad, and this is not taking into account heavy or special weapons in the squads. Use your lasgun fire to support heavy weapons that can bring the damage to a critical point. Note that against tougher targets such as space marines, you won't kill as many, but the three marines you do kill will be far bigger difference to that squad.

Also remember to concentrate your fire, don't spread lasgun fire across the board, you have 5+ turns to play, focus on a few squads and maximize your damage on them a turn and then move on once they have been neutralized. This doesn't mean that the unit is dead, but that its threat is now minimal compared to the others around it. Two marines can still be deadly, but focus on the ten man squad instead and save the two guys for later, if you kill them outright good, but don't get tunnel vision on a unit and forget what is left in the army to fight. It helps to assign squads areas and units to focus on as well, and if using regular squads, Combining them is recommended, to maximize damage and survivability. 20 guardsmen can make a huge dent in most squads even with lasguns, 50+ shots is hard to argue with. This also maximizes orders as you can spend one instead of two to get the same result. With veterans, their higher ballistic skill makes up for their lack of numbers.

Now another important thing to take into account when using lasguns with heavy and special weapons, is to fire at targets that they can all wound (ideally). Now if you have a lascannon, well your going to fire at a tank but if one is far away and not as much of a threat as the space marine squad thats going to be in charge range next turn, focus on that squad, the lascannon is not wasted as that is a near guaranteed kill. Having a whole squad sit useless when they could be effective is a great way to lose. Remember the heavy and special weapons are there to support the squad, not the other way around. I will talk about MCs later but the basics is to target T6 MCs and lower to at least have a chance of the lasguns wounding. I'm sure I'm not the only one who has had a lone guardsmen take the final wound of a carnifex or other MC and kill the monster. While those are certainly rare, 20+ lasgun shots with a plasma and lascannon can cause a significant number of wounds.  With new orders now you can split fire and this is an ideal order for a squad with an anti tank weapon in it.  However you may want to use tank hunters to maximize chances of damaging the target, so consider this an weigh your options, many times split fire will be the one you want to go with.

Advanced
Sadly I must bring up that a favored old tactic of mine is no longer usable with the changes to grounding.  You used to be able to shoot and hit a FMC and cause a grounding check, now it is only one at the end of the shooting phase, and you must wound it.  So while you can still shoot lasguns at T6 FMCs and lower, you will not be able to bring it down with flashlights and then hit it with heavier fire.  Your best bet is to use dedicated AA and lasguns only as a last resort now.

That being said, there are definite things you can do against normal MCs.  Take into consideration this only works with MCs with T6 and below, so don't bother firing at T7 and higher MCs.  While alone a lasgun won't do much, I'm sure I'm not the only one with a story of a lone guardsman taking the last wound off of a carnifex or other MC.  With orders you have a much better chance of bringing these monsters down.  The best way to use this order is with a large combined squad, hopefully with a few anti MC weapons already in it like plasma guns.  Use the bring it down order to get rerolls to wound, and if you have prescience, go for it.  The weight of lasgun fire will cause enough wounds to finish it off.  The goal is to knock as many wounds off with the better guns, like plasma, and use the weight of lasgun fire to finish it off.  I have had a vet squad with a few plasma guns kill a riptide in one round of shooting.  If you have a large squad as well, you can use first rank fire to increase your shots, but its better to have rerolls to wound in my opinion.

Now lets talk about enemies in cover. First off you have a great order called fire on my target, which gives the ordered unit ignores cover. This may not seem like a lot, but that may be the difference between one enemy dying and three(or more).  This works best against units that rely on cover and not armor, like orks, nids etc.  Pathfinders also find this to hurt them a lot. Against these small squads you can maximize your wounds and can negate that cover the enemy thought he was safe in.  Orks, Tyranids, Tau, Eldar, other Guard, this makes your little flashlight useful against those dug in squads. Use this with wyverns and you have a deadly combination, the lasguns whittle them down for the mortars killing blow, and if they survive, they will still have to face a morale check.

While focus fire is no longer a thing, you can use an order to almost get that back.  Take aim gives the ordered unit the precision shot special rule.  Note that since it specifies the rule, you do need 6s to hit in order for the shot to be a precision shot.  This works best on a unit that is relying on tank to take the wounds.  You should be using this in rapid fire range, and ideally with prescience to give you as many 6s and hits as possible.  This allows you to hit targets behind the tank up front, and if you are really lucky you can possibly break coherency if he is an IC, allowing you to shoot at each independently.

With the loss of pinning on barrage weapons, the IG have taken a big hit in their tool belt.  Using pinning weapons effectively wins you games, and there are less and less that ignore it (orks no longer do).  And speaking of orks this tactic is great against them for multiple reasons.  Use the pinning order on a large squad and have them target a large unit (or small) and force them to take pinning checks.  Worst case is you kill some of them and they pass both their checks.  Best case you kill orks and they are stuck in the open unable to come at you.  This tactic is best used against middle to low Ld targets, that obviously do not have fearless or ignore pinning.  This is great against units like pathfinders and other support units, forcing them to make snap shots and reducing their effectiveness.  Pinning is a great way to neutralize units, it takes them out of the fight for a turn and allows you to focus on critical targets that need to be dealt with, but others can't be ignored either.

Always remember to use your lasguns in a way that supports the overall shooting and tactics of your army.  The orders that the IG have make lasguns extremely useful and can deal with many threats.  When used right lasguns can win you the day.  There are other tactics that work well as well, using psychic powers like enfeeble is a great way to improve the effectiveness of your shots, against marines this makes lasguns far deadlier.  There are other weapons like rad grenades that also do this and are great to take advantage of if you have them.

The lasgun is a great weapon when used properly. Though it may be weak, you will have a lot to use. Use them to support the army and give your heavy hitters the chance they need to win. A charging squad supported by lasgun fire can tip the balance of a game to victory.  Let the flashlight party begin!


Posted by Grumpy Guardsman at 2:22 PM