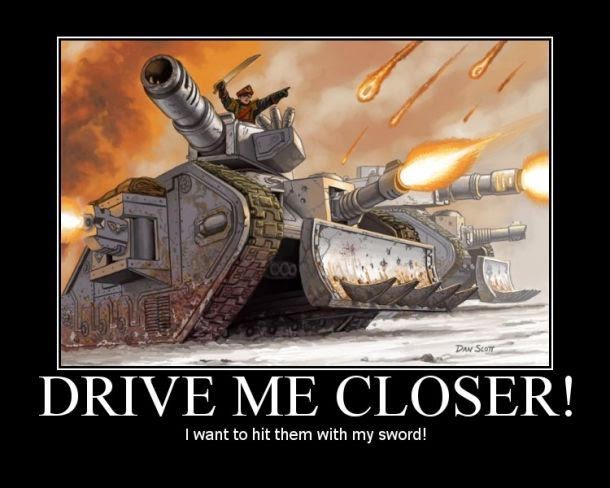 Ok I talked about building a general core for your imperial guard army, but as I mentioned this really didn't apply to an armored one. The tank based army is significantly different so its core is much different and how you should start building. Your end state is to have a lot of tanks that can function as a nearly whole army and fight effectively. To do so your going to have to start somewhere.

Your basic core is again going to revolve around your HQ and minimum troop choices. Here though it varries from other IG armies. Obviously your HQ choice is going to be a Tank commander. When it comes to choosing which russ to take, it comes down to user preference. I am fan of vanquishers, some are punisher fans. Just keep in mind that you want to take advantage of BS4 and the orders, notably split fire being the most used. A vanquisher command squadron is good as you can have the commander shoot at one tank, and the other two target another. To start off with though you can get away with only two tanks in the command squadron.

Weapon wise you want the two tanks to be similar or the same. The point is to be still able to threaten the same targets and at the same time take advantage of being able to split your fire. Punishers and exterminators and executioners work well here. Being able to hit similar targets without losing effectiveness and still being able to split their fire effectively as well. The goal is to have a unit that is not too specialized, with only a few exceptions. The main one is with vanquishers. If you are going to have a tank hunting unit, then you are taking three and they are very good at it and can still pop armor with AP2.

The next part is going to be your troops base, some may call it a tax. I would encourage you to not look at it that way as they are very useful and best to not simply be ignored before moving to more tanks. Here you really do not want to take platoons. Simply because they will take up too much models and points once things start adding up. What you want is 2-3 veteran squads in chimeras or tauroxes. The choice between the two is minimal and really up to what you like. Tauroxes are a little cheaper so have that slight advantage if you are looking at keeping points lower. Chimeras are slightly more durable and have more firepower. Most time tauroxes will do fine, but I would lean towards chimeras.

The vet squads are your clean up crew and close protection. They are good so don't feel like you have to purchase the base unit and pass on. They are prefect for protecting your tanks from dangerous units. Since they are going to be mounted, you don't need three special weapons. My advice is to purchase two and then move on to the rest of your army and then come back and take the third if you still have points. A plasma squad is very good here for dealing with tough targets that are moving on your tank line. A heavy flamer is good, as well as melta guns, though not as much as this army will generally be fine dealing with tanks. The vet squads need to be mobile and capable of dealing with priority threats. Most times I would recommend plasma guns on them as they are very useful. When it comes to doctrines, they can be very good, but make sure they fit into your army and you aren't sacrificing points on a leman russ.

The last part of your core is a normal leman russ squadron. To start with two tanks is what you are looking for. Here you want a solid all rounder and the LR MBT is not a bad choice, yeah ordnance hurts them but your still are thowing S8 AP3 large blasts around and there are few things they won't hurt. Vanquishers are great as well if you didn't take any in your command squadron. What you want is to fill a role that your army is missing. Generally go with anti tank or infantry. Based off what you chose to go with for your command squadron, the standard russ squadron should supplement them by being able to perform in a different role. So if your command squadron is anti infantry focused, your standard one should be anti tank focused or vice versa.

What your core should look like is 4 leman russes and two vet squads in chimeras/tauroxes. This gives you a solid base to add more tanks to, as well as supporting units to fill in the gaps in your armored force. Hope this helps and gives you a good start.
Posted by Grumpy Guardsman at 12:35 PM