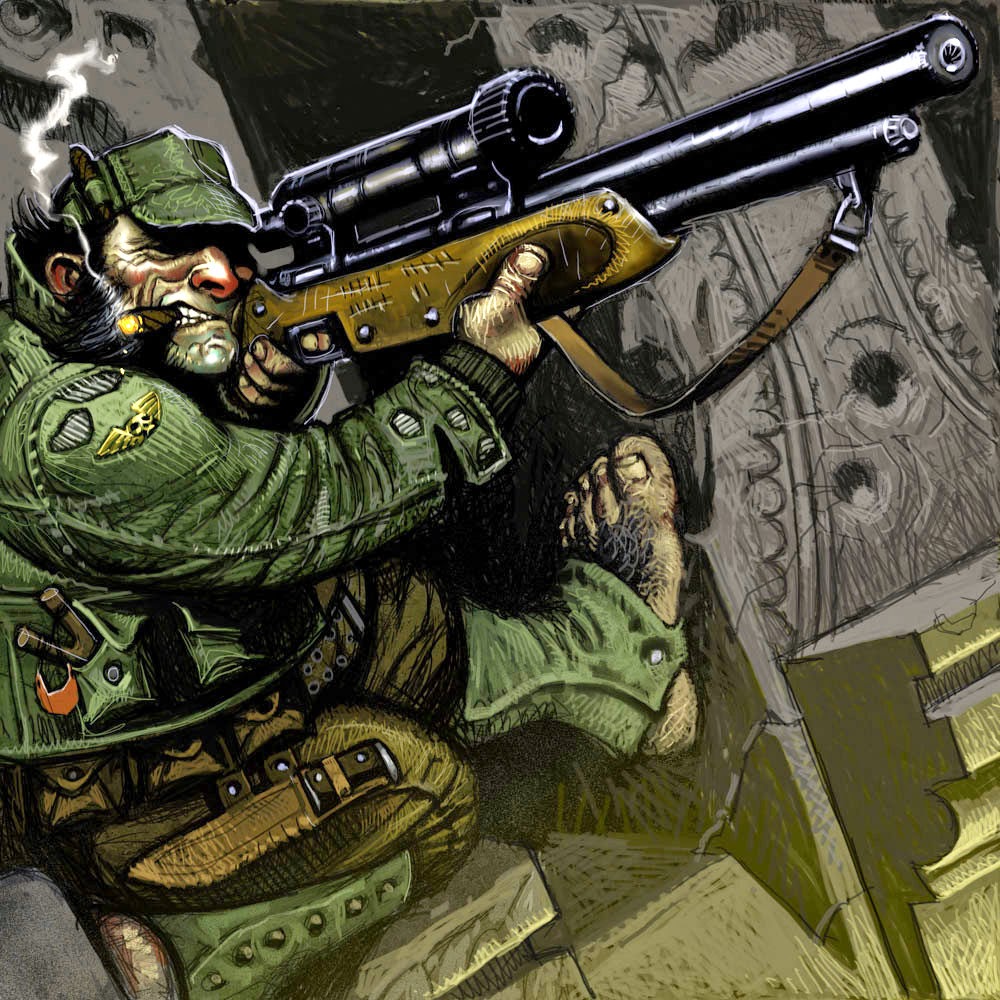 On to ratlings.  The next in the elites, these guys changed very little on their own, gaining a new special rule but otherwise staying the same.  The problem these guys have is not really themselves, its the dump 7th decided to take on sniper weapons in general.  They can however be a cheap unit and useful, though are certainly not an auto take in any army.

The base squad starts at 3 guys, 10 pts each, and you can have up to 10 at 10 ppm.  They are WS2 BS 4, S & T 2, I 4, and Ld 6.  They are good shots, but cannot take hits.  They have flak armor, a pistol, and sniper rifle.  They have infiltrate, stealth, and lastly, shoot and scarper, which allows them to run after making a shooting attack.  Taking the minimum, you have an infiltrating unit with stealth and a few sniper rifles.

The new shoot and run rule is ok, its free as they stayed the same in price, so there's that.  But I have yet to find regular use of this ability.  The problem is that they have heavy weapons and sure they can run after shooting, but what about the next turn.  Very rarely is a run move going to get them out of trouble if they are being pressed.  Getting them out of LoS is great, but then you have just neutralized the unit for your opponent as they are now unable to shoot at anything.  Best use of this rule is to slowly reposition each shooting phase, creeping them up a building or other terrain for better shots, or closer to an objective.

The big problem really is that sniper rifles kind of suck more now.  They lost pinning and rending.  In return they are still AP 2 on a 6 to wound, and count as S4 against vehicles, which is categorically worse than rending.  In large numbers, you can hurt MCs or other high T models.  But even in the best shooting rolls for a full squad, the best you can hope for is 5 wounds, and thats with no misses.  On a wraithknight that really is not a lot of wounds, and even less so on a riptide.  You'll get an AP2 in there, but even then that really is not enough.

However there are uses for them.  I like the small squads, 5 or less, and using them as a scout bubble defense.  Moving them into a position to push back scout moves and hopefully other infiltrators.  At 30-50pts, this is not bad.  Plus they can camp an objective and be annoying.  You can order pinning onto them, but most times other units will make better use.  They have a very low leadership so chances are they will not be passing many orders.  This is another reason to keep them small, you don't really want to be baby sitting them, so keeping them small means that most likely when they are targeted they will simply be wiped.

You can use leadership boosting units to help them, but really this is not a unit that should or wants to be babysat.  They are cheap and can infiltrate.  The best way is to put them in a good ruin and let them plink away till dead.  They are a small investment for a good distraction and simply for pushing scout moves back.  I would prob never take more than two small squads of them.

There are just a lot a problems with the effectiveness of sniper weapons in 7th edition which hurt ratlings.  Their only boon is being one of the only infiltrators in the codex as well as having stealth.  Its not a lot but when taken as a distraction throwaway unit that might kill a few things, they are not bad.  As an elites choice they are ok and probably not the worst.  But they are one that is going to struggle to excel and do any significant damage.  A large unit could potentially do enough damage over a game, but really their best use before was to pin units in place for your better weapons to finish them, now that really is a near impossibility.