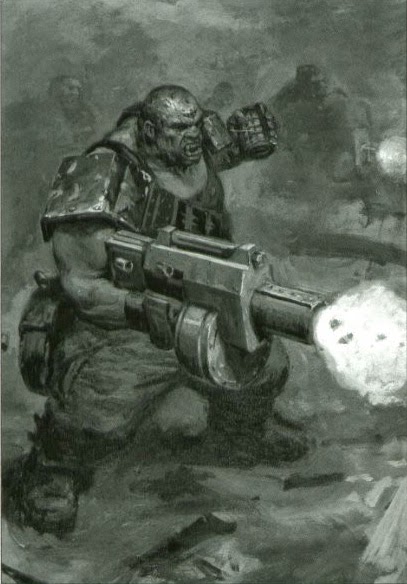 Alright, finally back.  It has been busy lately and I have had a lot of distractions.  The wife and I are buying a house, so a lot of time has gone into that, and I have become obsessed with world of tanks and other games now that I can play them again.  With all of this, I really haven't been playing a lot of 40k lately.   But I am back and ready to go now!  Today lets talk about gryns.

In the new codex we have two versions of the gryns, the old Ogryns and the new Bullgryns, and both are the same stat wise.  S & T 5, 3 A, WS 4, BS 3, I2, LD 6.  Bone heads have an additional attack and leadership.  In special rules they have changed though, they retained stubborn, but lost furious charge and gained hammer of wrath.  Its kind of a toss up, as both only come into play when you charge, and with the low I, its nice getting an extra round of attacks in before your opponent can strike.  And with S5, in most cases the hammer of wrath will be more useful and furious charge.  Against a few things like MCs and T5, T6 models, furious charge is better, but most time hammer of wrath will do you well.  They went up to very bulky with hurts them a lot, as they now count as three models for transporting, meaning the max you can fit into a chimera is 4.  You can put them in valkyries now as the previous restriction is gone, though if you really are looking for transport options, something with assault vehicle status is what you really should be shelling out for.

Ogryns are otherwise exactly the same as before, they are the same pts cost, which hurts in my opinion as they are in termie price range.  At 40pts a model, they are tough but not the same.  They only have a 5+ save, which means being in the open is a death sentence, with tons of S6 weapons out there, ogryns can be gunned down even with 3 wounds.  They will do will if they are only facing small arms fire, but when scatter lasers and missile pods take aim at them, they won't last too long.  This is why very bulky really hurts them, as they can only fit into chimeras in small squads.  This does not make them useless though as they can still be used effectively.  Ripper guns are good with 3 shots and S5, allowing them to hurt a lot of targets including light vehicles, with the downside of needing to be within 12" to have range.

Taking all this in, Ogryns work well as a mobile unit, that can move to counter attack and plug holes in your line.  Even though they can only fit as small squads, this is fine as you don't want them to become a point sink and a small squad can get the job done still.  3-4 is what you want.  Anything more and you can't fit them into a transport (i'll discuss allied transports later).  4 gives you an extra ogryn, but means you won't be having someone joining the squad in the transport.  If you have commissar yarrick, or even a plain lord commissar nearby, this will work fine as they will benefit from his leadership boost and warlord trait without needing to be joined to the squad.  If you take 3 though then you can add characters to help their low leadership as well.  A priest is great to make them fearless and boost their CC capabilities, which they are quite good at.  Yarrick can be good with them as well, standard commissars with power weapons are good as well, as you don't have to execute anymore if you don't want too, and if a priest is in there then its already taken care of.  You want to choose characters that will boost their low ld and their cc capabilities.

Ogryns work well when you use them to pick on weaker units, especially those that lack power weapons or high S.  Still beware of mass attacks, so avoid large ork mobs till you can whittle them down, as they can still put a lot of wounds on with the mass of attacks.  A space marine squad or bike squad does not like facing ogryns, they'll get tied up, especially if no hit and run, and will struggle to get through all their wounds and T5.  Small termie squads can be targeted but you should avoid lightining clawed ones, TH SS and standard termies are fine as you will get hammer of wrath and then your attacks before they can swing back and they are not strong enough to cause instant death.  They are great for tying up MCs that aren't cc focused like riptides.

You don't want to commit them too early, let them get into position and wait for your opponent to get too close and then go for the weaker units.  Ogryns are great for charging in a contesting a non OBJ SEC unit and keeping that objective from them.  Ogyrns other use is in punching vehicles.  At S5 they can hurt anything with rear armor 10/11 and with a large number of attacks they can do enough damage to bring a vehicle down.

If you really want to use ogryns, you should consider using an allied transport to give them a boost.  Land raiders are great as with a crusader you can bring a large squad of ogryns with characters to boost them.  Then you can drive straight to your target and unload them right into the fight without having to worry about waiting a turn to charge.  Storm ravens are another good choice here.  Its an investment, but one that will pay off.

Bullgryns are in my opinion a little more useful than ogryns.  Their slab shields are really nice and with them they can have a 3+ save and provide cover bonuses to your vehicles and infantry.  They are 5pts a model more than ogryns, but these guys don't need a transport to get the most out of them, so it ends up evening out as you aren't bringing a chimera along.  They have the grenadier gauntlet which is a S4 ap6 blast 18" weapon.  Nothing to really write home about, but is still a good weapon.  For 15 more pts you can drop the slab shield and gauntlet and take a power maul and brute shield, giving a 5++.  This is really not worth it in my opinion.  Now if they could take a power WEAPON, then it might be different as power swords would be great on them, or power axes.  Mauls don't help out as much as they already have a high S, so a bonus to that with no really good ap doesn't give enough of a boost plus losing the +1 to armor save and not providing bonuses to troops behind.  You just don't get enough to make it worth it, if they could choose their power weapon then it would be a different story.

What you want to do with bullgryns is to take advantage of their ability to increase their armor save and go into shield wall mode.  Have them all touching bases and form a forward line in front of your infantry and armor.  I have found a squad of 6 is more than enough to give a good coverage and be survivable.  With the 3+ save they can be very survivable and enough to stay on foot.  There are still plenty that can kill them, but with T5, even a helldrake can only cause one wound per guy at most.

You may be tempted to take a large squad, but its better to have multiple smaller squads here, as they are a good sized model and getting cover from them is not hard for units behind and they are tough enough with their armor and toughness to take a lot of wounds.

They work well in multiple roles.  One is the objective camper, they can move up to a near objecitive in the middle and then hold it.  Your infantry moves up behind them to take if needed, if an OBJ SEC unit comes their way.  The bullgryns can hold an objective for quite a while and can soak damage to keep your other units alive.  They are a great bubble wrap unit, as they are tough and provide cover bonuses and should be used with the idea of keeping the units behind them alive, not necessarily themselves.

They also work well as an advancing unit, with units behind them to support.  Walk them up and draw fire.  They really are great at taking hits and you want to get your opponent to shoot at them.  Use them early to draw fire and keep your infantry alive for later in the game.  To increase their survivability, use movement to keep fresh bullgryns up front.  These guys are also just as good in cc as ogryns, so when you get in range, charge and smash stuff.

The biggest thing that makes these guys useful is 7th allowing them to score.  Bullgryns are better at this as they can stand in the open and take hits better than ogryns, and you can afford larger squads with them.  All in all they are not a great unit, but good enough that they are something to consider and will do fine in smaller squads.  Taking large ones sounds nice, but they become too much of a points sink and getting those points back can be hard.