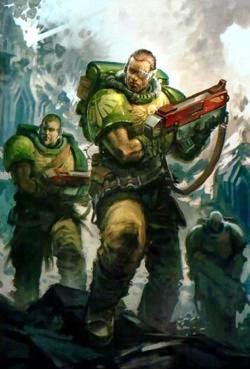 Have a random thought bouncing around my head.  It revolves around how Scouts, being initiates into the chapter and not quite yet a battle brother, run around all sneaky, infiltrating and scouting all over the place, then upon elevating to battle brother status forgets all that crap.  There can be reasons for this, but really it seems even in the fluff that battle brothers have almost forgotten how to do all that infiltrating.

And really, there is no reason tactical marines, or any other marines should not know how to infiltrate.  There is the practicality aspect, as terminator armor isn't very sneaky, so yeah I can see why they aren't popping up randomly without teleporters.  Assault marines have noisy jet packs, so again, I can see why they aren't infiltrating either. "hey whats that loud obnoxious whining coming from over there" "oh its nothing ignore it".

A few chapters that specialize in certain skills do have some ability to do this, like raven guard and white scars, but only to a certain degree.  So why don't the majority of chapters retain this skill?  Why is it lost when scouts become battle brothers?

It could boil down simply to: We are too manly and awesome to do that sneaky shit anymore.  Let the scouts do it.  Its a valid argument, but one thats not really supported too much in the fluff.   At the very least its not explicitly mentioned that's why they don't sneak around anymore stabbing people in the back of their faces.

It may seem silly to think about, but really there should be nothing stopping tac marines from sneaking around, especially the ones that are latest to be elevated to battle bro.  They should be all like "hey guys I know this cool trick where we sneak up on the enemy and face stab them."  Are the rest like "no fuck that, lets walk in the open and get shot in the face like a man!"

I'm not arguing that all tac marines should get infiltrate and scout in game, as that would be pretty brutal to have 60 tacs show up 18" away from your army and then go bolter death blossom on you.  As cool for marines that would be, thats not a great game mechanic for an army.

So I don't know why marines seem to forget the sneaky bits when they become battle bros, prob just as simple as, we are above that crap now, save it for the scouts.  But they should still KNOW how to do it, even if they don't want to anymore.

What are your thoughts on it?

GG
Posted by Grumpy Guardsman at 11:43 AM