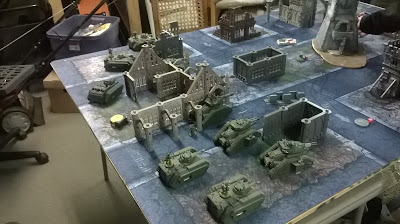 For today going to discuss an alternate counter deep strike tactic.  In principal it is similar to bubble wrapping, but works different enough to be its own thing.  This tactic is less effective than bubble wrapping against Drop pod armies though can still be utilized.  This is best against armies that don't have a way to mitigate scatter when deep striking.  Your goal with this deployment is to give your opponent a lot of bad options and significantly increase his chances of a deep strike mishap.


Rather than tightly packing your forces to leave no room for deep strikers with meat shields around the edges, as in bubble wrapping, you are going to spread your force out in layers.  Layering your forces does a couple of things.  The first is allowing you to cover more ground, but second is to also have units that can plug holes and counter units that penetrate your line.  Against a deepstrike heavy army, this also makes it hard for your opponent to easily deep strike in.  You want to leave room though, this is critical as you want him to try and deep strike in.  But importantly you don't want to leave a lot of room.  Just enough. 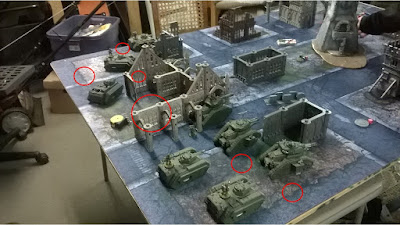 As you can see, the majority of the open spaces between units is about 6 inches to the nearest unit.  Thats enough for a unit to make it in with no scatter or very minimal, but is very easy for a unit to scatter within 1" of one of your units, or off the table edge.

In the center I have a larger area, but its also away from most of my units as well, so while it is a safer spot for deep striking, there are less targets to go after.  The bane wolf is in the back on its own, meaning my opponent will have to focus on it only and hope for the best, or leave it alone and hope enough survives to take it out later.  Multi charges can be devastating for vehicles, as a single unit can reliably wreck multiple vehicles in single combat.  Deploying in depth also helps in this regard, but only to a point, as a lucky deep strike will get them in position for a multi charge.  What you want to do is minimize what he can multi charge and limit the impact that will have.  Have units available to take out those units when they come in.

In this specific case, by putting the tanks up front with infantry on the flanks and behind, I am giving my opponent bad choices.  He can safely deep strike in front of my tanks, hoping to scatter not too far out of range.  Or can deep strike inside your lines and take the chance with mishap.

On your following turns you are going to need to keep your formation together, minimizing the openings till you have dealt with the deep strikers.  Keep mobile units to plug the gaps and utilize board edges to your advantage.

This works best on hammer and anvil and vanguard deployment, as you'll have less board space to cover.  This can be done on all deployments but the above work the best.

Advantages over bubble wrapping is board control and mobility.  This spreads your army out more giving you more opportunities for objectives in maelstrom and if you are not able to destroy the deepstriking unit, the ability to move away.

Bubble wrapping is great when it works, but it also concentrates your forces making it easier for your opponent to charge from unit to unit.  And if your transports are too close together, when they are destroyed, you may not have room to disembark.

This allows you to increase the risk of your opponent deep strike, while giving you the most mobility and board control.  Redundancy is key as in any guard army.  Your going to lose units and can not afford to have one thing that is critical to your army working and winning.

Now against drop pods, this is going to be difficult as they won't scatter into your units, but they will scatter off the board, and the units still have remain 1" away from your units.  So if you leave room for only a drop pod to fit, but none for the unit to disembark, this helps to minimize the damage, and again, deploying to take advantage of board edges.  This also can help you simply drive away from them, as drop pod units are not mobile once on the ground.  Against deep strike armies, you are fighting for time and space, as space also equals time.  You want those units to have as little time as possible to hurt your own.

There are quite a few units that can assault from deep strike now, and this gives you better options to deal with them compared to bubble wrapping in most cases.  Bubble wrapping works great when you have a turn to shoot and possibly counter charge that unit before they can get in and do the most damage.

Nothing works perfectly and this is no exception.  But it is an alternate tactic for dealing with deep strike armies and units.

Posted by Grumpy Guardsman at 11:00 AM