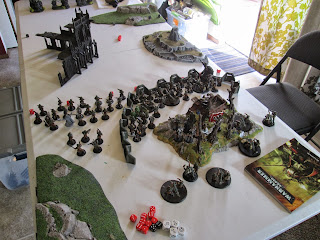 Alrighty, so following my back story of my army here is what I am currently running, with minor tweaks sometimes but the core remains the same.  All guard no allies at 1850 pts

So how this army works is the first three vet squads man the aegis line with one of the lascannon squads manning the Icarus.  I have gone between that and the quad gun but i have found it pairs really well with my lascannon vet squad.  Plan is at 2000pts bring a second aegis for the second lascannon, to double up both squads.  They form the backbone, with my CCS spread in good positions to give orders and overlap their buffs.  Mortars get a good spot and lay fire to try and pin infantry.

Platoon I use as my screening force, they either move in front of something nasty to act as a speed bump, or try and assault a weak unit that my opponent deployed a little too far forward.  Now I either Scout my Vendetta squadron or the platoon, really depends on opponent and mission but it allows me good flexibility and options.

Last two vet squads along with marbo are my ace's, marbo gets thrown where he can make the most use of his demo charge and maybe even survive a couple of turns.  Great part is he scares most opponents into at least wasting one or two units of shooting if I am lucky.  The Vendettas clean up whatever armor and MCs or termies need killing, then drop the squads on the critical point I need them at.  The melta and heavy flamer means I can deal with most threats and they have done great in almost every game.

So far I have not lost with this army, and I know a time will come.  My early firepower really depends on my two MoO doing damage early on and I usually try and pop transports with my las for my MoO to finish off the passengers. This army really isn't an alpha strike though, and big part of my tactics is getting those vendettas on as early as possible, when it works well I usually overwhelm and cripple my opponent when everything comes on turn two, there is just too many guardsmen and lascannons at that point to chew threw.  I have won two games with over 50 dead guardsmen, it def is not a list for those that like keeping their men alive.

Against tau, my tactics are too use my barrage early on and try and pin/destroy pathfinders and markerlights, and their infantry.  Then once the big guns move on I go for the heavier stuff.  Its worked well so far.  I like it its a tough army to play and though it can put out a lot of shots, it can fall apart as I really depend of orders with all the infantry.  Had some tough back and forth games, def more fun in my opinion than clean sweeps.

Ok with that said.  Let me know what you all think.  Take in mind this is my fluffy army, not geared totally toward competitive, even though I try to build a good army even if it is fluffy.

Posted by Grumpy Guardsman at 8:40 PM