Some thoughts on gaming after a weekend 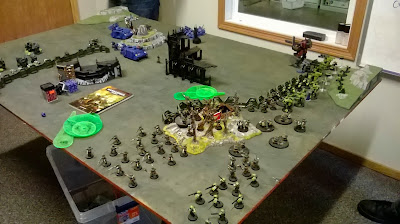 So I have been busy lately and had a lull between posting.  But I have not been idle, as the pic will attest I have played a game with friends over the weekend.  Team battle, was a little lopsided, but we rolled randomly for teams,the dice gods were cruel though. IG and Tau vs Grey Knights and SM, so there was a lot of firepower on my side of the board, and not so much on the other.  1000pts each so nothing to crazy for each side though my Tau buddy still had plenty of shenanigans to play.  Now I only took one pic so this won't really be a bat rep as much as a discussion of tactics and theory hammer, using examples from the game.

The Game
Well the short of it was we won, not many readers will be surprised by this, its hardly shocking that the 2 most shooty armies in the game won against the Space Marines.  But they made some mistakes that led to their defeat far quicker than should have  been the case.  First off it was night fighting turn one, which affected everyone except for my Tau buddy(non-battlesuits excluded).  More importantly we went second, which actually is a good thing for a shooty army with night fighting.  A lot of my stuff was just out of range at the beginning of their turn, but after they had moved there was a lot within that 36" bubble.  And this may sound counter intuitive, but you don't want to just charge straight at Tau(Insert other shooty army).  If you don't have the armor or model count to take the wounds, you won't cross the killing field fast enough.  The other thing that they got caught up on was that we were playing the relic mission, so their was only one objective.  Instead of playing the game, they played the armies.

What I mean by this is they tried to cross the whole field and get into assault with our right flank, with most of the tau.  However, all they had to do was send the rhino up to the objective for the tac squad to grab it with the rhino as a shield, everything else could have stayed hidden and out of range of most of the effective firepower, where our first turn would have been useless.  Tau would have got off a few shots with the riptide, the missile-sides might have as well, depending on range, but I would have only had two targets to shoot at with only a few units.  They could have started moving back the objective turn two and used the combat squads as meat shields and importantly would have forced us to come out of our gun line to take the objective.

Now here is where you get beyond math hammer and get into theory hammer and a little psychology, my buddy who plays the Ultra Smurfs has convinced himself that he has to get into my lines fast to beat me, that the only way he can win is by trying to overrun my aegis line.  While this isn't wrong, it also is forgetting one of the most important part of the game, and that is objectives.  You don't win the game by killing every model in your opponents army, you can, but against an evenly matched and experienced opponent this is unlikely.  Almost all missions have some sort of objectives. That is how you win.

They almost did it right, the rhino moved up, one of the GK squads moved into the bunker on the left, they had a good position to take the objective turn two with a delaying force to hold back our troops and provide cover with their bodies.  Now they had a fast army, two interceptor squads, a dread knight with personal teleporters, bike command squad with captain on bike, squad in rhino.  Almost all of this was coming onto our right flank, towards the tau, what they should have done was move across, getting behind and to the other side of the building on my side, coming after me.  The interceptors would have burned quite a few guardsmen, as well as the dread knight doing its thing as well, meaning my flank would have been hurt badly and I would not have been in a position to move forward after the objective, and with only minimal return fire with too many targets to be effective.  This would have also forced the Tau to move out to try and get LoS and make a play for the objective.  The bikes would secure the right and anchor off the building and hit any tau that tried to move up.  Then they could have move the relic back with ease and with enough troops to cover their retreat.  We would have been in a position of trying to hold our position and try and get through them to get to the relic.

By no means would that alone have won the the game.  But the point I am trying to make is that they played our armies and not us.  They made the mistake of trying to beat our armies and played to our strengths.  They came all the way across the board, across our entire front all spread out but concentrated no where and were easily slaughtered.  This was by no means an easy match for them but they did not play to their strengths or to the mission.  This is a mistake that a lot of gamers make and takes a lot of painful lessons to learn.  You want to have your opponent react to you and not the other way around.  When you are moving and thinking about your turns, do so in a way that is going to force your opponent to react in the way you want them too.  In our case had they rushed up, grabbed the relic and then moved back, we would have been forced to foot slog it across the board to get the relic.  They could have shot us the whole way and assaulted when we got close.  It would have been a far from certain outcome.

Strategy and Tactics
Now I want to go over tactics and a little bit of strategy.  First lets get some terminology straight, Strategy is everything you do up to the point to place a model onto the table, once you start moving models you have entered tactics.  Tactics are what you employ directly with forces and units on the ground to defeat the immediate threat.  Strategy is farther reaching but less specific, how you build your army and how you plan on using it in general is your strategy, such as going for a fast assault focused army.  The difference being that when you move that bike squad in a certain way to assault your enemy's unit, that is tactics.  Sorry but I am in the military and I hate it when people use strategy in the wrong ways.

I won't go over too much strategy it is going to depend on how you like to play and lots of other factors such as the meta you are in.  The tactics you use combined with your overall strategy is what you use to win.  Now a lot of players take a while to develop a good tactical patience, this meaning letting the game unfold and committing when the critical point is reached.  The biggest part is thinking about what you want to do turn 3 and 4 on turn 1.  Meaning don't go charging across or try and shoot everything on the first turn.  If you want to seize the critical objective/s on turn 4, look at what you are going to need to do in order to accomplish this.  Note in our game, we ignored the Thunderfire cannon and whirlwind, focusing on their scoring units going for the objective, and removing their heavy hitting bikes and assault units.  This left them with nothing but a few scattered combat squads with 2 or 3 guys and their artillery which could hurt us, but could not win them the game.

Remove what can win the game (scoring units) and what the enemy has to remove yours is your top priority.  Focus on what ties the army together and break it apart.  Strategically plan what you want to accomplish each turn to reach your end state.  Then put your strategy into action with your tactics, move and shoot at what needs to be removed.  This is not always the big monster, most times the big MC is there just for the purpose of tanking and doing as much damage as possible while absorbing as much as possible and letting the rest of the army roam freely.

Another huge thing that many players miss the mark on is objective placing. This is by far one the most important stages of the game, where you begin to enact your strategy and turn it into tactics.  This is also where you get to gain the initiative and have your opponent play to your tune.  Lets say you are facing a Tau army, its shooty as all hell, but weak up close.  Don't go placing objective near their gun line, place them in good fields of fire in front of yours.  Note in front of not in your line, because it doesn't matter how many objectives you hold turn 1, but how many you have at the end of the game.  Force your opponent to pay for them and to have to play against their weakness and not their strength.  Now in most games you will both choose so they will get a choice as well, but place yours in a place that you can seize by the end of the game and force your opponent to pay heavily for and cedes you the initiative.

Now lets say you are facing a fast army, with bikes or wave serpents, whatever method is being used the army is going to be across the board by turn 2.  Well negate that by placing the objectives in their side, note not necessarily in their deployment zone.  Placing it near the mid field but on their side slightly means they are going to have to decide whether to keep on going and go all in after your army, or hold back and defend the objectives.  In a lower model count army this is especially effective as most times players will try and do both as my friends did, but not have the army capable of being effective at doing both, they need to go all in or hold back, if they go in piece meal, they will be destroyed piece by piece. Put your opponent in situations where they will make mistakes and bad decisions.  And if you think that you can't take objectives far away, an infantry unit has a potential 60 inches of movement in 5 turns of play, taking into account running, note: potential.  So that objective on the other side of the board really isn't as far as it seems.

The best advice that I can give anyone is that you need to be setting the stage for your 3rd and 4th turn on your 1st.  If you don't you will be reacting all game and will most likely lose because of a bad dice roll and a good player.  DOn't leave yourself ina postion where that one roll could lose or win your the game.  Play the person across the table, not the army on the board.

Hopefully this is news to someone and I am happy to discuss any questions or specifics in comments below.  Happy gaming.


Posted by Grumpy Guardsman at 6:33 PM