Sniper Rifles...I Want to Love Them 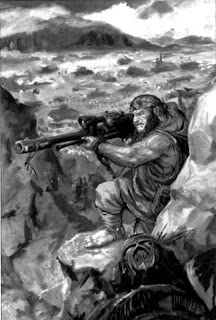 As the title would suggest, I want to love sniper rifles.  They should be really good, they have decent rules for them.  They are precision shots, rending, and pinning, all very good things.  But time and time again they have failed to truly do anything.  For the guard there are two main problems with sniper rifles, this having to do with how the weapons themselves work and how the stats of a guardsmen fit into that.  First sniper rifles have no BS modifiers, which is fine but with a BS3 army (a few BS4), your hitting 50/50.  Then you have to wound, which is always on a 4+, so agian 50/50, so if you have three sniper rifles, you are lucky if you even get one wound out of that shooting.  This becomes a numbers game and to use them effectively you need to get them in large numbers to get through this numbers guantlet.  Personally I think they should wound on a 3+, this is more realistic to the sniper rifle's effectiveness when it actually hits, plus since most are in the AP6 to - range, this won't upset the balance.  You would still get armor saves most of the time and rending wouldn't change.  I just feel that most of the time sniper rifles don't perform.

Now I will admit that part of my troubles is because I refuse to use the 'dedicated' sniper unit in the IG codex.  The fucking hobbits.  Sorry if you like them but I think they are dumb.  Now not to say that the rules for them are dumb, just that space hobbits are, and the fact that not all guard regiments have these fuckers, so there should be an option for snipers that is feasible.  And no special weapon team snipers are almost worthless, 3 snipers at BS3, wow amazing, you may get a hit, maybe two, and if you are real lucky you might get a wound.  The other options are with PCS's which has the same problem in that they are still BS3.  Now CCS have BS4 and could take 4, but there are other better weapons and options you could take.  Now I have toyed with Vet squads and they can be effective, but it is still only three sniper rifles with the rest of the squad still having lasguns.  Now I have used harker, with another heavy bolter and three sniper rifles plus have infiltrate and stealth, not too bad.  But its also not cheap to do that.

So what I am thinking of doing is converting some guardsmen to use as 'ratlings'.  They will be normal looking guardsmen essentially, but I'll use the rules for ratlings.  They aren't terribly expensive and have decent rules, though they are T2 which sucks.  But that may be ok.  I really just want a good sniper unit.  My other option is to wait and hope and pray that the new codex will have other options other than ratlings for effective snipers.  Rumors that the vet squad will start at 5 could be just what I am looking for.  Load them up with sniper rifles and have a small cheap squad for sniping.  With good BS and if kept cheap that can work.  I will see.

It is a shame really, becaues sniper rifles should be very effective, but in my experience they are meh at best.  I don't like depending on 6s.  Now if I could twin link them against any target then it might be different and that SWS wouldn't look so bad, but as it is now that only works against MCs, which isn't so bad, but P gun will still wound more often against most.  And against vehicles I have to rely on 6s.  This is ok if I have volume of fire to make up for it, but since I don't its just about useless when it comes to sniper rifles.  For me it just bothers me that you need large squads of them for it to be effective.  Thats not how it should be, small teams should be fine.  But sadly that is not the case.

So who uses ratlings?  How do you use them?  I have never used them before and will never have a hobbit model in my army.  I have been able to sometimes get effective use out of them in veteran squads but I just can't get enough. SWS suffer from poor BS, and CCS just seem like a waste to throw sniper rifles on them.

Anyways, I want to know what you think.  If you have found a way to effectivelly use them then I am all ears.

GG
Posted by Grumpy Guardsman at 10:17 AM