Space Marines And Their Toys 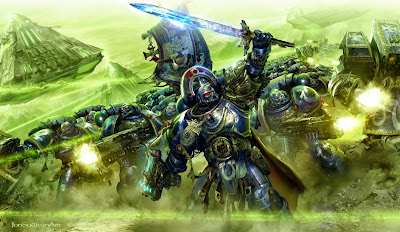 Yes I know I am supposed to be an imperial guard blog, but I play with space marine players a lot, my brother being one and also a couple of my friends and regular opponents.  Playing with and against these space marine players I have noticed a few things about them that are unique to them (for the most part).  The biggest one, and the one I want to talk about, is that they LOVE their toys!  And they love to bring lots of them.  This isn't a bad thing on its own, but I have seen my buddy add wargear and weapons to his units without really thinking about whether what he is adding is worth the points and increases the effectiveness of the units he is adding them too.  I want to be clear that I am not knocking on marine players in general, its more of a puzzlement that I have in why a lot seem to do this.


By no means do all SM players do this, but I see it so often still when playing against them and watching batreps.  This does not occur much in other armies, except Tau perhaps but what they get is so worth it why the hell you wouldn't take those upgrades is beyond me.  Now first example I have is I just recently watched a Batrep of a Ultra army vs eldar, and the guy was complaining about how sterngaurd were more expensive now because they increased the cost of combi weapons.  I have seen this on the interwebs more than a few times as well and it boggles my mind.  Sternguard are amazing already, they don't need combi weapons, that is a points sink for what amounts to few extra shots at one time.  Why though?!  They have specialty ammunition, which gives you almost everything you need to kill almost every infantry unit in the game.  "But what about vehicles? I need combi meltas in case I run into those."  No you don't, stop trying to make them into more then they are, which is a kick ass anti-infantry unit.  They have krak grenades so if you really need to kill vehicles you can run up and punch them if you need to.  Otherwise stop putting points on them you don't need, if anything give them a heavy flamer, that is by far the most effective upgrade, especially since most sterngaurd are ridding into battle in drop pod.  "But it's not ap3" No it isn't but Tau and Eldar are not fans of AP4 and they are the big boys on the block right now.

I generally believe you shouldn't build towards a specific army to fight, but if your meta is heavy one way, you should lean in that direction at least.  With the new SM codex you can do this very easy, it truly is an immensely flexible army.  However it is also an easy army to spend lots of points on.  You are facing a horde and GEQ heavy meta, flamers and blast weapons in every squad!  But do you really need to do that?  In most cases you can save the points and put them in units that are worth the extra points and save them in the squads and vehicles that don't really need them.  Tactical squads are probably the best example of this.  IMO heavy weapons are a waste in them, for the most part, they are a mobile unit and have a good anti infantry weapon, a heavy weapon tends to anchor them and you can have a whole squad being wasted just to fire that missile launcher.  If you want anti armor punch, a melta gun is far more useful for the points.  Unless you plan on holding these guys back I would stay away from heavy weapons from them and put them in devastators or other heavy support.  The other thing is special wargear for the sergeant, now this is bit dependent on how you use them, but my rule is you shouldn't take something because you may run into that one unit one time where you are going to need that one item.  If you plan on doing some monster hunting, then by all means take a power fist.  This doesn't mean though that you take one in every tactical squad.  An army works best when units have specified roles within the army.  Tactical squads are generalists, they work best when they lean in one direction or the other, and if all you plan on doing with them is fight infantry and taking objectives then throw a flamer in there and call it a day.  You'd be surprised how effective your units can be when you don't spend points on them.

Another thing that my buddy has done and I have seen others do is the choice of wargear they take over others.  Will spend the points on relics for his captain but never takes the auspex.  This is probably one of my favorite additions in the new SM codex and I have honestly never seen it used yet.  Reducing the cover save of a unit can be huge though and for five points is a great addition.  Sure the relics are great but do you really need two of them on the same model, or three if you take the armor.  That is so expensive!  Why?!  When you are facing opponents like guard, eldar, tau and others that rely on cover saves, taking something that reduces that advantage is huge.  I have an aegis defense line and losing the 4 to 5 plus is a big deal, that can mean the difference between a few guys dying and a lot.  Spending points on force multipliers is always a good option, rarely will a single model win you the day, but having a key enemy unit's survivability reduced can win you the game.

I don't know if I am the only one that see's this, but it seems to me to be pretty common.  As a guard player this is a foreign concept to me as guardsmen are not really worth spending points on, I would rather bring more of them.  It is just weird and puzzling to see the opposite in SM players, dumping expensive upgrades into an already expensive unit.  I hope no one takes this as me putting SM players down, because that is not my intent at all, its just my puzzled frustration when I see someone do this and I want to shake them and yell "STOP!"  With the SM army specifically this really is one of its biggest traps.  Other armies can have this but guard, for example, are already cheap so you have room to spend points on a few units.  SM just don't have that room, I think some think they do because of the needed price reductions that they received, but then you completely counter act that reduction by spending all these extra things you really don't need.

Hopefully I'm not the only one out here that has noticed this and if you find you have fallen into this trap hopefully this helps you spend your points better.  To be clear I have fallen into this trap from time to time, but being guard the points are more forgiving and it doesn't hurt as bad.  SM do have some great gear and options to take, you just don't have to take ALL of them!

What do you think, am I overstating this or not?

GG
Posted by Grumpy Guardsman at 11:58 AM