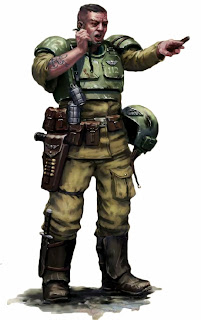 The Master of Ordnance is a controversial unit for guard players, many think he is worthless and others really like him.  I will admit I have been on the fence about him, but as I have used him more and more I have found the MoO to be an invaluable unit if used the right way.  What you get for 30 points is a S9 AP3 barrage with unlimited range.  That is the first thing that is nice about him, anywhere on the board can be hit, line of sight or no.  Now where he comes into the down side is that he scatters, alot.  If a hit is rolled, he still scatters that distance, if an arrow you roll another D6, for a 3D6 scater and with only BS4 that is hard to counter that potential for large scatter.  But as I have found out, there are ways to make him more effective and lets be honest, your getting a basilisk for 30 pts.


Now one great way to use the MoO is in pairs, the "downside" being you have to take two company command squads.  This IMO is not a bad thing, and at 30 pts you can easily take two without losing a huge portion of your army.  This actually opens your army up more, as you no longer need to take basilisks or leman russes for your heavy pie plates.  And the other adavantage is that MoO can be affected by orders.  Now some may not like placing your trust in these guys, but in general if they are not targeted directly, they will survive much longer than most basilisks or other heavy hitters.  He can be hidden and with other targets in your command squad, others will often take the brunt of fire before he does.  When you are dropping a minimum of two pie plates a turn, its hard to miss and not see those affects.  It also maximizes the number of ordes you have to use because of the extra command squad.  Now this works well with infantry heavy lists, but I would not recommend going double if you are going armor heavy or plan on moving around a lot.

To get the most out of him and have a master of ordnance and not a master of misses, you have to do a couple of things.   One is to use him with line of sight as much as possible, and Two, take advantage of orders to increase his chances of either hitting or wounding.  The first seems pretty simple, but it can be easy to fall into the habit of using him against models out of line of sight, but this removes the two things you need for him to be effective: Line of Sight to reduce scatter with BS, and orders that require LoS to be used.  Simply put he can be quite accurate against MCs and vehicles, because of Fire on My Target, this means you can reroll and you can use this multiple ways.  I have found that reroll to be key, being able to turn a complete miss into at least a partial. This is even better against vehicles because as long as the blast is partially touching it takes a hit.  Most of the time you'll hit on side armor too because of barrage.  With two dice for armor pen and taking the highest, you have a high chance of penetrating most targets.  Many in the game have side armor 10 or 11, and a few 12, then there are the big ones with 13 and 14 that you should ignore unless its all you have.  Last game I played I destroyed a vindicator and destroyed the missiles on a whirlwind first turn, neutralizing my opponents two major hitters.  I was lucky and had line of sight, the whirlwind could be seen through a window.  Even though my opponent thought he was safe behind a building, he neglected to make sure that there was no LoS to my units and my MoO brought it down right on top of it and took the whirlwind out of the game.  This is why it is critical to use them with LoS and orders.

The art of getting use out of him is choosing your targets carefully and mitigating the weaknesses that he has.  Namely his scatter, because when he wants to, he scatters a lot.  Now a great way to use him is to targe a vehicle, esp the transport of a squad that just disembarked, and use the vehicle to gain twin linked through orders and walk to large blast off the vehicle onto the squad and get both.  Now you will only rarelyget both the vehicle and the whole squad.  But you can take out the transport and a number of the squad with one blast.  The reroll gives you higher chances of getting the result you want.  The thing to remember that you don't need the blast to scatter directly off, just in the general direction of the squad.  This is still chance, but you have rerolls and that is a good thing.  This also works great on MCs as they are generally smaller base wise and you will have units closer and therefore a higher chance of getting units under that pie plate.

Where he can also be great is in killing squadrons of vehicles, esp weak ones and take advantage of the large blast, barrage, and ordnance.  With twin linked you reduce your scatter and if you score three hits, you are almost guaranteed three pens againts weak vehicles.  Don't use him against heavy vehicles like land raiders, unless that all you have left to shoot at it, with only ap 3 you need  a natural six to destroy it and a six to pen, counting on a lot of luck is not how you win battles.  Save melta guns for those, take the auto kills for the MoO when you can.

Against infantry, he is great when he works.  But since you cannot twin link him againts infantry the best bet is to target vehicles that are close and get the infantry in the blast as well.   He can be good against large or spread out squads, where you have more room to play with in scatter.  This is another reason to take two, the chances of you hitting and causing the damage you want goes up when you have a back up, if the first scatters 18 inches, you have the second one to make up for the first ones miss.  Now also pay attention to the units around it and not just the one you are targeting.  If you target a unit that has multiple units around it, preferably all around it if you are lucky, you have given yourself a guaranteed hit.  It may not be the unit you target, but with S9 AP3, most of the time things are dieing.

I have grown to love these guys and the more I use them the better they are.  Their low points cost is their huge selling point.  What they allow me is freedom to take more infantry or other units and not to worry about taking an expensive heavy hitter to counter MEQ and other heavy armored units.  Plus it is fluffy with my Infantry IG army.  Having no armor or artillery in my army, I still need heavy hitters though to cause mass casualties.  MoO give me that.  I would recomend them to every IG army that plans on having a sizeable portion of infantry.

Well what do you guard generals think.  I know I think he is worth it.  Let me know of other ways you have used this guy to get around his lack of accuracy.

Posted by Grumpy Guardsman at 6:14 PM