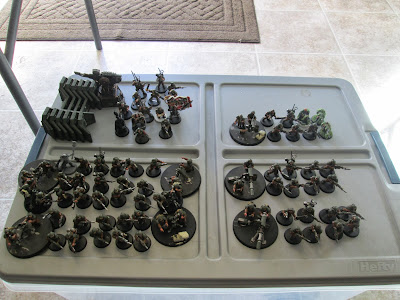 So I realized I have err'd, all this time I really haven't talked about my army and its history.  Sorry about that.  So I have been collecting Imperial Guard for over 10 years now and the above is only a small part and example of what I currently have.  As over a decade of collecting will do, my army is mostly uniform in colors, but I still have yet to finish basing.  Part of this is due to buying new models, selling old ones off and such.  Bur it is a labor of love, and the 20+ black guardsmen sitting in a pile waiting to be painted are giving me accusing stares, slowing going to get through them.  As I'm sure most of your armies, mine has grown as cash and game needs allowed.  But my infantry count still far exceeds my armor count, but it is getting up there slowly and one day I will have my Armored company, Mech company, and air assault company.  For now I will have to make do with an infantry army with a little support from everything else.

The Cadian 438th Shock Infantry
This is fine by me!  I like infantry armies personally and have been rolling my foot sloggers for years before it was cool and mech was all that.  Now on the the good stuff, the Cadian 438th Shock!  I always loved Cadia and the idea of children raised from birth to fight in the Imperium's wars.  In my mind they are a bit above the ho hum guardsmen most worlds can field.  Equipped with the best equipment Cadia can offer and trained since childhood, they are ready to crush the Emperor's foes.

The 438th has served Cadia and the Imperium since M34 and is noted for only being reformed six times over the millenia.  It distinguished during the Age of Apostasy and was among the many guard regiments fighting for the return of proper Imperial rule for mankind.  They Served notably in campaigns to drive hertical armies back in Segmentum Obscurus and fought in many campaigns against the Tyranid menace along the eastern fringe.

The 438th Shock has also had the dubious honor of serving alongside the Holy Ordos in sanctioning renegade chapters or renegade elements that have cut themselves from their parent chapters and turned their light from the emperor.  The 438th excels at quick assaults, engaging their and fixing them with long range fire power and then moving rapid insertion forces in to finish their targets.  The Regiment has closely served with elements of the Imperial Navy and has developed skills working with Naval Air support and aerial insertion tactics with the support of the Navy's valkyries.

That is my army's brief history and back ground.  They do not have a current commander at the moment and are seconded to the Lord Castellan.  The idea behind this army is elite infantry heavily armed and armored with air support to provide mobility and additional fire power.  As Cadia produces excellent soldiers, my regular infantry platoon is my conscript/whiteshields, mainly because I can give them options and I see cadian teenagers the equal of most trained guardsmen.  The rest of the Army is veteran squads with carapace armor, this is to represent their role as a Shock Regiment, and it works well on the table as well.  I like the fluff of this army and how it plays, it still has lots of infantry to through around but most are pretty good and having most of my army at BS4 makes a nice difference.  From a fluff perspective my company command squads act as platoon command squads (in my head) since veterans don't benefit from the platoon structure.

Sorry I don't have more pics but don't have many good ones right now.  Will add more in future.  And as a note the army's history is based on the battles I have fought and rivals I have had.  One of my first gaming buddies played Tyranids and Blood Angels, so I gained a lot of experience fighting them.  I'm sure I'm not the only guard player out there that has been shoehorned into being the "heretic" among his buddies, as they being space marines could of course never turn from the emperor.  I call BS and refuse to play the bad guy for them, so I hunt down and destroy their heretical and prideful asses for emperor!  I play with a lot of SM players if you can't tell.

Anyways hope you all are having a good week and happy gaming.  The Emperor Protects!