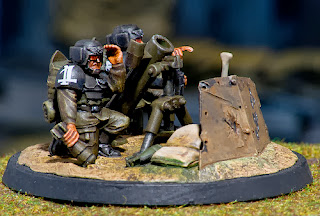 So I have another tactics article, I have played a few recent games and since I have been playing I want to put these tactics down while it's still fresh in my mind.  Let me be clear, I love mortars!  They are one of the most effective weapons for their points.  They are versatile and when used correctly, devastating.  As the cheapest heavy weapon and weapon squad, there are few reasons not to take them.  Barrage and pinning are powerful, especially with the orders available to make their shooting even better.  For me I find mortars to be effective with two or more squads being taken.  This means you have a second unit to make up for a bad scatter with the first, can spread your fire without losing effectiveness, and can concentrate when needed.  Another benefit of them is that your opponent is often going to be more afraid of your lascannons, plasma guns, leman russes, and all your other "big" stuff, making them a low priority on your opponent's list.  This means they will be left unmolested for a good part of the game to fire uninhibited.  Even guys I have played against multiple times will make the mistake of letting them be, and then regretting it later in the game when their units are being whittled down and being pinned.  While many armies have ways around pinning, but when those fearless units are gone and other buffs/rules that ignore pinning are gone, those units can be very susceptible to being pinned.  A space marine army isn't very scary when two tac squads are pinned in the open.

Mortars & Orders
Mortars on their own aren't that amazing, S4 AP6 isn't bad but isn't amazing either.  Where mortars start to get better is through orders.  One in particular is very effective when used to target the right units.  Fire on my target is the order I am talking about, it makes the targeted squad have to re-roll passed cover saves.  This can be very good when used against the right units.  A good example light units that have stealth and more often than not have a better cover save than armor.  Using this order in conjunction with mortars against one of these units can be very good.  Now you can mitigate the units cover, maximizing the chances of those wounds actually killing these models.  With Tau pathfinders being a unit that falls into this category and how important they are to the synergy of the army as a whole.  Mortars a great because these units are easy to wound and they are also relatively low leadership as well.  The key is to also take into account the effects of mortars being a barrage weapon.  Only one model has to die to incur a pinning test, and against a low leadership unit this can take a unit such as pathfinders out of the fight.  This also means you don't have to focus huge amounts fire power at a unit to neutralize it.  Pathfinders need to use those markelights to be effective.  Scout snipers aren't effective hugging the dirt.  This can go on.  The point being to use the mortars with this order to maximize their effectiveness and take advantage of barrage.  Note this works well against non MEQ bikes as well who rely on their better jink save vs their armor to get them across the board.

Another order that is good when used effectively is Bring it down.  Now you have to use it on an MC or vehicle and against vehicles this isn't as effective.  But many MCs don't run alone, they also tend to be surrounded by other units as well.  This turns your mortars into precision shooters and increases the chances of getting a hit.  Because they are barrage, it is key to have as minimal scatter on the first roll as possible.  Now this can be effective against small vehicles as well, such as walkers, if they are close to infantry units as well.  In this case you don't want the hit, you want to use the walker or small vehicles to walk your fire off of.  This may sound far fetched but have a second roll means if your scatter or hit is going to miss, you can roll again and with two rolls stand a good chance of getting the result you want.  This really is only effective against small vehicles and MCs that have infantry close by.  Against MCs its more effective because at least if you do hit you stand a chance of wounding it at least.  I have only used this a few times but it can be very good when it does work, not this also works very well with the master of ordnance.

Mortars & Support
The other thing to remember with mortars is that they are there to support your army.  Where they are very good at is when they are used in conjunction with lasgun fire.  Now I touched on this in my last article but it is worth noting again how using lasgun fire to weaken units to that critical point where mortars can tip them over the edge and increase your chances of causing a pinning check and ending the effectiveness of that unit.

Mortars also work well in supporting your infantry when it is charging, since they cannot fire lasguns and charge, this means that unit will only be using a few shots from assault weapons and won't have much fire to increase its chances of succeeding in the charge.  Now this is where mortars come in.  You fire them at the unit you want to charge and make up for their lack of fire, and weaken it to increase your chances of winning the charge.  Where this is effective is because of barrage, wounds are allocated on the hole, not direction of fire.  So you can reduce the squads size but not increase your charge range by have models in the middle and back suffer the wounds.  This also means they will have to take a pinning check, that can be the difference between swinging first or last, and with guardsmen low initiative, this is a big difference.  Also try and use the benefits of barrage to target characters and flamers, the squad losing its auto hit over watch weapon or only combat model being a huge effect on the ensuing assault phase, this is far more important for them to lose their sergeant with power weapon and flamer, then to kill four regular guys, the effect those models having on combat being far higher than the standard troopers.

They also work great in the opposite roll, stopping enemy charges.  Again what this all boils down to is taking advantage of the fact that they are a barrage weapon.  One wound causes a pinning check, and if that unit fails, it has turned from a big scary unit into a target waiting to die.  Now be aware what you are shooting at and don't go shooting at fearless units and wonder why they keep on coming.  Now against units like orks or tyranids, the key to taking advantage of this is using other weapons in your army to remove that "fearless" i.e. mob rule and synapse.  Using lasguns to whittle the orks down to a point where the mortars can cause enough wounds to get them under the fearless threshold, and to use other weapons to remove the synapse threat and then use the mortars on the now un-fearless squad.  And if all else fails, use mortars to try and pick off combat characters and special weapons with barrage to make that assaulting unit less scary.

When compared to the next pinning infantry weapon, sniper rifles, there is no comparison.  With BS3 guardsmen, you need a lot to be effective and with wounding on fours, you just don't stand the chance of doing anywhere near the amount of damage compared to mortars.  When compared to other anti-infantry weapons, the heavy bolter and autocannon, you can see that mortars are for their points better at the job of killing infantry.  You lose some versatility but gain specialization.  Sure a heavy bolter squad has nine shots, but with guard BS your getting four hits most of the time, and then you have to wound.  With autocannons its worse, three hits and then you have to wound.  I have had mortars many time pull of 12+ hits on a regular squad, and the more chances you have at wounding the better.  You lose the ability to threaten any vehicle besides armor ten, but note that anything with side armor ten is in your threat ability, as they follow barrage rules and hit on side armor unless they scatter in front of the vehicle.  Now this is a worst case, but can be effective against squadrons that are bunched together and you can get enough hits with barrage to give a chance at getting a six or two.  Again this is more of a long shot and not something to hinge your tactics on, but if its the last thing you have then why not, keep it in your tool box.

Well I hope you find this useful and if you have a used your mortars in other ways I am all ears.


Posted by Grumpy Guardsman at 8:56 PM