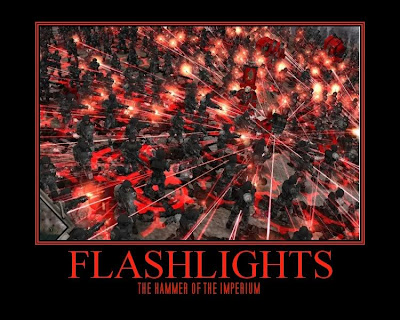 In Short I Want More of the Above

Well I may want a few more things than just more flashlights.  The current incarnation is a really good codex minus the elites section.  Fast attack is pretty good, sentinels could be better and I won't even discuss rough riders.  Penal legion are fluffy, neither great or bad, though I hate random and would would rather be able to choose.  Heavy support is great and I really see no need for change minus points and a leman russ special rule.  Overall what the Imperial Guard needs is some tweaks and some cool new toys similar to what other codex's have received, and though I know it won't happen, some way to counter all the ignores cover that is out there now.

Rules & Wargear
Over all the rules for the guard are pretty good.  Orders need to stay but could definitely use some tweaking.  There are quite a few that see little use, I don't see the need for them to go away, but some adjustments to make them more useful would be nice.  Fire on my target could be changed to cause ignores cover, instead of what it does now.  Considering how much ignores cover there is this is not unreasonable.  Incoming  isn't bad, but with an aegis already giving this bonus and ignores cover, it really isn't useful, this could go.  A new order like Fix Bayonets-gives counter attack or rending and counts as def grenades(maybe), balancing could be they lose one shot for each weapon (lasgun 1 shot at 12", one shot weapons fire snap).  What would be great would be some cool one use orders like Fire on my Position, Charge!.  Fire on my Position would essentially be the same as the the apoc, but instead of the apoc template have a basilisk barrage.   Charge would be essentially for the honor of cadia but all officers could use it and it could maybe have another buff to it like rage/rending.  Thats really all I would like when it comes to orders.

What I would also like to see is something similar to the new SM codex for regiments.  Basically bring the old doctrines back but have them specific to each regiment.  There really wouldn't need to be much changes except updating the rules of the old doctrines to match the 6th ed special rules.  This would add so much variety and actually differentiate each regiment in the Imperial Guard.  What I don't want to see is Codex Cadia.  As much as I love the cadians, they aren't the whole of the Imperial Guard and don't need their own codex, that's what these new supplements are for.

For other abilities or wargear, I think an option for overcharging the lasgun.  Give it +1 to strength AP3 and gets hot, 1 shot only.  Make this a general, or just for veterans.  I know this is a long shot but it would be awesome.  Some more options for advisers, mainly the master of misses(ordnance), a servo skull that functions similarly to the chooser or the slain/allows him to scatter normally as long as it has line of sight.  He really should be a better shot, I mean a master of ordnance, not feeling the whole master thing as he is now.  I would pay for that upgrade.  Another unit that could really use an upgrade is stormtroopers, they really aren't that special for th points that they are right now.  Give them targeters, causes ignores cover or twin linked, options for different weapons and gear that regular guardsmen can't get.  Auspex is another.  Hellgun needs a boost, either make it assault or up its strength, S3 is pretty worthless.  Flash bang grenades would be another option that would be nice too, make them really useful and flexible as an assault unit(not same as CC).  Also an option for thermo goggles or something to ignore night fighting.  Last thing in general would be more rounds for the mortar, at least an illum round.  Give it a 24 inch radius and anything in that area can't benefit from night fighting. For weapons, I would love to see heavy stubbers as an option like chaos cultists have.  That's about all I can think of in general.

HQ
When it comes to hq the Imperial Guard are pretty solid.  Company command squads are good and only really need some points tweaks in their options and some more unique toys.  What I would also like to see is an option for a generic Regimental Commander, basically have a tiered system like the Space Marines have with a Chapter Master and Captain.  What would be good to go along with this is Regimental level orders that only they can use.  These could be a generic list or you could have a larger list that you could choose one or two from.  I really like this idea as they could be very specialized orders and could be used to represent different regimental tactics.  There is already a tiered system for orders, adding another layer would be easy and great and fluffy.  What could also be nice is a tiered system for advisers as well, have company level ones and regimental level advisers.  This would be another really nice and fluffy addition, giving you an option of how you want to play your army.  Have a regimental staff focus or a front line leader focus.

Commissars, well I like the lord commissar as is but would like to see something similar to the old 0-5 for regular commissars that you could attach to units, or could have them similar to tech marines in the new SM codex, one for every HQ.  One it would give flexibility and is limited so you can't spam commissars with every squad (does anyone actually do that).   Also would allow conscripts to get a goddamn commissar finally without having to take a lord commissar.  Make them useful again without having send in the next wave. Other than that, no real need for changes besides points, some cool rule updates would be find but they work well as is and are great and fluffy.

Primaris psyker, really I would love to see a specific psyker power chart for IG psykers.  Other than that nothing really can be said about these guys, they are good low/mid tier psykers.  For Techpriests, they aren't bad at all and don't really need changes.  What would be nice is access to some cool archeotech, open up their playability and give them more to do than repair vehicles.  Jamming abilities, force shields, really any cool weird tech that can add flavor and more play options.  Right now they are just so bland and there is no reason to take them if you don't have a large mech army.  Preists, they really need a points reduction and some good rules to go with them, zealot is the obvious choice, they might be playable and not just fluffy.

Elites
I have already talked about elites but will sum my feelings up on them real quick.  Marbo is great, I don't want him to go.  Ogryns need a good points reduction and I would like some options for them, maybe a combi ripper flamer or some special rule smash attack for their ripper guns.    Ratlings aren't bad snipers, maybe some special option or rule for them but other than that nothing really needs to change for them, I just wish I had another viable option for snipers besides them, I mean c'mon, the guard has to have other good snipers besides these guys. And for psyker battle squads, well a psychic power table for them similar to eldar warlocks(not in powers but style) would be nice, have the squad a mastery level 2 upgrade option as well.  Other than that I can't really think of anything.  I have covered storm troopers already, reduce points and more gear, lots more if possible.  An interesting note is that there is a rumor over on Faeit 212 is that there may be a new unit, engineer squads, this could be real interesting and I really hope so, other armies have seen an expansion of the elites section and the Imperial Guard could really use another.  Have some cool anti vehicle and siege abilities.  I hope this is true

Well that is it for now.  I will post the next part of my wishlist for the new guard codex shortly.

Posted by Grumpy Guardsman at 7:21 PM