Ok so my first battle report so bear with me.  This was a fight at my house, me versus my brother, so the scenery and table were what we had.  First off the table was about a foot and a half narrower than standard so we had a long narrow board to play on which narrowed our movement.  We played the Emperor's Will mission and Hammer and Anvil deployment.  This really narrowed the maneuver for both of us but worked in my favor as I had the men to prevent my brother from getting through anywhere.  Also need to note that my bother does not have a huge unit selection, dark vengeance DA and his Grey knights are solid for what he has but he has few options as well.  Now here are the armies 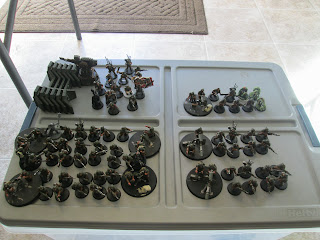 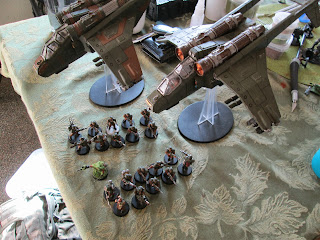 This army is my Cadian shock troop regiment, the regular platoon I use like conscripts and get into fights with smaller units that can't match their attacks or wounds.  The last two vet squads go in the vendettas that I outflank with creed's tactical genius, and the rest form my gun line.  Having played with both quad gun and icarus, I like the icarus more since I can twin link it with orders and I have had my quad gun fail to do anything too many times.

This was his mixed army, and he could only choose from so much so didn't have any real anti air except for land raider and predator.  Very heavy hitting and surprisingly mobile army but also fragile in that if a few pieces are removed he lost a significant portion of firepower. Now important to note first turn was night fighting and led to a very uneventful first turn.  I won the roll off but then the a hole stole the initiative and went first, which meant little except his land raider was immobilized right in front of my line instead of in his deployment zone. 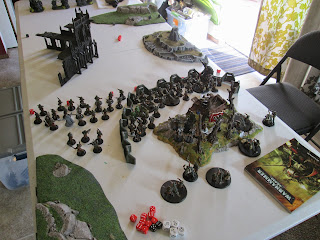 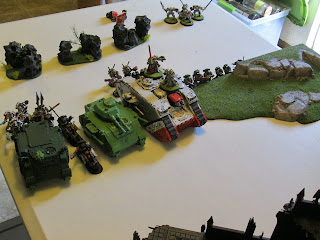 The standard bearers were the stand ins for objectives, they are hard to see but one is behind the line of rocks behind the GK/DA line and the other is in the middle of the area terrain in my area.  So brother stole the initiative and moved up, Land raider went flat out up the center, bikes and rhino did the same around the ruins towards my blob platoon.  Ended up only killing one guardsmen due to night fighting and the aegis line.  My turn I used orders and everything I could to try and do something but only managed to immobilize the land raider.   Master of ordnance decided to hit and killed two GK interceptors and the Predator, though to my misfortune the incinerator was a hair further than the other GK and he lived to punish me next turn.  Here is his end of movement phase 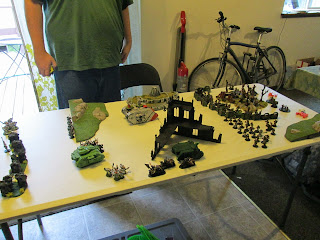 My assault phase was effective though, the platoon charged with the For the Honor of Cadia and had furious charge and was fearless.  I got a charge off and swamped his bikes and rhino, losing one guardsmen only, and scoring first blood.  I have used this before and it really is effective, swamping them in a tide a bodies and then the power axes striking back to finish whatever is left off.  The commissar with the power maul I'm not sold totally on but he did get a number of wounds off and I fight a lot of marines so he is theoretically useful. 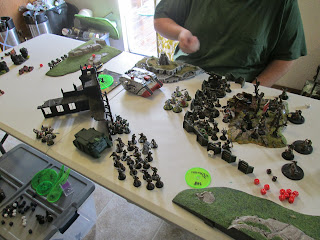 Now his turn did not go to well except for his assault. His deathwing mis happed and I got to place them in the farthest corner and they were effectively out of the game.  His Company master and tac squad disembarked from their dead rhino and killed a 7 guardsmen with their shooting.  Luckily it was only seven as he used lions roar but had some bad rolls and I got lucky.  His interceptors used their move and made it right behind my aegis with the termies disembarking and moving up to charge.  His combined shooting killed all but two guardsmen in my center squad and a few from the two next to them.  Luckily for me he forgot about rapid fire and was unable to charge with his Company master into my blob, this is where the tide really turned IMO as I knew my flank would hold and with reserves coming I could close the gaps the termies would make.  And they made quite a gap, killing one squad and doing damage to the two next to them and driving them off, thankfully he couldn't sweep me.  This worked to my favor even though I had a nice pile of dead guardsmen. 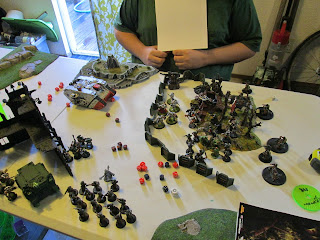 Now my turn was where I pushed him over the edge. Both squads regrouped and the Astropath paid off and both Marbo and my vendetta's came in.  Marbo deployed in the rhino wreckage in the terrain and the vendettas flanked on the left side.  I came in hovering, one: I wanted to disembark, two: he had no anti tank left with his land raider being unable to move, three: I was feeling gentlemenly as he had no skyfire.  Now I just overwhelmed him with weight of fire, marbo threw his demo and killed two termies, might have been five but three ones changed that idea, then the squad that had rallied fired two lascannons and killed his GK captain, and the other veteran squad first rank fire'd the last two Termies to death with a sniper rifle rending one.  The vendettas killed the interceptors and one of my master of ordnance's wiped his last GK squad with a loss of one guardsman with scatter.  Then my two veteran squads that had hopped out of the vendetta's blasted his tac squad with the surviving captain and marine being overwhelmed by the blob in a charge.  At that point we called it.  He had his termies in the far corner and his last 5 man tac hiding behind cover and the immobilized land raider.  He had killed 30+ guardsmen but I still had over 40 models on the board.  This is why I love playing infantry guard, there are so many models to kill that is really is hard to kill that many. 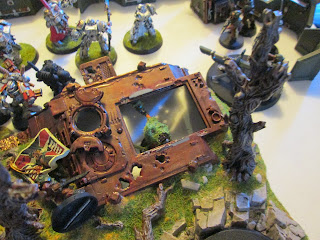 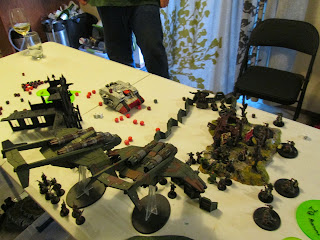 While this wasn't the fairest of fights since my brother didn't have the breadth of assets to choose from, I didn't build my army to fight him either.  I've been tweaking and playing this for a while and have had pretty good success with it.  The battle turned in the second turn decisively in my favor.  His termies scattering off and getting their mishap was huge.  I could have dealt with them, but my casualties would have been much higher and it would have been much closer fought.  The other was him firing his rapid fire weapons, forgetting he wanted to charge.  This left his Master out in the open to be pummeled and then buried in bodies.  The other issue he had was his psyker was in the back and unable to make use of his buffs as well, being out of range for most of them.  In the end I had First blood, slay the warlord and my primary objective, and he had none.  It was a good game for both of us as we had to look up rules we hadn't used in a while and I got a chance to test out tactics and face down some heavy hitting marines.  I always forget how hard his termies hit, but in the end they die to flashlights.