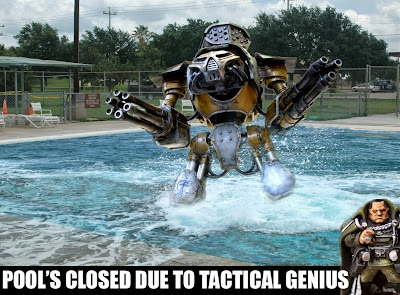 Time for another tactics discussion, and if the picture hasn't clued you in, there will be some tactical genius going on.  I want to talk about the main stay of the Imperial Guard HQ: the Company Command Squad.  Combined with infantry platoons, this is the backbone of the Imperial Guard army.  Now the command squad is a great unit with loads of options and with the orders it can issue, it makes the guard infantry more deadly and longer lasting than they would be on their own.  Now they aren't ideal for all army types though.  An armor heavy list will get more benefit from a lord commissar or primaris psyker, and this holds true to any list that doesn't have a lot of regular guard infantry.  However, since most guard armies have a significant portion of infantry, the command squad is the HQ to take as your primary hands down every time.

Now the Command Squad has two ways you can play and build it, depending on how you want your army to function.  You have what I term the Battle Staff and the Front-line Commander, the difference between the two is significant and is very important to the type of army you want to run.  The Battle Staff is the general that is back from the line directing the battle and the unit reflects this.  This build makes best use of its buffing abilities and brings up the effectiveness of the army as a whole, using Orders, Advisers, and weapons that support that.  What this unit lacks in is that it ends up not being very punchy, as in order to be effective the officer has to be in a good central location to make use of his orders and have line of sight.  Its not very mobile but doesn't need to be, this guys job is to direct the battle, not get in fist fights.  This build works in gun line armies where your troops are going to be relatively concentrated and static for a good part of the game.  The Front-line commander is the opposite, he works in leading from the front and buffing the squads around him.  The commander has a good mix of power weapons and the squads weapons reflect the assault role.  He works best putting out hotspots and going to where your army needs some punch the most.  NO it will never match the assault units of other armies, don't try to.  Where this unit shines is in an aggressive army where there are enough bodies to keep the enemy from focusing on him, but he can join the fight where it matters most and give those little guardsmen a fighting chance.

The Battle staff is my most used version.  I tend to play defensively early on and aggressive later in the game.  The battle staff works well in this role because it is built around supporting the units that do the most of the fighting: Infantry Squads and Heavy Weapons Squads.  Each of these benefit the most from the orders and  these are your most common units.  He can get these squads extra shots, twin linked, and back in the fight, and this is huge.  Guardsmen's leadership is nothing to write about, but every extra roll you get, the higher your chances of staying in the fight.  Now when it comes to advisers, if you have the points, take them all.  While the master of ordnance is iffy, the rest always work till they are dead.  And my MoO has been really accurate lately and has done some game changing damage.  Since he has to stay still to fire, bring weapons that have range and aren't hurt by staying still.  Sniper rifles are great, since the veterans have a good balistic skill, and you will be able to shoot at most of the time at the same unit as the MoO and increase the chances of pinning that unit, when applicable.  The key here is to not spend your points on the commander himself, this unit isn't going to win fights with its fists and don't try.  Maximize the output of damage it can do and how it can get the best synergy with your army.  The Regimental Standard is a must, your going to be close enough for it to be useful, and rerolls are not to be taken lightly.

When it comes to special characters, there really is only one choice for this and that is good ole creed.  I would argue if you are going this route he is a must and here is why.  He has a 24" order radius, can issue 4 orders including his own special order which gives furious charge and fearless, and can give scout to one of your units.  For his points this is hands down the best commander you can get.  The extra orders and foot radius is huge and allows for much greater tactical depth as your squads need not huddle around your commander.  Lets be clear he is not a fighter, he has a twin linked hot shot pistol (OOOOH!) and thats about it, he doesn't have an amazing profile, besides being Ld 10.  Keep him out of fights unless you like watching him die.  Now you have to build the squad around him, with his radius he doesn't need to move to issue orders, so heavy weapons teams and sniper rifles are a good option to give firepower and maximize their usage.  A master of ordnance works well here, creed can issue his last order on him to make him accurate if you are targeting and MC or vehicle.  Now since you spent the points on creed, you might as well get the advisers, for the extra points they really do add to your armies reliability of getting troops out of reserves and harder for your opponent.  The last thing is that his order is actually really good.  For the honor of Cadia can turn a charge from maybe to down right guaranteed.  Not many squads can handle 30+ charging guardsmen with +1 to S and are fearless.  With a couple power weapons, that blob can do a lot of damage on the charge, and the more you do on the first turn the better.  Once you get into the attrition game, few armies can beat the guard at this.  It is by no means over powered, but enough at the right moment to make that crucial difference.

The second style is a bit harder to build and play as guardsmen just don't have the armor or toughness to really stick around in a fist fight.  This is especially true of command squads as they lack the bodies to make up for this.  A good way to start of is carapace armor, it may not seem like much but will give you a 50/50 chance of , versus just dying.  For this squad, the medic is a requirement, having Feel no pain is huge esp since this squad is going to be in the fight a lot more than the other.  Now you need power weapons and bodies.  This is where body guards come in and if only for the extra body they give you.  Then a commissar or a priest, if you have the points take both, if you are worried about your commander getting pasted by the commissar, just take the priest with an evicerator.  The point is to get bodies and weapons that can make this unit effective.  You cannot rely on your commander alone to carry combat.  The veterans should have a heavy flamer and a melta gun or more if you have the bodies for it.  If you have enough points or don't want to the the commissar or priest, Kell is another option, he is decent for his points cost.  The key thing about him is that he has both a power sword and fist, giving some good flexibility as well as bringing a standard with it's buffs.  He's a bit pricey but allowing the squad to use your commander's leaders ship is not to be underestimated.  The reall art of this squad, is knowing when to stop spending points.  The priest is a good upgrade because he is not stuck with the command squad and can help out elsewhere if needed.  Now the key here is to not use this unit alone, it will not win unsupported.  It does not need to have other units charge with it, but having guard squads as meat shields and focusing their fire on the target you want your commander the to kill is critical to succeeding.  The goal is to overwhelm the enemy and give him no good choices, and you have to bring enough bodies to support this.

Now the Character that supports this the best is hands down Col Straken, he has hands down the best stat line of a guardsmen next to yarrick.  He has a 3+ save and is T4(not a small deal) and has essentially a power fist that swings at initiative.  And yes this does come in to play more often than you think.  Now that being said, he still is not a space marine, and can still be smashed by a MC.  He needs to be used judiciously and the squad needs to be built around him to support him.  The other thing is his buffing abilities with cold steel and courage, giving furious charge and counter attack to units withing 12".  This is big as it allows to play more aggressively and have a guard army that can do ok in assault, S4 means half your dice are wounding against MEQ, which is far better than a third.  Another option is Nork, he is a great meat shield and there is nothing really bad about him except for one thing, he is more expensive than straken.  He can be great but taking him is so expensive that you can have a squad that costs more than a termi squad but is not even close when it comes to capabilities.  You could take 20 more guardsmen for his cost, which is almost a no brainer.  He can be used, if you need a good meat shield that is going to last and be nearly impossible to insta kill.  The key to remember is that the company command squad doesn't fight alone and never should.

I will tie this in more later into general army tactics but that is your Command Squad and how you should use it.  Have a role for it to fill and build it accordingly, don't try and build an ok at everything but great at nothing squad.  Specialize and build your army around the tactics that support this.