Ok time for another batrep, my brother returned with his anti-guard army to try and beat me.  First thing is I have a 6x4 board now which made a big difference in our game.  No significant changes from the previous list for me, I swapped a heavy bolter for an auto cannon and added a plasma gun to my command squad, dropping the commanders power sword.  Now forgive me but I do not have his list exactly but here is what he had:

I see a bit of a pattern, and that is a fuckton of S6 AP4 ignores cover, and he didn't build to fight me at all.  Now one strike squad and the dreadnought were in the Storm raven in reserve.  I had the vendetta squadron and marbo in reserve, with the two squads in the vendettas.  Anyways Pictures! 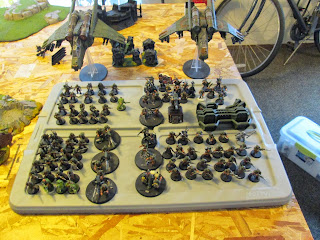 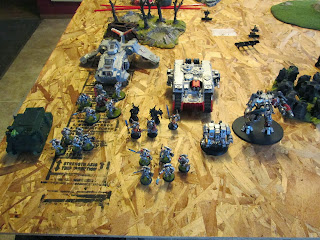 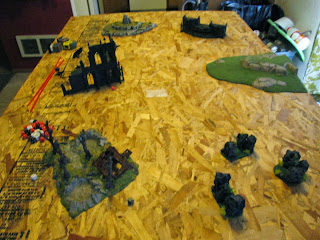 As you can see the board is a work in progress, but its 6x4 yeah!  decent terrain placement, I won the roll off and pick my side, the game was Purge the Alien, and corners, what ever deployment that is called.  I picked the corner with the rocks, and my brother got the opposite with the grey hill, though he was able to deploy behind the ruin, which I definitely regretted giving him that. We had the same warlord trait that gives you acute senses: Strategic Genius, so creed was both a tactical and strategic genius!  I won the roll off and he failed to seize.  He scouted with his masters special rule and moved his interceptors and rhino behind the big bunker. 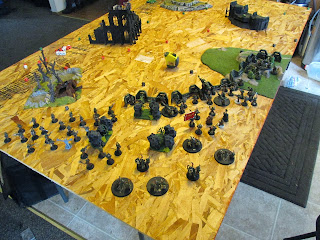 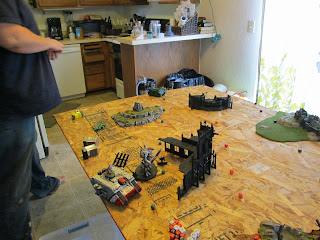 First Turn:  I moved my platoon back, give me some space from his land raider and soon to be teleporting dreadknight.  That ended my moving and I then attempted to kill his dreadknight with lascannons, however 5 consecutive ones will tend to put a damper on things.  In the end I was able to score one wound on the knight.  And I would like to say my autocannon was worthless, not a single thing was touched by it the entire game.  However my master of ordnance's were effective, causing the wound on the knight and also killed the rhino (First Blood!) and 4 of the 5 interceptors, with one grey knight in the rhino dieing in the explosion.  Of fraking course the incinerator interceptor survived.  He failed his morale and fell back though.

My brother then began his turn, his knight teleported right infront of my aegis, his land raider moved flat out on my left flank and popped smoke, and his lone interceptor used his 30" move to get on my right.  Luckily his fall back meant he was only close enough to kill two guardsmen with his incinerator.  Damn I hate those things, they hurt so much.  His Knight killed my command squad with the plasma guns and one of my master of ordnance's.  This hurt.  He didn't kill too much but what he did kill was pretty important and reduced a large amount of my fire power, with all my p guns gone and down to only one master of ordnance.  Who was my hero this game, and def earned his title.  More pictures! 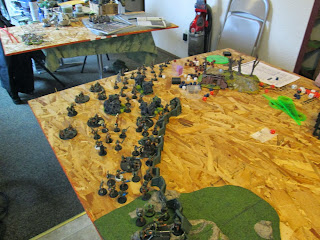 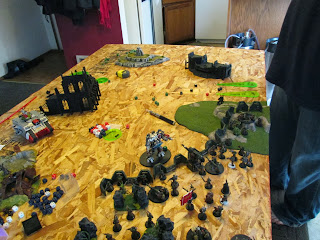 Note the one above is right before he flamed my command squad to death :(.

Turn 2:  My reserves both came in but I of course rolled the same roll twice for my outflank and my vendettas came in on the far right, this was not good.  Marbo came in but I decided to forget about him and left him out, blah.  Need to stop making dumb mistakes.  Luckily I had failed none of my morale checks last turn, so the line was holding and reinforcements were on their way, I moved the platoon around a bit but other than the vendettas, my army staid still.  In shooting I avenged my command squads death and killed the knight with concentrated firepower, though my rolling of ones continued and only one lascannon caused a wound.  Luckily I had enough lasguns and got a rending with a sniper rifle and he failed his armor saves.  Thank god that thing is way too mean.  My vendettas did a wonderful job rolling ones to pen and I got only one glance on his land raider, which he saved from his smoke.  Not good.  The last interceptor was gunned down at least.  Oh and mortars killed 2 grey knights hiding behind the bunker.  They decided to hide there the rest of the game, denying me a kill point.

His turn was very good, his termies disembarked and proceeded to kill 17 guardsmen with 3 incinerators.  I was not liking all these incinerators, they really hurt.  His land raider moved up and burned a number of guardsmen in the middle and, importantly, killed my regimental standard, rerolls gone :(.  Then his termies assaulted and wiped the remainder of my blob platoon.  So a lot of my guardsmen were disappearing fast and I needed to do something, forgetting marbo really hurt. But the game was not over.  Oh and my borther whiffed his reserve rolls even with his master's "tactical genius", but we know there is only one of those.  More pics! 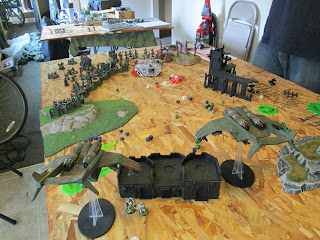 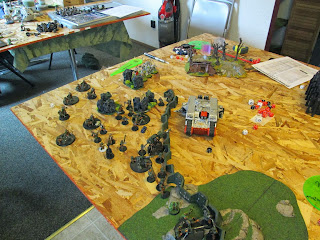 So turn 3:  I remembered marbo this time and moved my platoon command squad up to try and hold the termies for a turn.  They got scared and didn't feel like charging but thats in my assault phase.  So I move marbo in this time and got into position for his pie plate.  Vendettas moved up another 18, I really wish I had gone for the full move to get the guardsmen into the fight earlier.  My squads shifted, trying to get some more space and reduce dying from flame weapons.  I killed three paladins with marbo's demo charge.  Then continued my bad rolling and only knocked one hull point off the land raider whoopie! My mortars did ok, one whiffed completely, the other was able to kill another paladin with some bad armor saves, so he was down to one paladin and his master.  My auto cannon and sniper rifles continued to suck at life and did nothing.    Oh and my platoon command squad failed the 4 inches needed to charge by rolling a 3 yes!  I know they probably would have died, but I can hope can't I?

He then moved his land raider and his paladins, his storm raven joined the fight and I was not feeling too good.  Paladin's wiped out platoon command squad and marbo, his raider burned more guardsmen, the left squad failing morale but only running four inches.  Luckily the other held firm.  His paladins thankfully could not assault and were left in the open!  Now the game was pretty intense and picture taking fell off till the last turn so I apologize.

Turn 4:
I moved my vendettas into hover and dropped my squads.  My squad regrouped and reformed to face down the land raider.  My luck continued but eventually after rolling enough dice my two melta guns in my newly arrived squad finished off the land raider and my vendetta's killed the paladins and his master (Warlord!).  I finished off my trying to shoot his raven but missed.  Things were better now but he still had more guys about to pop out, hopefully they would not be enough.

He moved his raven into hover as well and dropped his GK squad and dreadnought.  They each moved towards one of the veteran squads.  His dreadnought wiped one with 11 wounds, god those incinerators hurt, they can just kill so much.  His regular squad moved up and killed 4 guardsmen in the other and then assaulted, but I killed the incinerator with overwatch, thats something at least.  They of course wiped the rest and my two new squads were off as soon as they had done something. 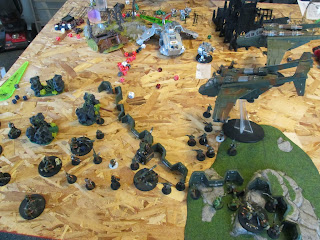 (in the middle of his movement)

Turn 5:
I moved my vendettas back and then proceeded to try and kill his remaining guys.  With combined firepower from my remaining squads I killed all but the last grey knight and my master of ordnance was lucky and both killed the dreadnought and knocked a hull point off the storm raven.  Vendettas opened up but only succeeding in knocking a hull point off, which he saved with jink.  That was my turn.  not bad but I really needed to kill that last guy.

He proceeded to try and hunt my vendettas with his raven, immobilizing one.  I will say I love that an immobilized result doesn't kill the vehicle if it is in a squadron, so much better.  His GK did nothing, I passed cover, and he charged taking a lascannon to the face in overwatch and dieing!  We rolled and the game ended. 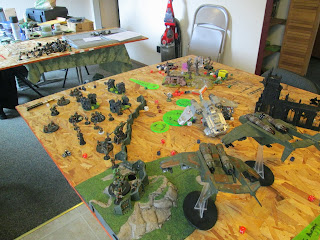 Well this was a much closer fought game than last time and as frustrating as all those ones were, it could have gone both ways.  I got first blood and warlord, and got 8 VPs from his army: Master, Paladins, Rhino, GK squad, Interceptors, dreadnought, land raider, dreadknight, for a total of 10 VPs.  Now did he kill enough guardsmen, cause he certainly killed a lot... and no he didn't: Command squad, platoon command, Blob squad, two veterans, and marbo for 6 VPs, no secondary objectives.  Wow I did not think I would win this, he really kicked it out of my guardsmen, but pulled it through at the end.  That lascannon to the face probably won me the game, if he had not been hit he would have certainly wiped the squad, giving him another vp and linebreaker, plus I would have lost that vp for that squad.  I have to say the MVP is the master of ordnance, he was one fire and caused wounds and hull points left and right.  He hands down caused the most damage in points and that killing the interceptors and rhino right off the bat probably won me the game.  I know most don't take him because he misses but I have to say he has only missed a few times, and if your opponent isn't careful, use bring it down on him against a vehicle that has infantry next to it to get a good double kill chance.  I am def dropping the auto cannon and snipers, I want them to work but they consistently fail me, I just can't take enough and I refuse to take hobbits.  Ok a long and brutal game is done.  I hope you enjoy.

Posted by Grumpy Guardsman at 6:01 PM