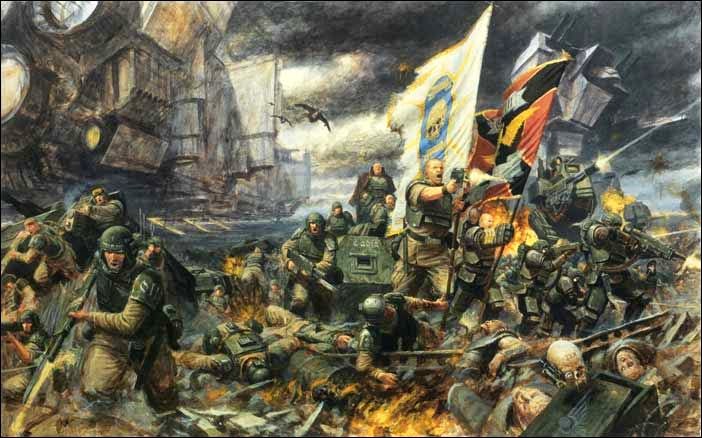 The reason I have been bringing up some of the forge world units is that they are mobile, fast vehicles.  Currently the IG is pretty static, it has some mobile elements, but building a fast and mobile army as a whole is a struggle with our current codex.  We do not have a lot of outflankers, scouts, or infiltrators.  And some of what we have are not very mobile nor contribute a whole lot to a fast army.  Ratlings for example are infiltrators, but don't fit well in a rapidly moving army, not at least in the best way.  Scout sentinels can outflank with scout, but on their own are pretty slow moving and can't react to events across the board rapidly on their own.  But I think you can build a mobile IG army that does well without relying on allies to do this.

Internally to the codex without FW you have some units that are good and fast.  The hellhound variants are very solid vehicles that can move quickly, shoot well, and have decent survivability.  Valkyries and vendettas are flyers with hover and as such are able to move about very quickly and react to threats.  But they are limited because of reserves so on their own won't be able to bring mobility as a whole to an IG army unless you go all out with 6+ of them with most of your infantry inside.  Scout sentinels are ok because of their outflank ability, but are slow and weak, so not amazing here but a unit can help.

Scions are another tool to mobility.  They can all deep strike and their transports, Taurox primes are fast and bring decent firepower.  While scions can be subject to reserve luck, if deep striking them you don not have to worry about them going down with a valkyrie if get taken out.  Scions are very useful in that they can pop in any where or ride in their transports.

While rough riders are a pretty mobile unit, they are very weak and have a limited role.  Not bad units, just not great either.  This is where forge world comes in to help.  The salamander is one that I think is a very helpful tool here, with scout and being fast with decent firepower and for its price, you can bring a decent number of them without costing too much and still having room for more forces.  The Tauros are ok, they are bit expensive for what they bring, especially when compared to the salamander, but the base heavy flamer ones are still relatively cheap and can outflank for a nimble back field unit that can threaten infantry and light vehicles.

In order to build a rapid moving Guard force, your going to have to rely on mech, IG simply can't move ground pounders fast enough, and realistically very few armies can.  I would not get too invested with infantry, just enough to secure a few objectives with ObSec.  Here is a quick list I did up trying to achieve the goal of a fast imperial guard army.

this gets you to just over 1500pts, with plenty of room for add ons or going more into another section.  I might consider the salamander command tank, as its an elite choice and with its auspex it would be useful dropping cover saves, in this army you could fit two to give you some more mobile units with decent firepower and a decent ability.

You can flesh out the scions more, add more troops, add another vendetta, artillery etc.  This forms a mobile core, with transports for scions, vets, and multiple fast vehicles, some with scout.  It gives options, and can deal with knights if it has too and has about 18 S7 shots a turn with a good amount of melta for dealing with heavy armor.  Its mobile enough to get away from assaulting units for the most part.  It will take up space so will require smart placement and paying attention to where you want to be a few turns ahead.

I prefer vets here as there are less entry costs than a platoon, as with two minimum troops to fill with 4 infantry squads and 2 PCS if you went with platoons, that adds up with a mech force.  Keeping the vets minimal on upgrades will help.  Chimeras can be swapped for their transports, but I like the taurox's reliability moving through terrain.

As a first stab its not an amazing list by any means, but can deal with many different threats and at its core is capable of getting across the field pretty quickly.  Hope this gives you ideas.