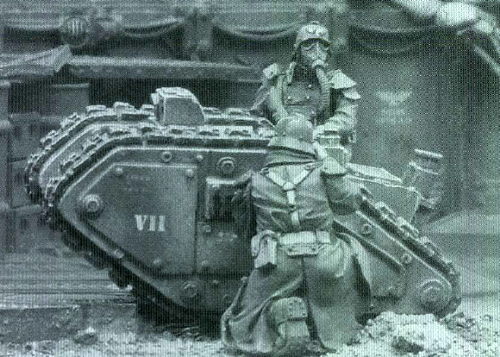 After reading the Cyclops rules more and thinking and mulling it over, I have realized what an unnoticed gem this unit can be. First off, its dirt cheap, yes it takes up a heavy support slot but its damn cheap for what you can do with it.  They great thing too is that it can help against invisible units as it does not have a shooting attack.  Its an extremely flexible unit and has quite a bit going for it.  Its not perfect mind you and is not easy to use, which is prob why you don't see it often.

So what is the Cyclops.  Its a Forge World unit and its a team of a guardsman and an cyclops demolition vehicle.  Don't let the title fool you though, its not actually a vehicle.  By the rules it counts as infantry and is T 6 with 2 Ws and a 4+ save.  Durable but not amazingly so, you can't just stick it in the open and move it up the field and expect it to work.  The squad is a heavy support choice and consists of 1-3 teams.  Each team is 30pts, so for 90pts you get a full squad with 3 roving bombs.

The cyclops itself is Fearless and extremely bulky (5 models).  It has the remote control special rule, which means that the unit is deployed together at the start of the game whether in reserve or on the board, so you can't split the squad.  Once on the board though, each cyclops moves and is targeted independently.  The guardsmen remain attached together as a unit, so a unit of three teams would essentially consist of three cyclops and one unit of three guardsmen.  The cyclops remain in function as long as they are within 48" of the guardsmen controllers and at least one of them is alive.  So they are not like artillery where if the crew is removed for one gun the gun goes away.  If one guardsman is alive and all three cyclops are as well, you still can control all three.  If all the operators are killed, the cyclops remain on the board, but the unit does count as being destroyed.  The reason they stay on the board is that if a cyclops is destroyed by any means, you roll a D6 and on a 6 it explodes.

Its weapon profile is essentially an earthshaker cannon with S9 AP3 Ordnance, large blast.  Now how do you detonate it?  This is where it gets good.  In the assault phase it can be detonated.  If it is in combat, it can be detonated in yours or your opponents.  If it is not locked in combat, it can only be detonated in your assault phase, its important to note that it does not have to be in combat to explode.  It can charge and it explodes at initiative step 10.  Which is awesome as if something like bikes charge you, you still go simultaneously with hammer of wrath attacks.  So its blowing up.  To be clear its not a shooting attack.  It is simply destroyed and you place the large blast marker over the cyclops.  It not being a shooting or cc attack really is the awesome part here.  It just simply explodes when you want it to.

This is great as it offers an answer against invisible units.  They can only be targeted by snap shots, but since the cyclops is not a shot, and technically not even an attack, it gets around this.  It doesn't declare targets, it just explodes.  Now the cyclops is not very mobile as its an infantry model, but most units that are getting invis on them, are fast units that want to get into assault, you can count on them coming towards you and take this into your plan.  You don't want them too far in front, as then they will be an easy and obvious target, but place them near the front of your lines and wait for those assault units to come, since they don't have to remain in coherency, you can place them in the most likely avenues of approach and then move them out when the those invis khorne dogs come your way.  There is also no restriction on running with them, and then exploding them in the assault phase, so if you don't want to risk overwatch, you can run them to get them closer and then explode.  Since its not an attack, the invis unit will still be hit by it, as they are not being targeted.  Think of it the same as if a vehicle explodes near an invis unit, they are still hit by it, the cyclops essentially works this way, just that you control when it goes up.

Now these are not just a way to counter invisibility.  They are an extremely flexible bomb, as a 48" range is actually pretty large considering that these guys are only moving 6" and running each turn.  This is great as it makes hiding the controllers really easy, and since they all have to die before the cyclops stop functioning, you have good chances of getting uses out of them.  Now they are not amazingly tough, T6 is great, but there is enough autocannons and equivalents out there to tear these apart if you aren't careful, so don't go cowboy with them.  Best way is to place them out of line of sight in a ruin or good piece of terrain on a flank that you want protected.  They are an easy and cheap flank protection unit that can counter a lot of attacks heading your way.  Now they can't one shot most vehicles because of AP 3 sadly, but if a swarm is heading your way feel free to blow them up.  Since its not a shooting attack, your opponent cannot make a jink save.  This is another wonderful little thing about the cyclops.

They make good disruption units, as they simply cannot be ignored, as long as you don't place them where they cannot be of any use.  If facing a deepstriking heavy army like drop pod marines, scatter them in your deployment zone and when they drop in, you'll have some wonderful surprises for those marines.  Since each cyclops is separate, they will have to have three units target each one in order to neutralize them.  Can you think of another unit that for 90pts can neutralize three units shooting that effectively by simply being there?  I can't, at least not for the guard.  If the drop pod troops waste the cyclops, oh well, the rest of your army was spared and can now lay waste to them.  If they ignored them, well now they have some lovely AP3 large blasts heading  their way.

Mobility is really there biggest issue.  They are small, about 2/3, 3/4 the height of a guardsman, so really not hard to hide.  But they move at the pace of an infantryman, so not moving quickly.  You can use them as ambush weapons, and this is def  a role they do well in.   If you want to be more aggressive with them, your going to need some help.  If you can get the infiltrate warlord trait, or the IG one that allows them to outflank (though not as good as infiltrate) you can position them forward to push on the enemy.  They can be transported, but being extremely bulky means that you can only fit two in a chimera or taurox.  They can also fit in a valkyrie.  I like the valkyrie option as you can use grav chute insertion to drop them and turn your valk into a bomber.  With 2 Ws they aren't going to die even if they take a dangerous terrain test, so drop them out and then run them close enough to explode.  Stick them in a chimera or taurox and rush them up the field, th transport will keep them alive then you can disembark and blow up, if you kill your transport, oh well it did its job.  Hell there is nothing stopping you from throwing them in a drop pod, though currently only space wolves have a non DT drop pod.

Overall these are a unit that has a lot of potential to do quite a bit and is really a toolbox unit.  It has a lot of utility and can react well to many different situations and opponents.  It isn't exactly easy to use, its slow and not terribly hard to kill.  Its easy to hide though and doesn't need to really do much, by existing it changes your opponents plans and gets to him react to you and lose the initiative.  Its a great denial unit against deepstrikers, and can help deter an attack on a weak flank.  It can hit invis units and no jink saves can be taken against it.  Its cheap, and flexible.  Really the only downside is that it takes a heavy slot, but if you are taking multiple CADs then this isn't an issue, and really I think it deserves some consideration even if you are only taking one CAD.

Anywho I hope this gives you some ideas to consider, as its really not a bad unit.