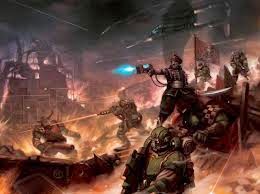 I got an answer back from Forge World regarding some of my Militarum Tempestus questions!  This should help Tempestus out a lot without techincally resorting to allies.  The main questions I asked were about flyers, and they answered as well as cover the rest of the Imperial Armor range.  Read below


Here is the response to my questions from FW:

With regard to the new version of the 40k rules and any new Codexes that affect our publications, we are currently working on several errata and FAQ updates to address any issues where necessary. We don’t have any specific time frame for when they will be made available but it will be in the near future.


In the meantime you can consider the Militarum Tempestus to be the same as the Astra Militarum/Imperial guard in terms of what Imperial Armour equipment and vehicles they have access to.
The Aeronautica book is currently the most up to date book for the Navy Flyers.
So what can we get from this? FW is working FAQs and errata to update the Imperial Guard Imperial Armor options, but its prob going to be a while till this is done.  Near future is pretty vague.
The big thing is that as far as FW is concerned, Militarum Tempestus and Astra Militarum is the same.  So whatever units that can be taken for 40k for IG, can be taken for MT.  This makes me happy.
So if you are looking for some additional support for the MT, you now have a few more options, especially with an open heavy support section and elites.  Personally the Vulture and Avenger will prob end up making a showing in my MT lists.  Maybe even a Tauros or two if I can convert a couple.
Techincally you can take armor and artillery, but most of these are a bit outdated till an errata update comes out, and if you want tanks IG allies will serve you better.  But the field is open now if you want to take them.
GG
Posted by Grumpy Guardsman at 10:36 AM