End Times: My Jealousy and Hope 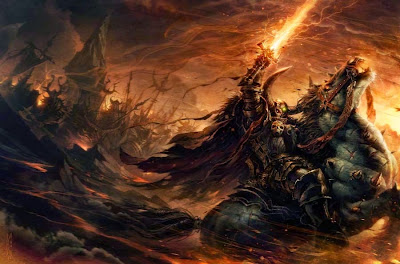 Well I think most people are aware of the huge shakeup going on in Fantasy, and I am jealous.  Despite differing opinions, no one can argue that the fluff and background is being moved forward in way not seen in ages.  Compared to 40k, Fantasy is moving at a lighting pace.  40k is stuck, the clock of doom about to tick but never moving.  I so want 40k to move forward, even if it just moves back to the eternal stalemate.

What I mean by that is that it would be great to get some new major stories and plot moving.  Lets see the 13th black crusade move forward and be completed, even if at the end chaos is repulsed.  It allows the story to unfold more, and importantly lets characters die so new ones can rise.  I know some would not be happy, but what if Abbadon died?  Calgar? Dante?  Creed?  What if Eldar were brought closer to the brink?  What if a Primarch rose?  What if the Imperium was fractured?

The point is, 40k is not stuck in this all or nothing stance, where if the fluff moves forward, something so catastrophic happens that ends the universe.  They can certainly go that route, Abbadon can succeed completely, cast down the emperor and the Imperium and drown reality in Chaos.  Or perhaps in great sacrifice he is deafeated, the imperuim fractured but chaos as well, driven into a new civil war for dominance.

What if Gazhkull is killed?  What really bothers me by some fiction and in many ways this applies to 40k, is that characters become unkillable.  They are no longer real characters, just immovable objects and forces, more elements than people.  Oh here comes calgar in this epic duel against a scary monster.  Oh wait its calgar, so he is going to win somehow.  Woo hoo exciting.  What if  he didn't?  Fantasy has done a great job of showing the characters can die, allowing new heroes and stories to unfold.

40k right now is defined by immovable objects and unstoppable forces, in the guise of characters.  But the really aren't.  They were at one point, with stories and histories, exploits and failures.  But now they really are nothing more than an element.  None can really win, but cannot lose either, as that would force change, the stalemate would move.

Do your characters really feel that alive?  We'd like to think that, but if abbadon is killed in a battle, wait he really wasn't killed, he was teleported/warp rift etc. out in time and is still alive.  Am I the only one that feels a little cheated by this?

My real hope is that what is happening to Fantasy will eventually happen to 40k.  Some will rail against it, but I would welcome it.  Seeing some iconic characters fall, seeing who would rise to claim their mantle's.  It would be exciting for 40k as it hasn't been in nearly a decade or more.  And I do hope and believe that this will happen, to some extent.  Simply because it seems to be working financially for Fantasy.  Depending how much so, this experiment may come to fruition in 40k.

What do you think?  How much change do you want to see?  Obviously too much and 40k ends (literally).  But am I the only one tired of the frozen clock and characters?