Do You Suffer From ED? 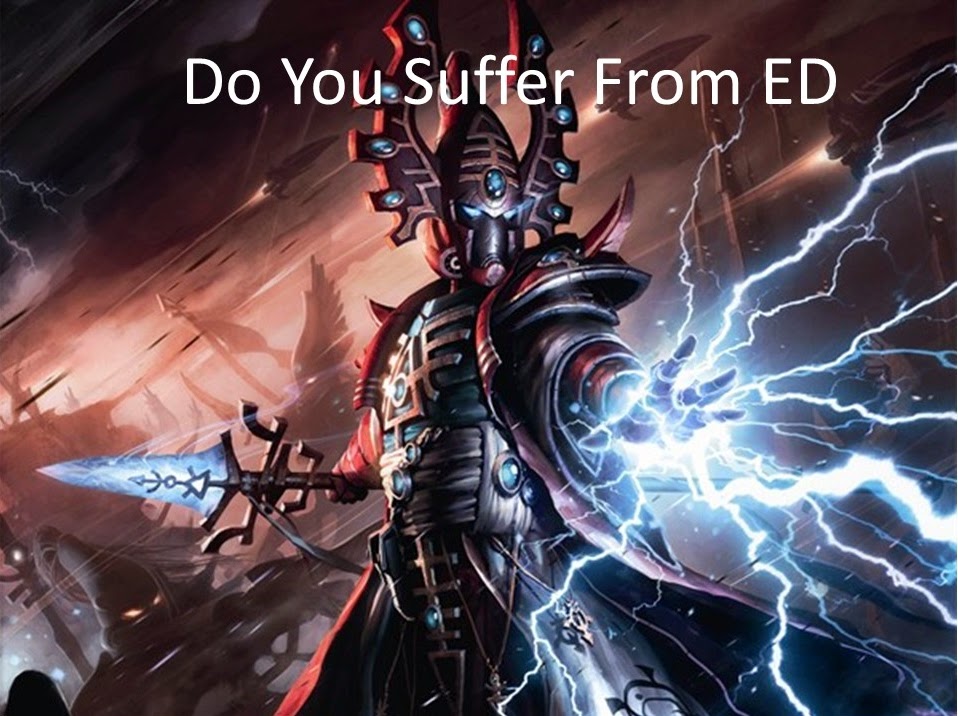 Well the big boys have gotten bigger, and we are all about to suffer from ED, the Eldar Destroyer.  Rumors are pretty much 100% confirmed at this point, if you haven't heard, well go check them out.  The sad thing is, everything else but two things look great for eldar players.  If it hadn't been for two changes, this could have been an amazing release that would have rebalanced the codex and game, but alas, tis not to be and we shall suffer from ED.

What am I talking about?  Well eldar distortion weapons are now destroyer, with some rumored nerfs for the wraithguard versions.  Wraithknights are now gargantuan creatures, and really if there weapons were not D, it wouldn't be horrible, at just shy of 300pts, they would still be great, but its the D that makes them pretty crazy.  But this actually is not the worst thing.

The worst is really the jetbikes.  They are dirt cheap and still amazing, but to add to it, for a little bit of points, ten, they can get a scatter laser or shuriken cannon.  All of them.  No restrictions.  So I am looking forward to 4-5 man units zipping everywhere with more firepower than tanks, it'll be great.  So what there is a wraithknight with the D, waste your shots at it while it laughs at you while its making you hit yourself.  The bikes will be slicing and dicing you while you try and kill the knight, and the MSU squads won't be hard to kill per say, but there will be enough and their damage output will more than make up for losses.

Ok, a little negative.  Really though, the rest of the book looks to be quite balanced and has made a lot of the aspects playable but not crazy good, banshees finally can charge into cover for one.  Nearly every aspect has gotten the needed boost to take it off the shelves, without breaking anything.  But then you have bikes, and wraith, so yeah.  I hope that people will take advantage of a lot of the other good in the dex, but many won't.

How to deal is going to be the big question, and really the hard part is waiting and seeing what armies start to form out of this.  Smart eldar players really only need one knight and some bikes as a base and then build from there.  My gut tells me to ignore the knight, just take that D, and kill the bikes at all cost and then kill everything else.  Tarpitting will be much harder with the knight as it has stomp, but a large enough blob can buy you a turn, maybe two if your lucky.

Tie it up and kill as much else as you can.  Hopefully spam won't rise to the top and players will take advantage of the fact that they actually have a lot of good units.  And lastly, relax, world isn't over.  Vent for a minute and move on.  Hopefully a blue pill will come along to help us all that now suffer from ED.