Skitarii: No Transport, No Problem 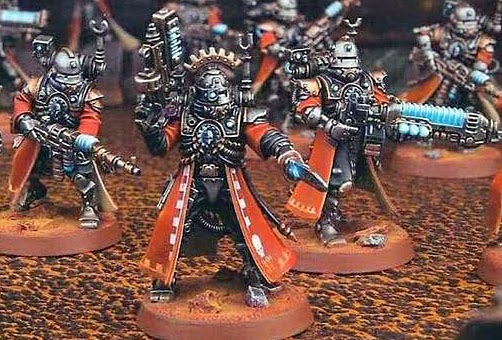 At this point we have pretty much most of the info on what skitarii have as far as an army.  The dunecrawler is looking to be the last model for the army, with no HQ choice, nor transport.  To be honest, neither is really a big deal.  The Alphas have two wounds and you can kit them out to be as good if not better than an AM company commander, so really, nothing that bothers me.  The transport option though seems like a bigger deal on first glance.

But really isn't when you start to look at the army.  The elites, infiltrators and ruststalkers, both have dunestrider, which grants them +3" of movement for movement, running, and charges, plus the infiltrators have surprise infiltrate.  So they can move 9" in open terrain, have a reliable run move, and a more reliable charge.  The same goes for the two legged walkers, though only the CC one really needs the movement boost.

As for the troops, only the vanguard are really missing having a transport.  The Rangers have a 30" range, so really, they don't worry too much about moving around.  The rangers support your back field and shoot ranged targets so they really don't need one.  The vanguard, well they want to get a bit closer.  This seems like a big hit, but its important to remember they are a shooting unit, not a cc one, so they still have a 24" threat range on turn one with their movement, and really 30" once you take the detachment rules into account.

So the detachment.  Its pretty simple as far as organization go.  Two min troops and thats all, then you get to take everything else. 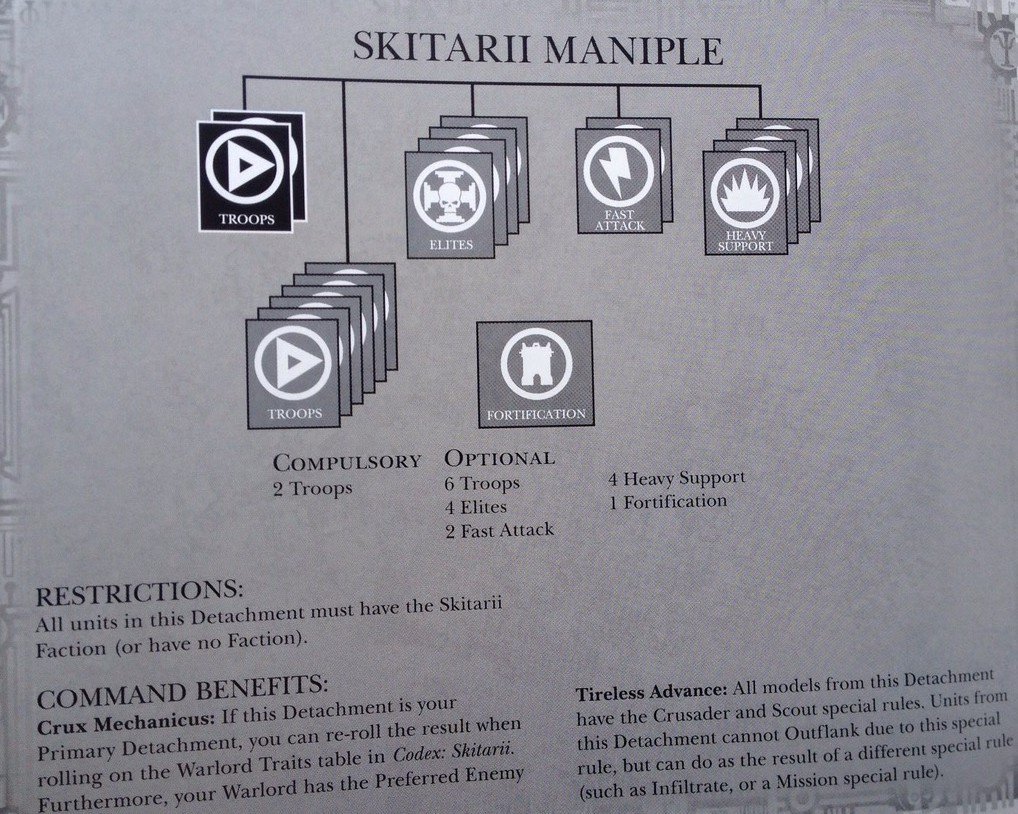 The maniple has the very nice rules of granting crusader and scout to all units in it, though unless they naturally possess scout or infiltrate, it does not grant them outflank.  So for vanguard, this gives the a potential of 12" of movement turn one, which goes a long way to getting them into position in mid field to do their work.

With a total of 8 troops, 4 elites, 4 heavy support and 2 fast attack, you can bring quite a bit into your army.  Since the dragoon is the only fast attack, 2 FA slots really isn't a big deal, as you can still bring 12 of them.  Really this army lets you min max with troops if you want to, bringing min squads with special weapons.  I probably wouldn't as you get thin on troops and these aren't space marines, so those 5 man squads just won't hold up too much.  Rangers are the best bet for min squads, but vanguard will do better at full size, plus being able to take 3 special weapons at that point.

The dunecrawler is looking good too, only 90pts at base, which is still solid and with some strong upgrade options with weapons.  I'm going to hold off on the last few units in reviewing them till I get a copy of the codex.  But they can be used as a very good AA option, or anti tank, or anti infantry.

They really have just about the whole package for an internally balanced army.  They have solid troops, each with different strengths, good cc units, again both have strengths and are fast enough to make a difference.  The vehicles are multi functional and pretty cheap.

They can do long range, they can do short range, they can shoot air, they can claw things up.  All in all, they are a solid, very good army on their own.  They don't fit into death star 40k, thank god as far as I'm concerned.  The doctrina's look to be good, with modifying BS and WS and appearing to be ld based tests like orders.

Ignores cover is a big thing right now, and while they don't have it straight out, they do have phosphor weapons and omnispex's so they aren't SOL here either.  Overall they seem to have great options and I am looking forward to having them as my third main army.