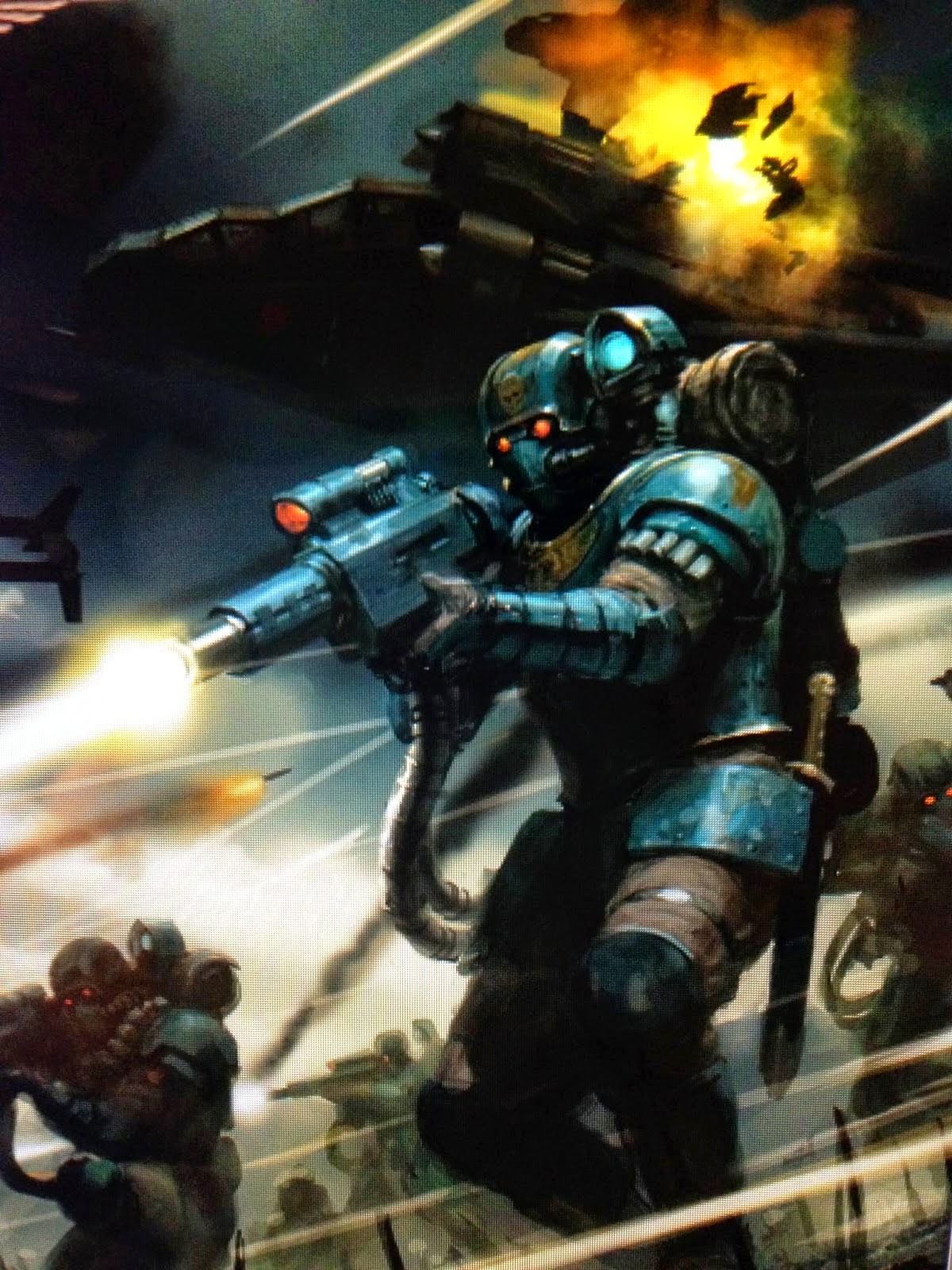 Switching gears back to scions.  Trust me though, this is related to skitarii.  For me, I am going to be combining skitarii and scions to form my army.  One thing is that this keeps it cheap, as I don't need a full on skitarii army, just enough to work with the scions.  This is also though a good starting point for a scion army base for you build off of.  Limiting to 1000pts as this still leaves enough room to use this as a second detachment, or allies.

Core here will be two command squads, simply for orders and special weapons.  For this, one squad is all melta and one all hot shot volley guns.  This gives you anti tank and anti infantry.  You can do plasma as well, but I recommend going with volley first and after you got your core built, then decide if the plasma command squad is worth it.

For troops, three scion squads, this gives you a good base of fire and troops to run around snatching objectives.  Here, two squads take plasma, and one goes melta.  The plasma squads I would go full ten man squads, where as the melta squad can stay at 5 man size.  The five man squad can deep strike with the melta command squad or catch a ride.  At this point, you have about 330 pts left, the rest are going into tauroxes and additional gear.

With remaining pts, you get 4 tauroxes, which I would go with 3 standards with battle cannon and twin linked autocannon and 1 with gatling and hot shot volley.  This gives you a good anti infantry vehicle and the rest are all rounders.  This leaves you ten pts left, which you can spend to upgrade a vehicle or two with storm bolters or heavy stubbers, I would give the gatling taurox the stubber.

Its important to note that tauroxes are FA choices, and I would make max use of them here, that way you have no issues when deciding which unit wants a ride and which one is going to be hoofing it.

Here is a basic 1000pt list that will serve well at that level on its own and acts as a base for higher pt levels and can tie in with other armies.  Its mobile and only one unit is without a transport.  Not a big deal as the 5 man melta squad can deep strike and probably should be doing this most times.  The taurox as DT is just how I would do it, so feel free to switch it around if you know your going to be deep striking the command melta squad more often.

Overall this will tie in very well with IG and Skitarii, both can provide AA and long range anti tank, which scions hurt for.  Personally I see the Skitarii filling the scions weaknesses better than IG, as other than artillery, skitarii have better options for pts to do the job.  Skitarii have units that can also keep up to put the pressure on with scions.

Hope this helps.  I was requested to do a post on this so hopefully I met the intent.