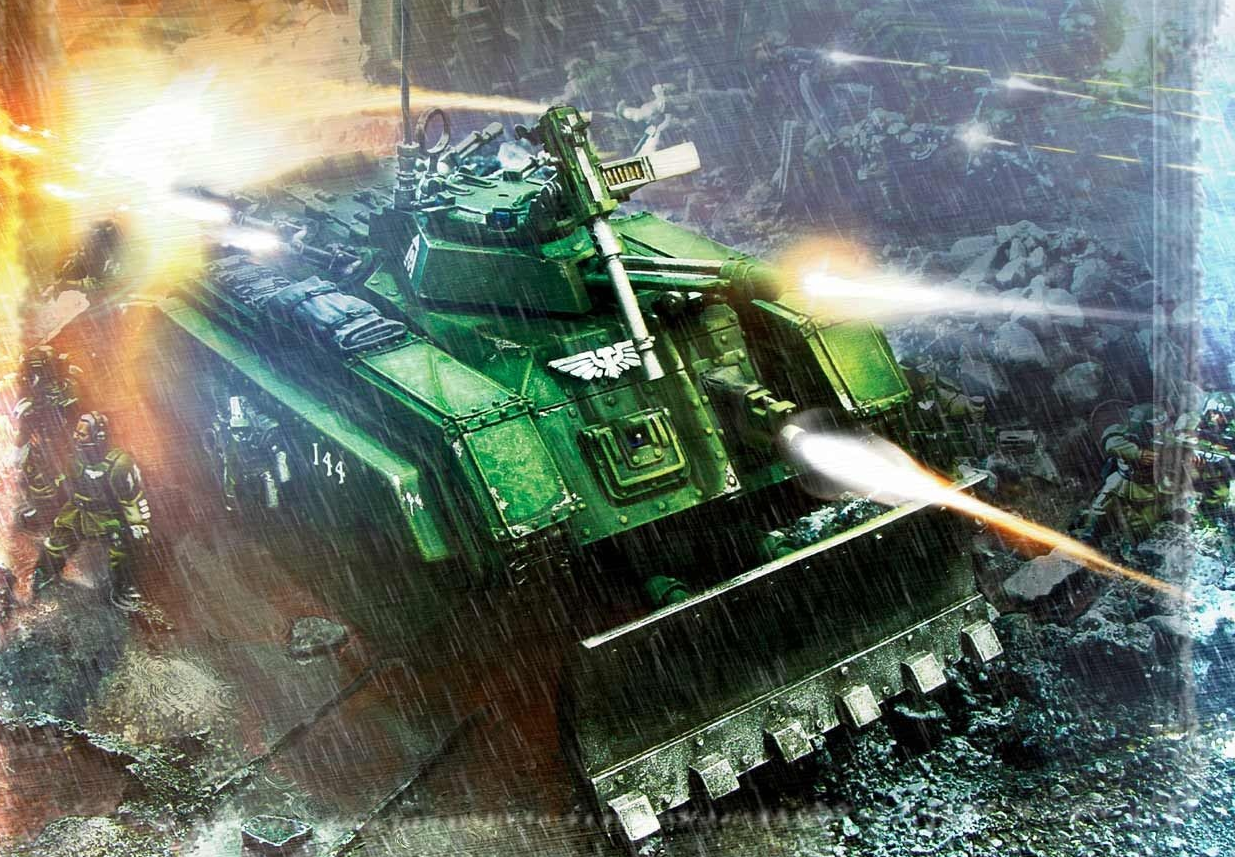 Back to some tactics.  There have been some more Knight rumors and IG rumors, check them out here and here.  I will wait a little as I have already put my thoughts in and want to see what comes out the next few days.  I will say I am happy, I actually made it onto BoLS, they referenced me in an article, so I am feeling a little happy about that, not really expecting it.  Guess I am going more mainstream, who knows trolls may start appearing.  So today, before I head off to valentines stuff, I am going to do a quick run through on the Chimera.  I talked about them in relation to infantry squads earlier so check out the tactica on the right.   This will be focused on the Chimera itself and less on the troops they carry.

So the Chimera, the humble transport of the imperial guard.  In terms of dedicated transports, its middle of the road.  Its not the cheapest, its not the toughest, its not the fastest, its not the most shooty.  Its just a nice, decently armored, decently shooty, transport.   It cost 5 more points than an infantry squad, thats 20 more than a rhino.  For that you have a BS3 3HP AV12 10 10 vehicle with a multi laser, heavy bolter, searchlight, and smoke launchers.  It is amphibious which is pretty self explanatory, it can float.  It also is a mobile command vehicle meaning a command squad inside can issue orders and measures from the base of the hull.  The other big thing is that it can have 5 models fire from the top hatch.  This is what made the ole melta vets so deadly in 5th.

The Chimera can replace its ML with a heavy bolter or heavy flamer for free and can exchange its hull heavy bolter for heavy flamer for free as well.  It can take a pintle storm bolter or H Stubber, HK missile, dozer blade, extra armor and camo netting.  Of these, the dozer is going to generally be the most useful as when you do fail that dangerous terrain test, that re-roll matters a lot.  Granted you are paying for that one time, but it can be the time that makes the difference.  Camo netting can work well, but only if you are building your army to hide behind cover most of the game before moving out to grab objectives.  Its not bad but gets expensive fast and against some armies it will get little use.  HK missiles can work, but only in mass quantity.  But here is the thing, you only have 50/50 chance of even hitting.  So you have to spend 20pts to get a single hit, so of those HKs, half are wasted right off the bat.  I would stay away, HKs work in squadrons that you can prescience to give you TL.  But on individual chimeras it doesn't quite fit.

Now for the main weapons.  This really depends on what you are looking to have your chimera do.  I like the standard load out, the ML S6 means you can threaten MCs, Medium to light vehicles and the HB gives you AP4 to hurt the filthy xenos.  I do also like symmetry, so two HBs are a good choice, its certainly more focused.  This lessens what you can hurt but does mean you are going to do more damage to medium infantry with 6 S5 AP4 shots.  You are less capable of hurting vehicles but the damage to you do to infantry is more likely to kill them.  So if you are looking for anti-infantry grab two HBs and sit back and blast away.  You will be surprised how much three chimeras can take out.  Now if you are going to be running up at your opponent or getting close, the heavy flamers are a great choice.  Its a way to get a cheap mans hellhound.  Two heavy flamers are not bad at all. Don't forget that one is on a turret so use maneuver wisely to maximize the hull HF and then turn the turret to get another part of the unit.  This will work best against large units and in combination with tank shock.

So when it comes to weapons, really think about how you are going to be using your Chimeras and what role the infantry they are carrying are going to be doing.  If you are getting close, a HF is a good choice.  If not the standard load out or double HBs is a good choice.  Now if you are going full mech, then it is a good idea to have so different load outs so you can deal with different threats.  Chimeras are effective tanks but you really have to watch your movement as your side armor is 10 so it can be really easy to get a kill shot one them.  A couple of the heavy flamer ones can keep your flanks secure.

It is always key to make sure that the chimera supplements/supports the squad it is carrying.  It really isn't helpful to have close range weapons when the squad inside has a lot of long rand shooting.  It also is not effective to have long range shooting on the chimera with close range weapons on the squad.  There are exceptions so don't think this is a set in stone rule, more of a rule of thumb you should follow, and if you are departing from it, know your reason why.

Now Leman russes cannot keep up with chimeras so you lose some of their former protection in using russes to protect side armor.  You can do this if you are keeping them back, but as soon as you move out, you will be exposed.  Hellhounds are a chimera's best friend.  Throwing them on the flanks gives your side some good protection and you have a dedicated fire support unit that can keep up and keep shooting.  When taking them, think of how they can supplement the squads and chimera's themselves, try and make up for a weakness the squads and chimera's have. If you are lacking anti tank then the devil dog is a good choice.

Chimera's do need to be protected early on and use terrain to protect flanks and block LoS and give cover.  First few turns you use them to weather the incoming fire till you have weakened your opponent enough to move out and take the objectives.  Now when you get to objectives you are often going to have to fight over it.  Once your guys are out, tank shock.  Disembark first, then use your chimeras as a sweeper and push your opponent off the objectives.  They are going to have to deal with them and its going to buy your squad another turn of freedom.  If you are lucky you can do some damage and force them to break, worst case you lose an expendable chimera.  Always remember that they are expendable in the end.

Now speaking of tank shock, this is an underutilized tactic and is something to really use to your advantage against tough to kill units.  This works best against smaller units that are really tough to kill.  What you do is use terrain and units to block a unit in.  Use other vehicles and troops to give the enemy unit nowhere to go, as long as they don't have 1" from any of your models, they cannon pass.  Once they are hemmed in, tank shock with your chimera.  If you are lucky they fail their morale and die (as since they cannot escape they are removed as casualties), if you are really unlucky they kill your chimera.  Mitigate this by not tank shocking a unit with a good anti tank weapons.

This is harder to pull off but I have used this to run over SM bike squads and it can be a way to deal with pesky stars with rerollable invul saves but not great anti tank weapons.   Just something to remember and keep in your tool kit.

Overall the chimera is a pretty darn good transport.  Its by no means amazing, but it has some good weapon options and is cheap enough to still take a good number of them.  They give you mobility and work as great disposable battering rams when you need them.  They do need support though with weak rear and side armor so pay attention to your movement and what other units you have to protect their sides and rear.   Fortifications and terrain is the chimera's best friend giving them nice things to hide behind till they are needed.  Its also good to protect their sides and only have the front armor showing.  Don't be afraid to throw them away though, they need protecting early on,but once they have delivered their squads they are expendable to keep those squads alive and taking objectives.

I hope the new codex will allow autcannons like the FW one, prob not but I can hope.   Im not sure if they should be cheaper or not, they are fine as they are in points, but maybe need some rules tweaks.  Don't expect too much love on them though, Melta vets are still in living memory so expect something to nerf that.  Most likely less models being able to shoot or restricting it to lasguns only minus one out the hatch.  Will be interesting to see.

Ok well I hope this is helpful and please feel free to send questions my way or leave comments of tactics that have worked for you.