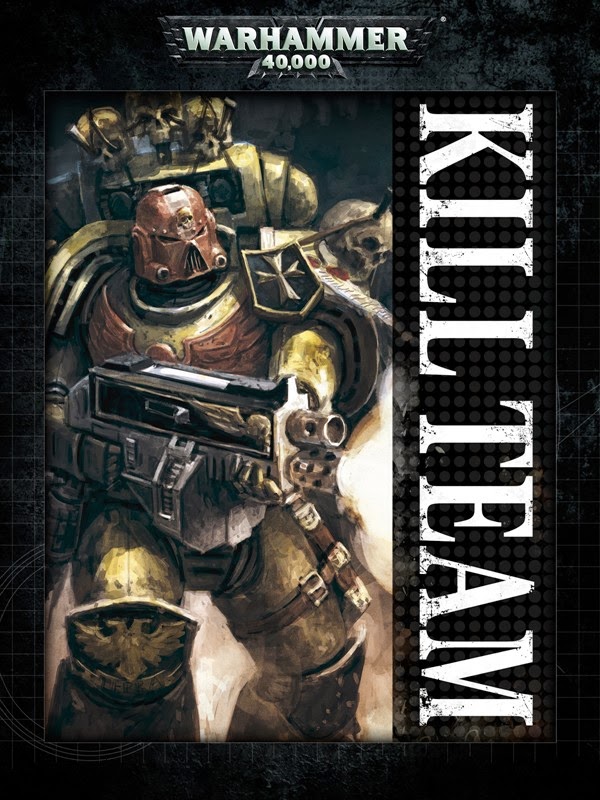 I have been playing kill team and liking it a whole lot.  It is definitely a worthy buy if you have not done so and is a great way to get a 40k fix without spending a whole night just to get one game in.  I took on my brother this weekend against his new necrons, as kill team is about as big as he can go right now.  He brought a Wraith, 5 Warriors and 5 Immortals I believe.  That's all I can count in the pics you'll soon see and I don't remember his exact list.  His wraith had the whips that make you initiative 1 and the immortals had tesla's.  Fair warning I got my ass handed to me by my bro and the dice gods :(. 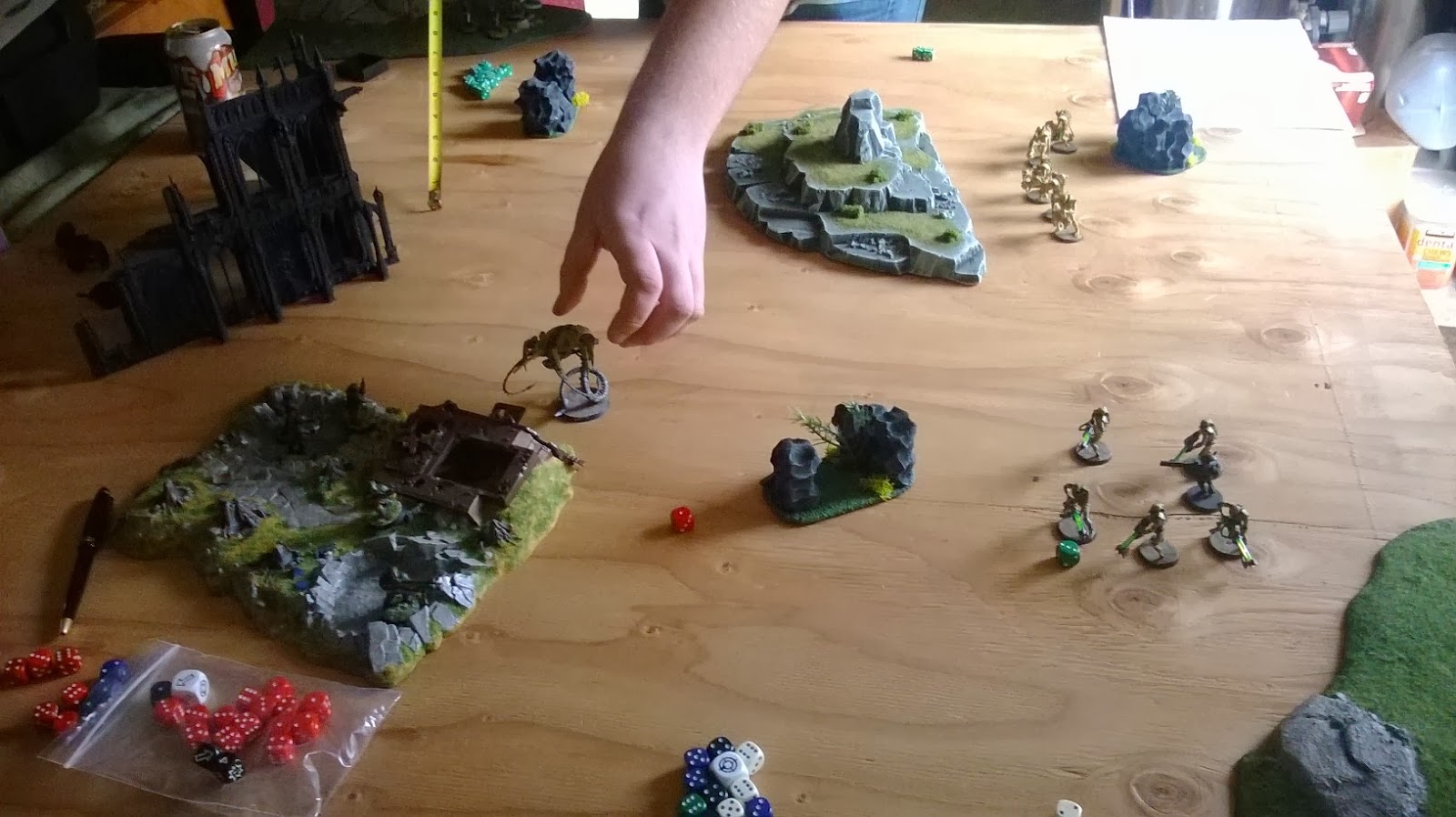 I went second, but I totally forgot that he had infiltrate on his Wraith which royally screwed me.  I had a vet squad with harker, two plasma guns and a melta.  As far as specialists I had a master crafted and preferred enemy plasma guns, and the melta had FnP I think.  He had one immortal with preferred enemy and a warrior with FnP.  We got the supply drop mission, which was actually really cool.  You place 6 objectives, then you scatter them.  When a model is within 1" you roll a D6 and on a 6 that is the objective.  1-5 the marker is just discarded, unless its the last one which automatically becomes the objective.
He won the infiltrate roll and placed his wraith right by that ruin.  I split up (mistake) and placed one team with harker in the area terrain on the bottom and another on the hill on the top. His wraith came out of the gate and went straight for harker.  I totally forgot that he couldn't assault first turn as he infiltrated and went first.  Blah my bad, I might have made a difference.  He assaulted harker, they slapped each other.
I rolled horribly this entire game.  I did nothing in my turn, I moved some guys, and waited to see what would happen.﻿ 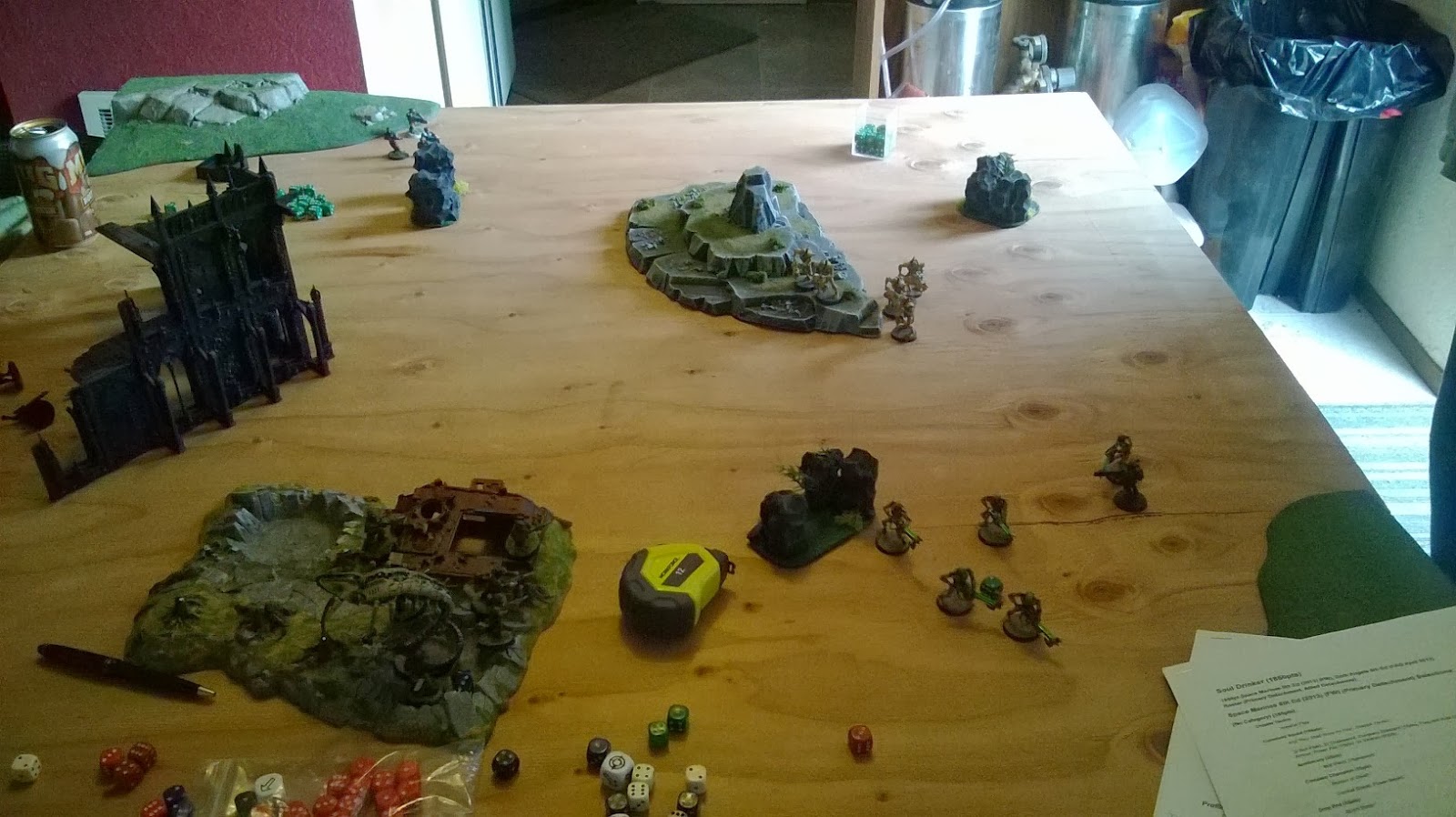 He moved his immortals onto the hill in the center, moved his warriors up to support the wraith.  He got lucky and rolled the objective so was sitting nice and pretty.  Killed harker in CC and my melta gun.  Luckily the only thing I was doing ok was my cover saves, having camo cloaks and stealth were keeping me in the game.  But I continued my crappy rolling and did nothing again.  Not a single wound with 4 plasma shots and a lot of lasgun shots.  Woo! 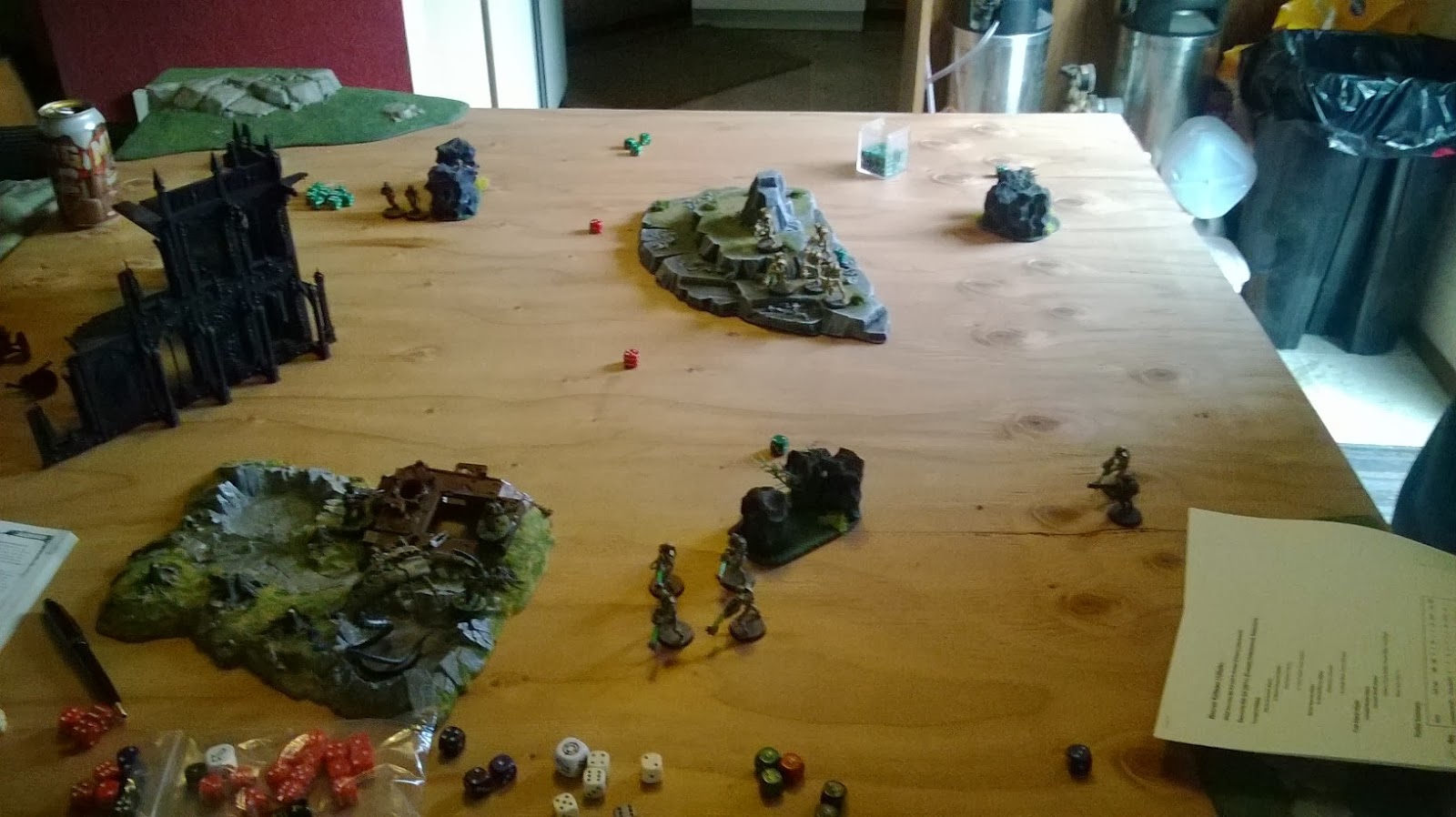 At this point it was not looking good.  The wraith killed another guardsmen, another died to Gauss fire.  I fired and did a whole lot of nothing.  It was pretty pathetic.  So many 2s.  Luckily my team on top was still intact and firing, though doing nothing. 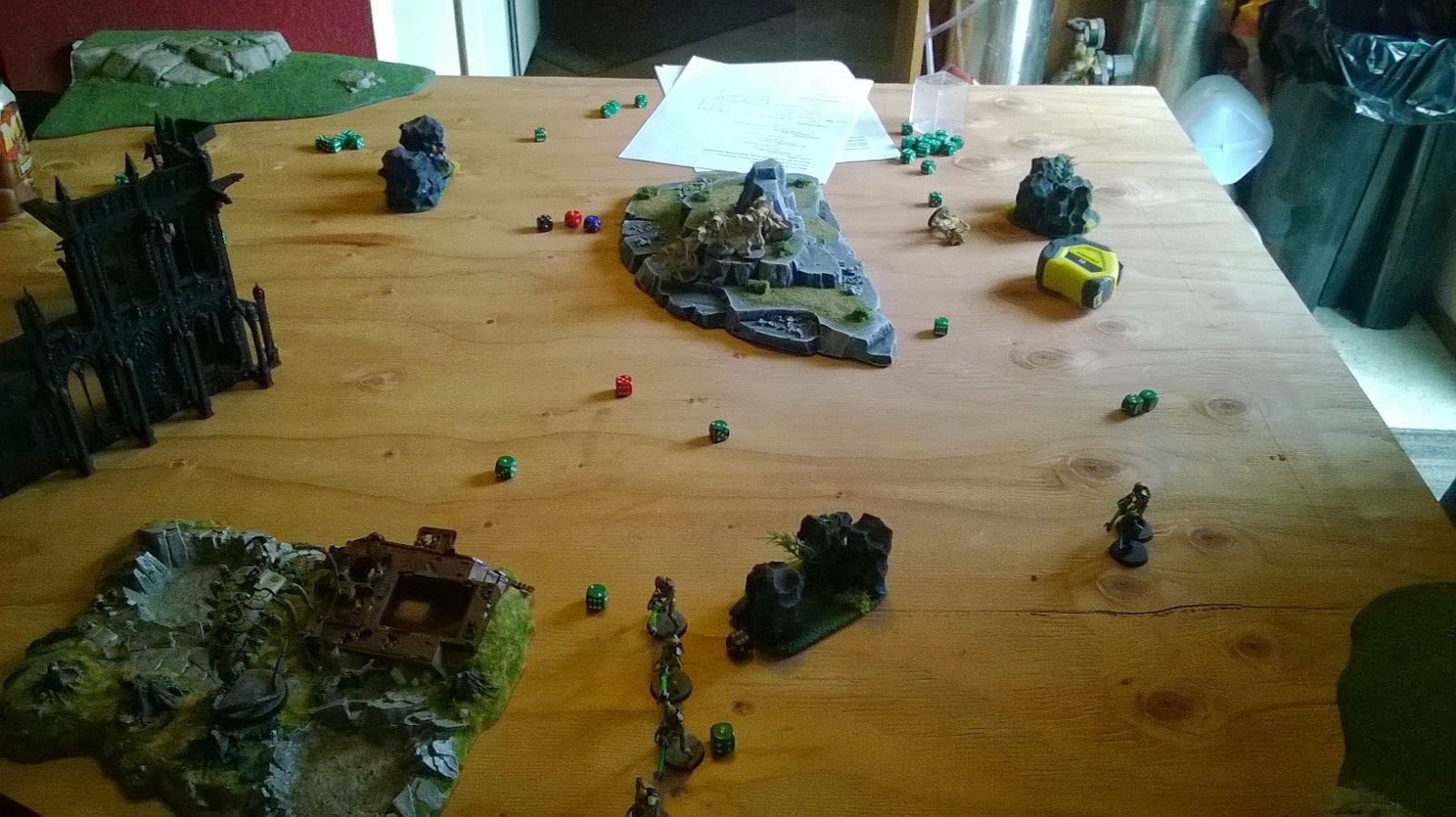 So ended the game here.  He pretty much wiped my bottom group out and my guys on top had no way to fight through that many necrons in order to get to the objective in the corner.  I killed an Immortal though!! Woo I got one.  Yeah it was a slaughter.  Goes to show how a few mistakes and bad dice can totally screw you.

My big mistake was in not just deploying first and taking the building.  I had it and I could have hid in their all day taking pot shots till they were weak enough for me to come out.  I will remember next time that he cannot assault when infiltrating and going first, as that would have made a huge difference.

Next game I changed it up and brought marbo though I dropped a bunch of weapons and doctrines.  We played the king of the hill mission, this is one I really like as its kind of like the relic except no one can steal it early and run off with it so its a lot fairer to slower armies. 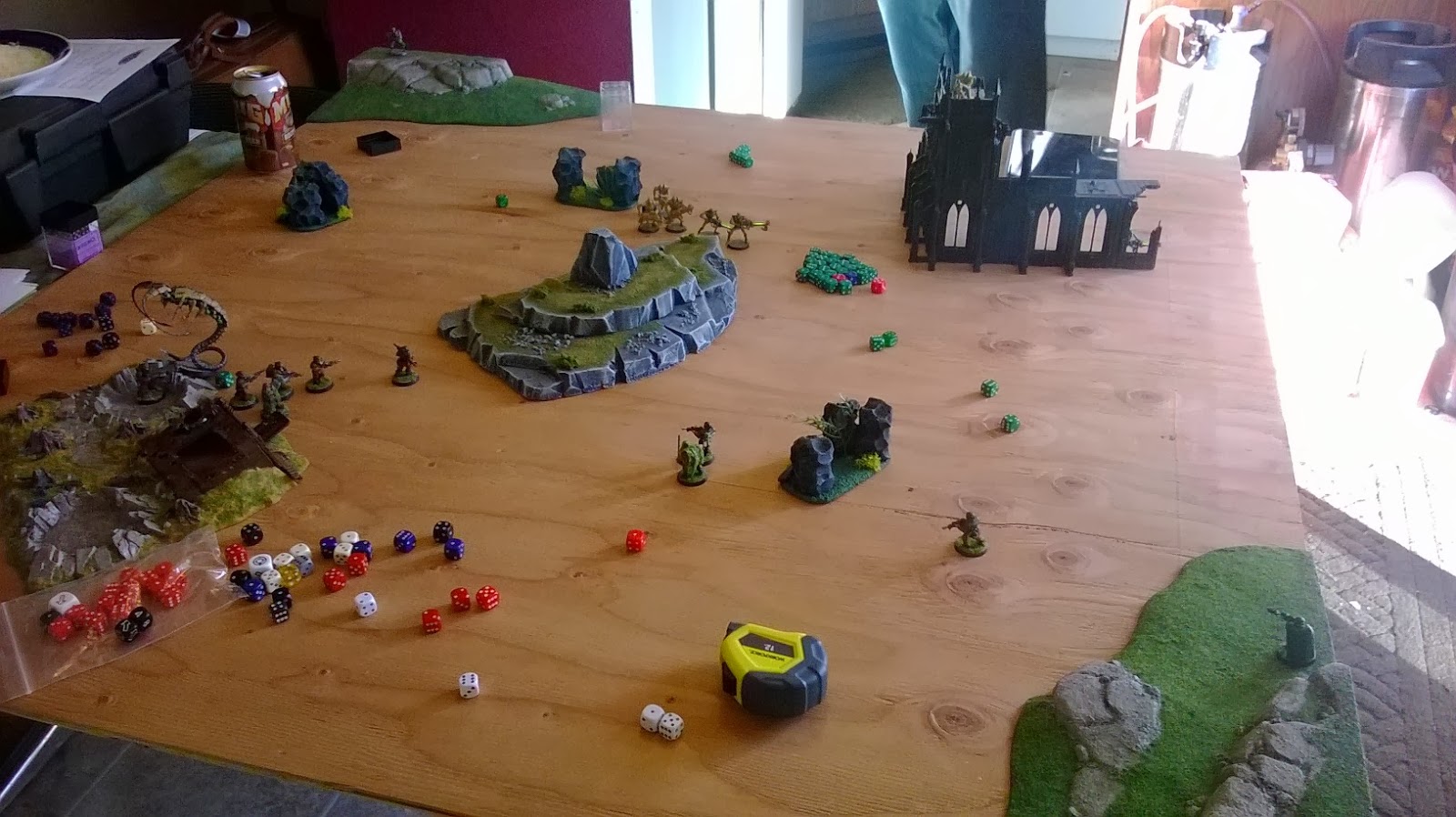 I deployed in a forward screen, with my snipers on each flank.  Marbo we up in the middle, he started behind the rock and kept a meat shield guardsmen in front to get a cover save :).  Brother won the roll off, I again forgot about infiltrators not being able to assault the first player turn.   Oh well.  He cam out of the gate and charged harker.  They put a wound on each other.  He moved up the center with his main force for the hill.  He had two immortals and a warrior in the ruin and one behind the rocks on the let, hie warlord sat in the back on a hill. 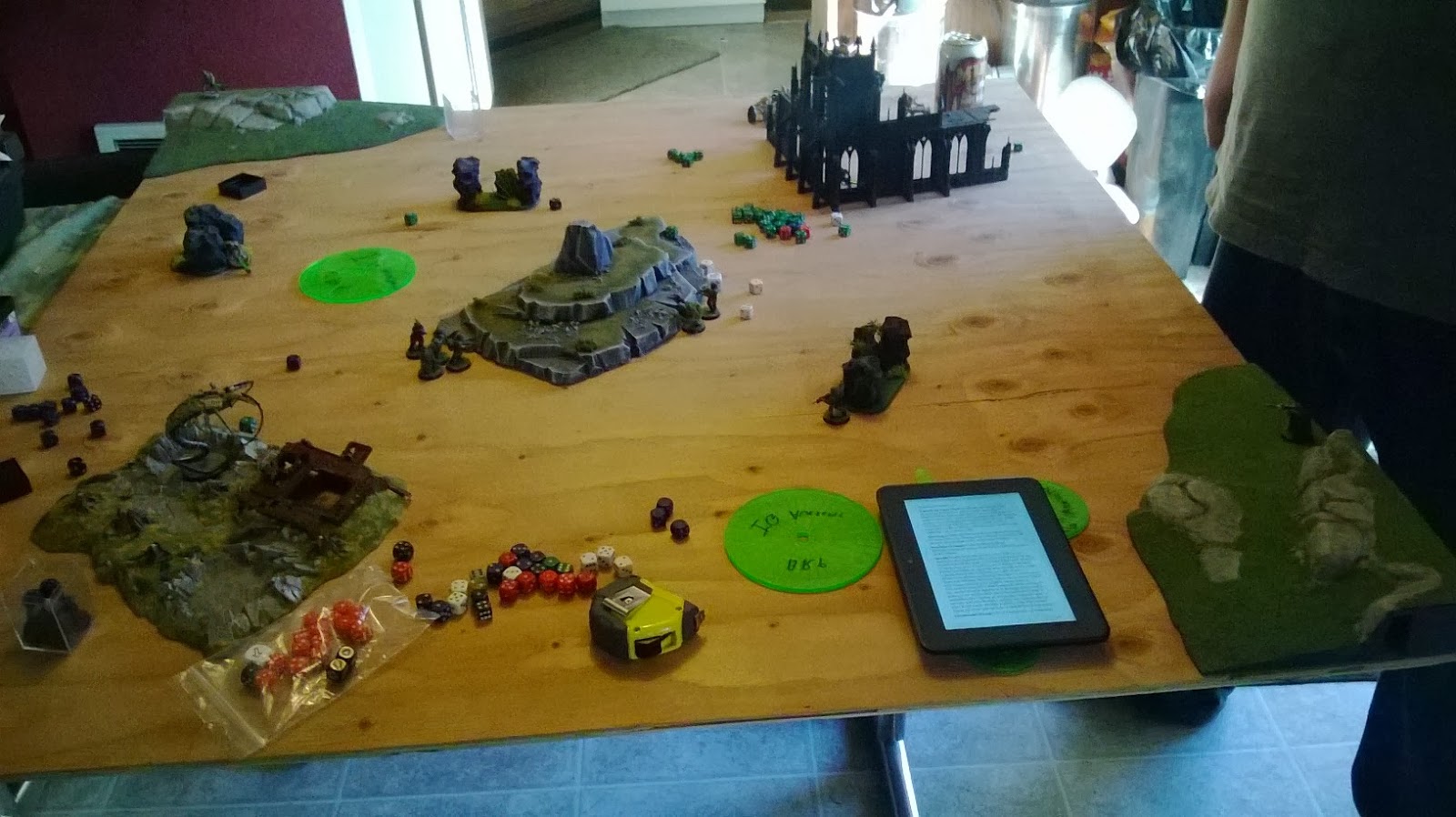 Harker was dead.  He also picked off a few guardsmen, but after he moved up on to the hill on his turn, I was able to have marbo just get into range and demo charge all six of them. .  One lived but then my sniper finished the last one and with no other necrons within 2" they all died :).  This was much better than last game, but other than marbo, I was still rolling horribly (I did roll snake eyes for scatter, luckily good in that case). 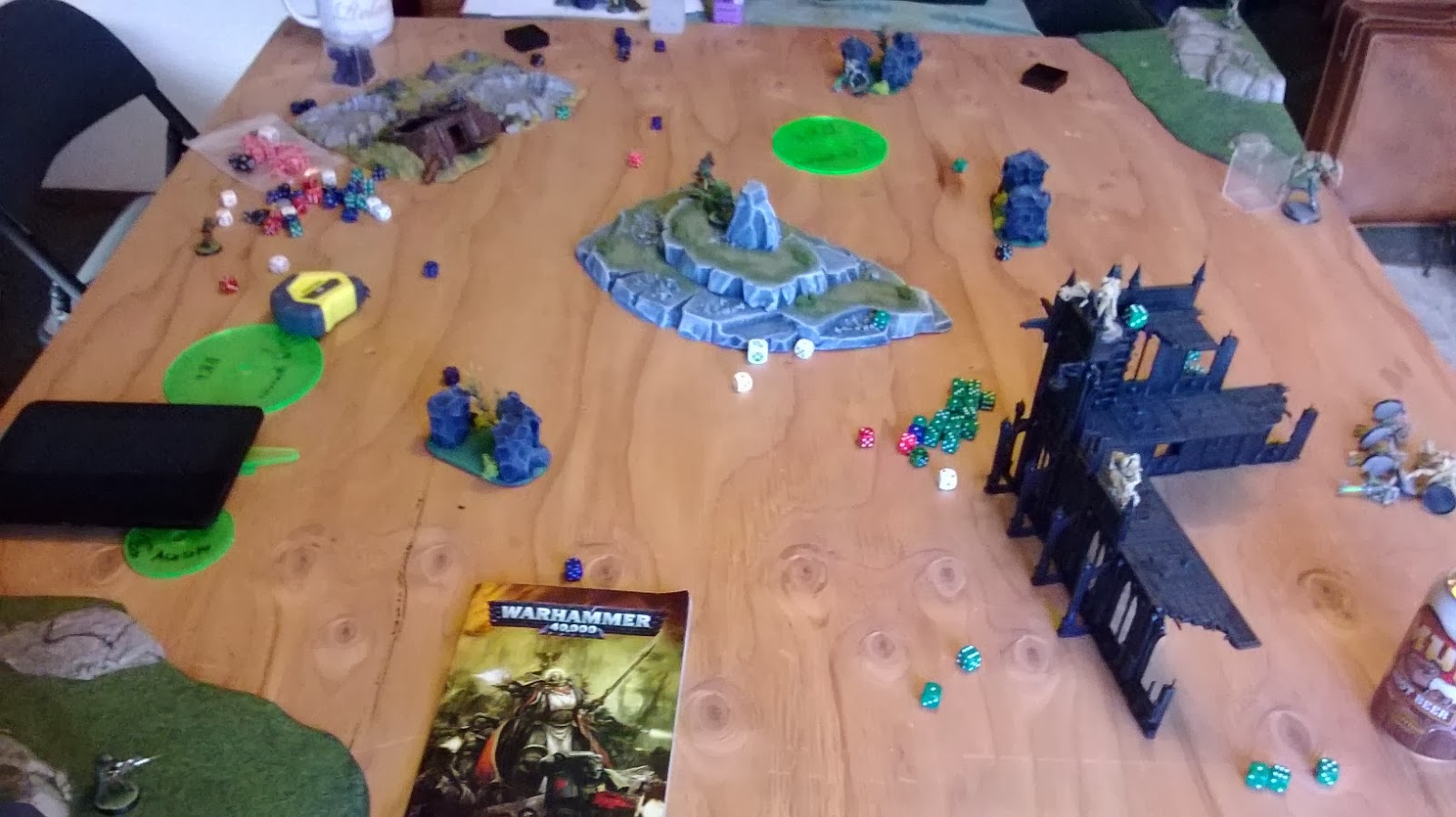 So he moved up and charge two guardsmen with his wraith, killed one, and killed on more in shooting.  In my turn marbo made the charge in to the wraith and killed him, luckily the other guardsmen taking the wraiths kill shot.  At some point marbo had taken a wound too, though I forget from what.  I consolidated up onto the hill and tried to stay out of LoS of as much as possible.  My sniper killed one of his warriors in the ruin as well.

At this point we both got below our break threshold.  Had the game ended that turn I would have one, but I ended up losing all but one of my guys to break tests so it really hurt, I had the objective but he had the bonus objectives minus line breaker.

This game was better though my dice were still horrible.  Marbo did a lot of work and I will try to bring him in more too as he can work well in the small setting.  His only weakness is that he needs cover in order to survive.

I also made too many mistakes with my deployment, and unfortunately the dice were not with me, as most of my kills were all due to marbo's demo charge.  Will go for numbers next time and see how well that will work.

All in all though Kill Team itself is great and I am having a lot of fun with it.  I love the missions and how they play out.  Its a great way to pass the time and have a little fun.
Posted by Grumpy Guardsman at 12:51 PM