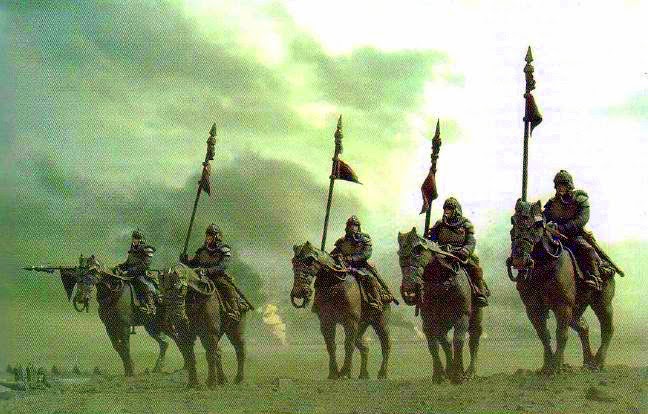 Today I would like to talk about Rough Riders, one of the fast attack choices in the IG codex.  They honestly aren't the best, but are slightly better than before and gain some utility in 7th as well.  The short of it is they are cavalry with cardboard armor but can hurt on their first charge.  Now I have made my feelings on the idea of cavalry in the far future, we stopped using them after WW1 for a reason (tanks) but whatever its 40k.

So what you get is a five man squad for 55 pts, not much change in their price at base, but individually they are one pt more to add additional riders (10 to 11pts).  Mogul Kamir is no longer an option, which is a pity as he would be good under the 7th rules.  They are slightly better now in that they have a laspistol AND a CCW instead of or.  So they get to benefit from an additional attack at least.  Hunting lances changed slightly but are effectively the same.  They grant +2 initiative the turn they are used and add +2 to S and are AP3.  They is no way to get more.  They have Frag and Krak grenades and two can take a special weapon from the standard list.  The Sgt can take a Plasma pistol for 15 and the same pts for a power weapon (no p fist).  You can have up to 10 rough riders.

Their main problem is that while they are fast being cavalry, they have cardboard armor and are hard to hide, and take a risk with dangerous terrain tests by moving through terrain.  The point is that they are going to die.  They aren't terribly expensive, but I would not say they are that cheap either given how easy it is to remove them.  So when using them they are a throw away unit that you want to get the most use out of them before they go.

Taking two melta guns is one of your best options here, as they are decently good at killing vehicles by having krak grenades and can move fast.  Your goal with them is to use large vehicles to screen them early and then charge into enemy tanks.  You only have two melta shots so remember odds are you get one hit and if you are within 6 you stand a good chance of penning but most likely won't kill your target so its very important to set up the charge.  Don't worry too much about using hunting lances on vehicles, as long as they are rear 10, they are worth using simply for the number of attacks you will get.  The other advantage is that since you do not lock into combat with vehicles, you don't have to worry about moving on next turn, if they survive.  They work best at popping transports open, allowing you to save dedicated AT weapons for higher threat targets.  If they survive they have krak grenades to use the next turn.

They may not be the best AT unit, but are relatively cheap and importantly mobile to keep up with transports and other vehicles.  If I was going to get a power weapon for the SGT it would probably be the power lance, really just because it would look cool and the I and S bonus on the charge is a good thing.

Another way to use them is as a counter attacking anti infantry unit.  Give them two flamers, keep them hidden till the enemy gets close, then move out and charge.  Two flamers can cover a lot of models and they can do decent damage to even horde units.  If you have 3+ save targets, they should be priority for the first charge, to get maximum use out of the lance. However don't not use them because you might get the chance to target a 3+ save unit, when you have a mob of gaunts or orks about to overrun your line.  In the end these guys are there to be sacrificed and die and do as much damage before they go.

They need cover, plain and simple, as they will die to a stiff breeze in the open.  The best way to do it is to use vehicles to block LoS.  This also has another use in helping them get across the field to actually charge something.  Use careful positioning to keep them behind vehicles and out of as much fire as possible.  Use LoS blocking terrain is also critical.  In the end though, if they need to run out into the open to get to the target, then thats what they have to do.  Don't be too cautious with them.

Overall they aren't technically bad, they just aren't that great either.  Now there is another unit that is pretty good, though it needs an update and that is the Death Korps of Krieg Death riders.  And here is why they are good.

They have carapace armor, 2 wounds, get to reroll failed dangerous terrain test, are WS  4, have 2 attacks base, the Sgt 3 and a 6+ FnP, and iron discipline.  They cost 15pts per instead of 11, but that is well worth it here.  The best part is that they can be taken in platoons, with an optional command squad and up to 6 rider squads.  They cannot take special weapons, but at that point who cares.

Plasma pistols on the sgts is probably a must take.  They can take power swords and axes, that do not replace their lance.  Over all this is a really good unit that is much tougher than regular rough riders.  With krak grenades and extra attacks, they can still target vehicles and infantry.  And can be taken in numbers that they can really stand a chance of surviving to hit home.

When they DKoK list gets updated, I may actually pick up some riders just to use these guys, as they are quite good.  So in summary if you want to use rough riders, don't, use death riders.