The Orks are Here 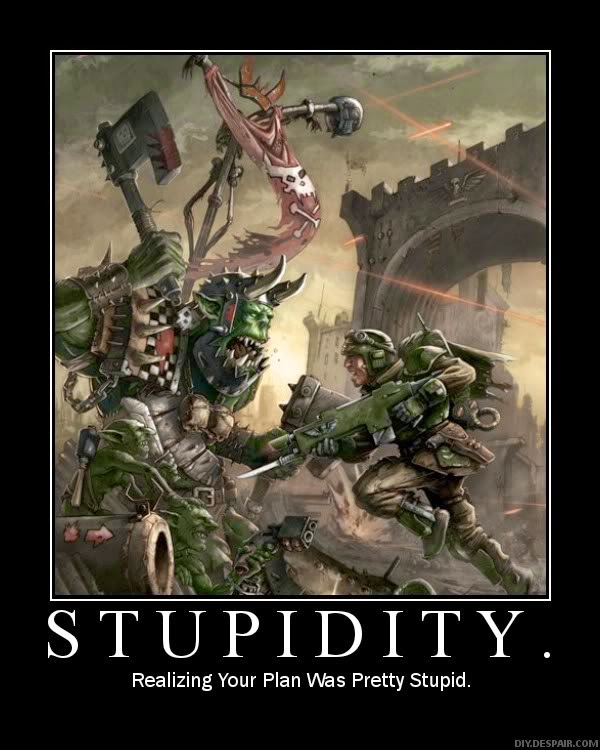 The orks are here, and I am looking forward to fighting them.  Since I face them regularly, I will talk about what I think about the new codex and what we are going to be facing in the days to come.  Overall I think the codex is very solid.  WAAGH! works again and orks now have a ton of options to get some ridiculous long charges off.  Its not all peachy but overall I see this codex doing very well as time goes on and orks get their feel.

The major change is that WAAGH! now works like it used to, allowing units to run and charge in the same turn.  Most ork squads also have ere we go, letting them reroll one charge dice.  Combined and you have a very nice combo for getting some long charges off.  This is going to be the theme of this codex, long charges and fast moving units.

Arguably the fast attack section got some huge buffs. All the units got a nice price reduction, with warbikers, choppers, and buggies all getting reduced cost and some free upgrades.  I really see warbikers rising up over the old nob biker staple for their cheap cost and utility.  Note if you are ork and want a biker army, you can still take three warbiker squads and three nob bikers for a lot of bikes and they score now so the net gain is higher than being able to move to troops, as you don't need it to get the main benefit.  Having lost that option is a bummer as it was a very orky army, though in essence you can still do it.

The other slot that is really good is heavy, there is just so much good in there.  Lootas are in there and cheaper, as well as mek guns, battle wagons, WD looted wagons, orkonaughts, flash gitz.  Flash gitz unfortunately prob don't belong here and should be an elite choice, it would make more sense and give them a real chance of being taken.  As is they directly compete with lootas, who have better range and are cheaper.  Its a unit that isn't bad, but suffers from better units being around it.  Mek guns are straight awesome and expect to face lots of them.  Lobbas are dirt cheap and great, and since artillery count as T7 when shot at, they are going to be tough to remove.

Mob rule is changed, and I know there is issues with it.  Personally I think fearless was a little too strong and I think the new mob rule is almost right, if straying on the harsh side.  But it is super fluffy, orks are always beating the crap out of each other.  And you get two chances to pass a LD check, which very few armies get.  Mob rule rewards having large mobs with characters and I certainly don't see large boy mobs going away.  It also balances out for low model squads for orks, like mega nobs or others that never could really benefit from mob rule.  All in all I think mob rule is fine and orks will still function.

So what am I expecting to see?  Mek guns, bikers, mixes of large and trukk boy squads.  Lots of Meks and a warboss thrown in for WAAGH!  For us IG players, the Mek guns are going to be the priority targets, and the warboss/waagh giver.  The mek guns are super cheap and nearly every one does something bad.  You should target them early with your own artillery.  Wyverns will struggle though because of T7, needing 6s to wound.  Surprisingly the Basilisk is your best weapon that can counter mek guns, being able to beat their toughness and armor save(of the guns).  Also since they will be far enough away, you won't have to worry about min range.  Otherwise leman russ MBTs can do well in targeting them and getting wounds with all the extra grots and giving you a higher chance of hurting the unit.  If you have a lot of autocannons, these are another choice, though you will need a high volume of fire to get enough wounds on them.

The warboss is one of the few that can issue a WAAGH!, so kill him.  Wyverns will be good for this when he is in the open.  Target him and force saves on him.  If he is in the vehicle, kill it and then focus fire on the squad to kill him.  This will be easier said than done, but the killing the WAAGH before it goes off will go a long way to helping you defeat them.

Added to that, pay attention to your distance.  You need to keep standoff as the orks can move surprisingly fast and once WAAGH is called get long charges.  So make sure to have a good distance and not risk units getting hammered.  The few exceptions are units like ogryn/bullgryn and conscripts.  Both are good to move up front and engage and slow the ork advance as far as possible from your main line.  Ideally you get units stuck in combat so that when they get their WAAGH off, they will not be able to use it to full affect.

Fighting the new orks is going to require fighting in depth.  Having a front skirmish line to engage and distract the main advance, allowing your main infantry or tank lines to do the damage for as long as possible.  Tank companies are going to have to really watch out for fast moving units like warbikers with a nob with PK.  Choppers and buggies with TL rockets will be a danger as well.  The new orks actually will be very well suited to taking out and Armored IG army so you will have to target these fast units like bikes early.  Use supporting units like sentinels and your few troops to protect them and buy time for your tanks to bring their fire to bear.

Infantry heavy IG armies will be well suited to fight orks, especially when backed up by artillery.  Have a good mix of tank hunting units and anti infantry, with wyverns to deal with pesky units like bikers and large blobs of boys.  Storm boys are another threat with their huge charge range potential with Waagh! so kill them as well if you see your opponent measuring for next turn.  Use cheap infantry up front to soak the charge and wounds, buying shooting more time.  Target the warboss and try to kill him before the Waagh is called.  If you can't then switch to your most threatening targets.

Time is going to tell as to what the stronger ork armies are, but make no mistake they will be still punching stuff a lot and can do it much better than before.  Ork shooting is still good in its quantity and their mek guns will wreck face if left unopposed.  The ork army is one that is going to be fighting in depth, with you being hit by units in your face and all the way at the back of the board.  If you can't prioritize your targets, you will struggle to beat it.

Good luck facing the new orks, I see them going strong for a while coming.