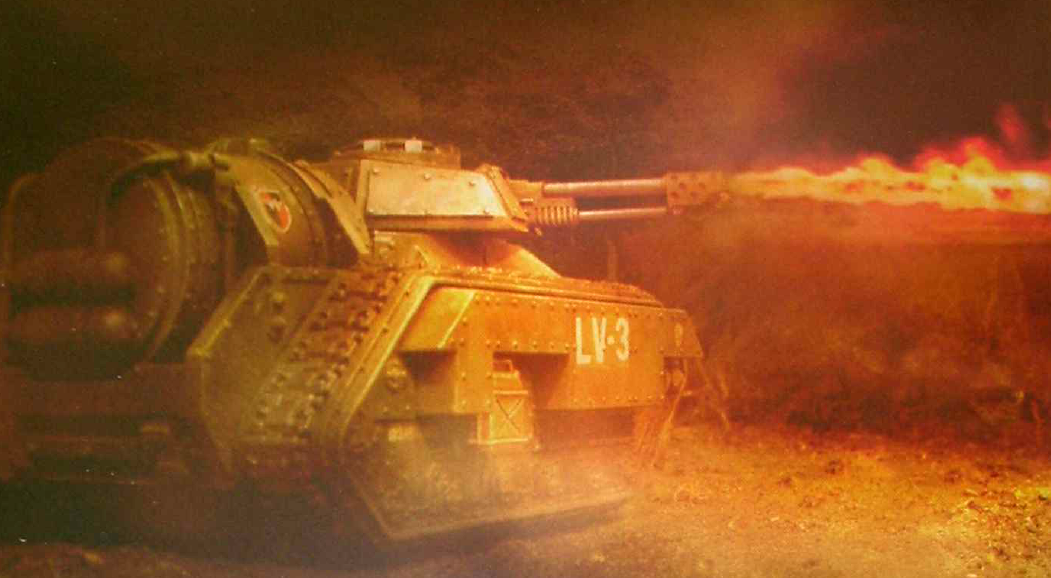 Next on the list is the hell hound and its variants.  I have liked the tanks over the years, being one of the classic imperial guard vehicles.  Last codex, lets be honest, vendettas ruled fast attack so hell hounds were not seen so much.  Not because they were bad mind you, but the other option was just better.  Now though they are better, being able to score.  Yes I know I keep repeating it, but its important to remember when comparing between the flyers as they can't score (unless they drop into hover) and something to consider when deciding what to bring.  The other great thing is that they can move 12" and fire two weapons at full BS, so really there is little reason to not move them around.  Over all they are probably one of the more solid fast attack choices we have that are at a good price for their utility.

In speaking of price, there are some changes that affect your decisions.  The base hellhound is the cheapest now at 125, less than before.  The devil dog (melta cannon), is the most expensive at 135, going up 15 pts, and the bane wolf stayed the same price.  Only other real big pts change is that the multi melta got 5 pts cheaper, which is not as small as you think.  Ok so lets go over the base stats for those that aren't familiar.  The hellhound chasis has AV 12, 12, 10, is BS 3, and has 3 HPs.  It is a fast tank.  The hellhound is armed with an inferno cannon which is torrent S 6 AP4, the devil dog is armed with a melta cannon which is 24" S 8 AP1 small blast, melta.  The bane wolf comes with the chem cannon, which is template S1 AP3 Poisoned 2+.  All have a hull mounted HB and can replace it with a heavy flamer for free.  Multi melta is available to all at 10pts (replaces HB).

Here the Devil dog took the biggest hit, its probably not overpriced, but it just feels like it is.  With a MM, its 145, not a whole lot cheaper than a vendetta.  The hellhound though is the big winner here, as it is cheap, and you throw a MM on it and it can shoot at tanks if need be and take out models with better than 4+ saves.  This becomes better in a squadron with three, giving you a flexible unit that doesn't cost a whole lot and has decent armor.  I like this option more now, as you still get the wonderful crispy toasting of infantry with the anti armor capability.  And inferno cannons are S6 and with torrent, you can hit side or rear armor with out too much trouble as long as you are paying attention to your movement.

Its important to remember that the hellhounds come in a squadron of 1-3, and can be mix and matched.  I like the the bane wolf, but its short range is a limiting factor, putting it close and into harms reach, and is really vulnerable to getting popped in CC.  AP3 is nice, but AP4 kills enough things in 40k outright so for me I would go towards the standard hell hound.  If you are going for the Bane wolf though, the free heavy flamer is probably the best way to go, giving you good template double tap in close range, but remember with new shooting rules one has to fire first and resolve wounds, so you may end up killing everything with the first shot and the other left with nothing to hit.  Fire the hull heavy flamer first in most occasions, as the turret mounted chem cannon has a little more flexibility being able to turn it.  The best way is to maneuver your bane wolf in such a way that the hull HF can target a different part of the unit and turn the turret to target another, so you aren't getting over kill.

The devil dog is still a good tank hunter, and the MM upgrade is a must.  Though the cannon is a blast, they are effectively the same gun profile and damage wise, the cannon can just kill more infantry, and if your lucky multiple vehicles if your opponent isn't paying attention to spacing.  A pair of them is the best.  I have tried running them on their own, and I have yet to really get them to deliver.  A pair will do more damage and is more survivable in the long run too, its a better guarantee of a kill, which is important, as a long one is still only two shots, so lady luck can rain on your parade more often than you think.

I keep coming back to the hellhound and MM, utility wise it is really hard to beat.  It has the range over the bane wolf, and with the MM it can threaten even heavy vehicles.  A squadron of two or three will burn a lot of things to death and get a couple of melta shots in to make a difference, and against a lot of targets S6 is still more than effective.

Now using them is another story.  They work really well in chimera heavy armies, as they have side armor 12 while chimeras don't, so you can use them to protect the flanks of your chimera's as they advance.  They work well with scions too in taurox primes, as both can move fast and the hell hounds/devil dogs/bane wolfs heavy armor and weapons give needed support to them.

They work well in a vanguard force, moving up and removing dug in units from cover and clearing objectives for your infantry to take, or even the hell hounds themselves.  They can remove a lot of infantry from the board and have the maneuverability to get where they need to be.

As flankers they are another good choice, as they can sneak around terrain pretty quickly and get into your enemies side or rear to hit weaker targets and remove some of the pesky units dug into cover.  Also they are decently armored enough that they can take a decent amount of incoming fire, and using terrain to block incoming fire is important to boost their survivability.

Another role they work really well is that of the lurker.  I've used them to hide back, darting between cover and popping out to hit targets that get too close.  With torrent the base hell hound is really good at supporting your infantry on the front, raining flaming death over them onto enemy troops closing in on your lines.  The devil dog works well here too, as it can pop out to hit targets of opportunity and is great a popping tough units that like to deep strike in.  This is great for the bane wolf too as it has the shortest range, and using it this way increases the likely hood of surviving.  They are really good at plugging up a hole in your lines, moving forward to poison tough units that are trying to break through.

Overall the hellhounds are really good choice as a fast attack, and with the current cost of the vendetta, they are cheap and bring the pain.  The most reliable one that brings the best utility is the hellhound with MM.  The devil dog is good, but in my experience it needs multiples to really work, where a single hellhound is just about always roasting marshmellows.  The bane wolf just has too short of range, its still good, but is a little more specialized to truly be a good all rounder.  The bane wolf can be really good in a squadron of 3, with two hellhounds to support it while they get close, till the bane wolf can come in and roast MEQs.  Overall they answer a good problem for IG, giving mobile units that can deal with dug in infantry, or anti tank.  These are good choices to consider, and can fit into any imperial guard army.