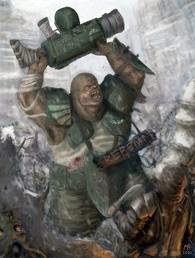 Recent rumors have come to light concerning the new IG and it is about the Ogryns.  Faeit has been on top of the rumors so check em out there if looking for the full details.  What the rumor is about is that a new plastic box of Ogryns have been sighted and the differences that it has.  The first thing is that it is supposed to be a dual kit with regular and some sort of 'armored' ogryn.  They have riot shields supposedly but other than that no big details.  The other big thing is that they are supposedly named Militarum Auxilia.  This could point more strongly in the direction of the name change.  So what does this mean?

Well first off this only means anything if the rumors are accurate, so it could be accurate or it could be a load of crap.  If it is this is interesting as it shows the Ogyrns getting some support.  The move to plastic will be awesome but I wouldn't expect a huge price cut as I'm sure the squad box will be in the $80 range.  Now it could mean though that they receive some support in the new codex though, as new kits can mean GW trying to push them especially since they are not a high selling item in the past.

The counter point to that is the new tyranid codex.  Warriors and Hive Guard received no real updates (Guard got worse) but got new kits.  So just because a unit is getting an updated kit does not mean it is going to be a good rule set for it.  Sure Ogryns could look awesome, but if they stay the same points, I don't care how cool they look, I already have 10 that sit on the shelf and they don't need reinforcements.

If it is indeed a dual kit though, this could be good news as generally from the latest releases, at least one of the units in the dual kits is pretty good.  So it could be ho hum Ogryns or the new armored Bullgryns.  I really hope that at least one turns out to be useful.  The main issue that hinders Ogryns right now is their price.  A chimera can take them and they are tough enough on their own to survive the initial fire most times, but they are no where near their worth in points.  That GW seems to think Ogryns are on the same lever as terminators is ridiculous.  Hopefully they will be smart and reduce the points cost or give them some way to work.  The IG really love having a tough unit that can soak punishment and hit hard in CC.

Ogryns main issue is that they pay a premium for T5, yet still only have a 5+ save.  Bolters can kill enough of them that Ogryns can't survive in the open, and are too expensive to go the Chimera route.  An option for better armor or simply making them cheaper so a 10 man unit is feasible (400pts! are you fucking high?!).

All in all this is an interesting rumor, I will wait before I really believe that it is true.  It is in line with the current releases and the updating of models to plastic.  I know there have been rumors that the ogryns and other auxiliary troops are getting dropped, but that is highly unlikely.  This rumor seems far more believable especially with GW releasing lots of dual kits and giving love to units that haven't been selling.  I am really hoping for more to drop regarding IG, but this could be a good sign of where the new codex is going.  Or it could all suck, who knows.