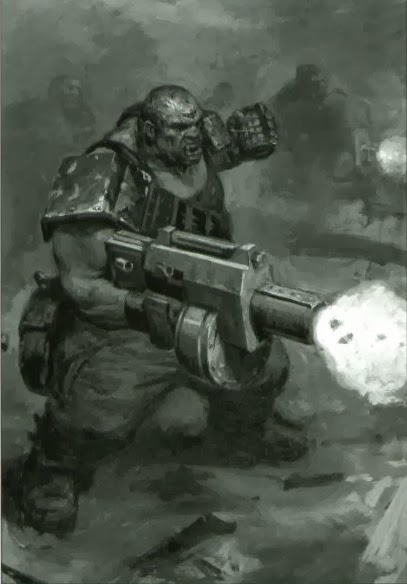 Alright, so nothing really new has dropped in terms of IG rumors, but I want to go through some of the most recent with some critical thinking and also in light of what we know about the new Knights.  Now not too long ago 40k radio/Faeit released a rumor stating that everyone would get access to ogyrns/stormtroopers/commissars and that it would be a part of the new knight codex.  Now this was a sketchy rumor and I really didn't buy it.  But we now know more about the knight codex and that freeblades are not a mercenary sub faction but just other knights that have no allegiances.  So what does that mean about the whole Auxilia thing?

Well I will say that I thought it was going to be a data slate/formation all along.  For those IG players who have been around for a while and played some Apoc, you will be aware that there are two formations from the old Apoc.   One was an Ogryn formation, which consisted of a few commissars and then a bunch of ogryns.  The other was simply a formation of storm troopers with some cool rules for them.  So what I think is these formations are going to be adapted to the new codex and released in a dataslate in the fashion we are seeing with tyranids.  I doubt it will be a formation like the Tau or eldar as all of those one are actual boxed sets, so maybe if they do a couple new big boxes but other wise I doubt it.

Most likely the rumors that we are hearing are all getting jumbled together, so the whole auxilia thing is just a mix up and it is something that will come out after IG is released.  And it being part of any army, well since IG can ally with just about anyone right now, its really no difference, just that you can prob take more than as IG ally.  So really no difference than how things currently are, except no HQ/troop tax.

Now don't get me wrong, I am excited about the rumor, as it hopefully means these guys will be getting some new love.  That being said, don't expect anything too revolutionary, I'm sure some sort of formation will come out and other armies will be able to take them, but it will hardly be some separate codex from IG.

Will be really interesting to see what more comes out.  We know that new kits are coming and ogryns and storm troopers heavily rumored among them.  I would like to note not a word of a super heavy or flyer has been heard from since many months ago, so hopefully neither will come to pass, as with escalation and vendettas, IG have need of neither.  So hopefully the models are good and the rules as well, as both those units are horribly over priced right now.

Overall I think the rumors are good, if not too great.  I really am wanting to hear some rules, models are great, but I need me some crunch!