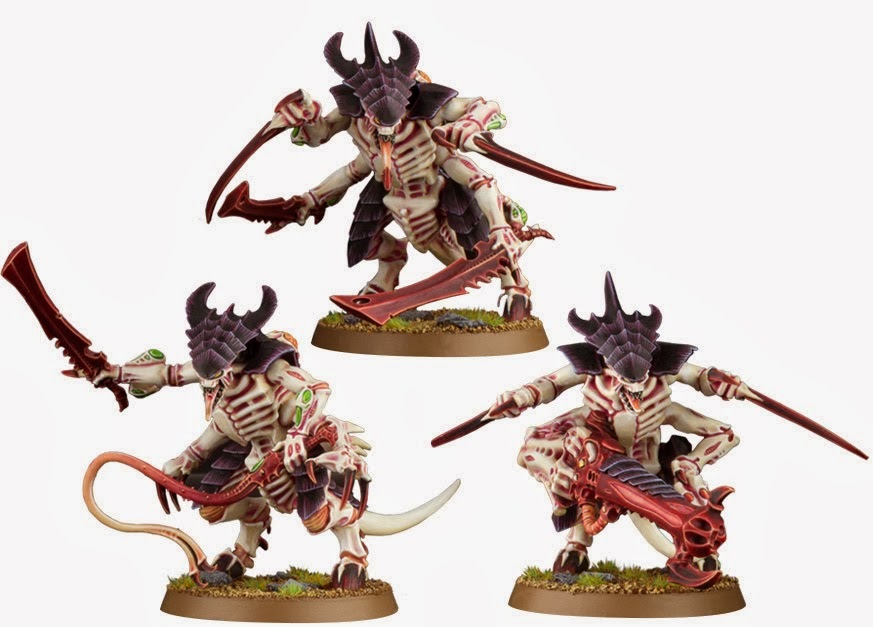 So got some gaming in this weekend, finally.  I forgot to take pics of it so sorry.  I played my brother with a mech IG army vs his Soul drinkers/DA.  Its the first time in a while I have gone mech heavy so wanted to test a few things out.  Also observed a 'Nids vs Deamons battle which was very interesting and definitely confirmed some of my thoughts on nids.  My game went well, though we forgot the SM rules and no one had any at the shop, so ended up making a rule error, but my brother agreed if I was right I would win.  I whined more then I should, its a pet peeve to when someone forgets the rules, but we both forgot to double check before leaving so can't blame him alone.  More on the game later, first I really want to talk about the nids.

While we were waiting for a table, as it was really busy with a lot of small games going on and no table were open, I watched a Nid vs Deamon game, as they were half way through and we ended up taking their table when they finished.  the deamon player was running a bunch of hounds with skull crushers, plus bloodletters and I think horrors (the pink deamons).  He had a lot in reserve.  The nid's had 2 warrior squads, 2 flyrants, 2 dakka fexs, 3 zoanthropes, had at least one venom, a tervigon, termaguants, exocrine, and biovores.  I apologize as I came in mid game so I don't know whether he had more than one termaguant squad or they were all spawned minus the mandatory.  I didn't really get a good look at their lists so its all based off what I say on the table and in the dead piles.

Nids ended up taking the day, despite the warp storm turning the zoan's into a herald, and I was really impressed in how well warriors did.  Granted neither list was "optimized" by internet standards, but both seemed quite good.  Biovores and guants and the tervigon punished the hounds, granted the deamon player lost a lot to instability.  The warriors though were really solid, they shot well, took lots of hits and kept going, and were more than decent in CC.   They just hung in there and held his line and pushed back multiple pushes and soaked up a decent amount of shots, and by the end of the game both squads were still on the board.

I know everyone says they will die fast, and this isn't false but it also isn't the whole picture.  S8 is no longer prevalent. LoS blocking terrain is more prevalent.  Smart placement and use of cover makes a huge difference.  Warriors are not cheap, but as is they are not expensive either.  As a all around unit, they can get it done.  You can bring two large squads easily and still have plenty left over for other units.  If left in the open, yeah they are going to die to concentrated fire, as most things tend to do these days.

After watching that game, my belief that warriors are a solid unit is confirmed (IMO), they just did well.  Nothing crazy but they were a solid scoring synapse unit that could provide fire and still do decent in assault.  I would not go crazy with them and go all out with weapons, but a  standard squad can hold their own and win against most other troop choices.  I think that is maybe the issue, people want to take them as something else or see them as being more than a troop.  Really that is all they are, a troop that is fearless, has 3 wounds, a solid stat line and  a 3 shot gun with a decent number of attacks in CC.  They are small enough to hide and most squads will regret facing them, even marines.

Now I also thing shrikes have the possibility of being very good as well, and these are the guys to give some cc weapons.  They are fragile and will need lots of protection and very smart placement, but they can move fast and with rending claws you have a fearless unit extending synapse and can threaten a lot of units.  That is just me and until I see them used its all theoretical.

Tyranids are not as bad as they are made out to be.  I have seen very different nid armies, and seen them do ok to great.  That is huge and no one wants to bring that up.  I have yet to see a cookie cutter nid army that the past saw.  Yeah the codex could be much better and some opportunities were missed, but if you are one of those bitching about bones swords, I'm sorry really?! You didn't see that coming?!  That was like obvious, have you not seen how CC weapons have been treated in 6th?  Did you really think you would be special?  Rant over.

Nids are doing well and as the codex gets played with, the better lists and units will rise, but first it will take players letting go of their old lists and just trying stuff, and not assuming stuff sucks because the Internet says so.  Like the crone.  Even frontline gaming has flipped around and says crones are awesome now.  I remember everyone saying oh boo they suck they will just die and do nothing.  Now that people are figuring out how to use them, they realise they are awesome.  And I called it, when I saw the book I knew they would be.  They are cheaper and provide the flyer support the nids need with out having to take a flyrant anymore.  Now everyone is clinging to the Flyrant, I really think a walking tyrant with guard is a great option, or a prime hidden with carnifexes, but oh well can't make anyone take them.

Ok on to my game.  I brought 2 LRBT, 2 LRVs, 1 Hydra, 1 Devil Dog, 3 Scout Sentinels, 3 Vet squads in Chimeras, a CCS, an Inquisitor, and a Bastion w/Icarus.  All at 1850.  My Bro had the Soul Drinkers with a Sarpedon(Ran as Chapter Master) and a Librarian, two drop pod tac squads with melta and combi-melta, 5 man scout sniper squad, Storm Raven, Command squad with nothing special in a drop pod.  DA allies with Librarian, a Tac squad with plasma gun/cannon, rhino, deathwing termies, and raven wing bike squad(3).  Got big guns never tire and dawn of war.

I got first turn and deployed with my bastion sort of in the center, with my LRBTs on the left in position to go up a hill first turn.  LRVs were in a ruin on the left with the devil dog behind them, the Hydra and a Chimera behind the bastion and the other two Chimeras on my right behind LoS blocking hills.  My sentinels were outflanking.  I tried to position in a way that would force him to risk the drop in my parking lot, but also stayed far enough apart that would make it hard to just drop in and blow and assault everything in one go.  He deployed his scouts on a hill on my left, his bikes behind a hill  (I completely forgot they were there and when he moved them out I was suprised), and the DA rhino squad behind another hill.

My first turn consisted of some moving up of my vehilces, mainly moving my Leman russes into firing positions.  I prescienced the Battle Tanks.  I shot a bunch and killed 4 scouts, they held and killed the rhino for first blood.  He came in with his two tac squads and tried to deep strike his termies but they mishapped and went back into reserves.  He almost blew up a chimera and then blew up my bastion, this is where we had the rules issue as he had taken the IF CTs and they have a bonus against buildings.  Now he got a glance, but thought he had a +1.  It turned out to be only devastators and only on the table, not rolling for pen.  This would have been huge as the bastion would have survived.  He agreed that I would win if he was wrong, I whined more than I should have but went with it.

I lost my melta vets in my CCS and MoO but still had my Commander, inquisitor and one melta gun left.  Next I countered and killed his bikes with tank shock, I blocked them off with a Chimera and Devil dog, as well as the Vanquishers sealing them in, then I rolled my hydra up and ran them overe with no where to go.  He failed his morale and they got run over with no where to go.  First time I have done that so I am happy to say that I will be trying to do this more in the future.  My plasma vets then unloaded on one of the Tacs, but I rolled three 1s to wound with my plasma gun and ended up only killing three Tacs after all my shooting was done.  Then had similar luck with my CCS with 2 P pistols and a melta gun :(.  Had much more luck against the other squad and killed all but two, thank you leman russes!

His turn saw the Drop pod come in and drop the chapter master come in and the deathwing, but no storm raven.  The death wing did nothing, they had no LoS to anything they could hurt.  His command squad took a couple of HPs off the Hydra and he failed to kill my Chimera that was out in the breeze.  He assaulted my one vet squad with his Tac but they ended up holding!

I brought in my sentinels and they ended up killing the Librarian and last scout.  I killed on of his Tac squads and killed a few of his Command Squad.  At this point he called it, it was getting late and the rest of my shooting would have brought most of him down.  The LRBTs were going to fire big battle cannon shots into the DA Tac squad, the Devil dog had his MM and Melta Cannon lined up on the Termies and I had enough stuff to finish off the chapter master.

It was a good game despite everything and a good test of the armies weakness and strengths.  Drop army with meltas is scary to a parking lot, but it was good to test it out.  I def need to be careful with my troops as I only have a few and even with carapace they are fragile.  The Bastion prob is a keeper and I want to play a few more games to see how this ends up working.

I will have some Kill team bat reps up soon, I got a few in as well on Sunday.  I got my ass handed to me and my dice completely abandoned me, I killed one guy my first game :(.  It happens and def sucks when it does though.  I was a sad panda.  But I know I can roll a shit ton of  2s!  That being said, harker squad is a pretty good choice for kill team, you just have to play them well.

Anyways that was my weekend.  Hope all of you had a good one.  It was fun to play with something different and play with my mech.  I really hope my dice get better, as I can't bear to have such horrible rolls again.