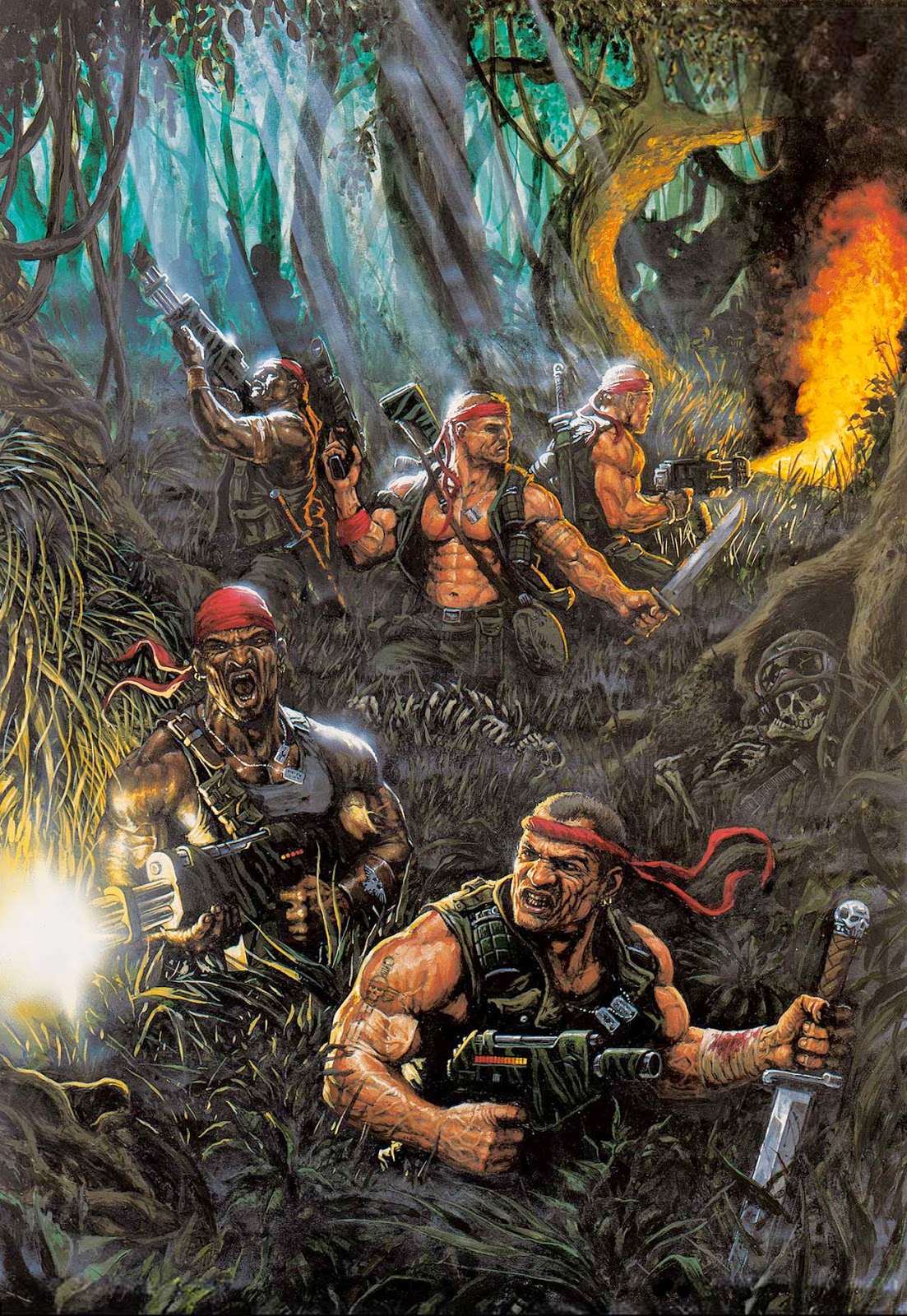 In 40k board control is a large factor in winning games, being able to control where you want to go, and stopping your opponent from moving where he wants to.  There are a couple of ways to do this and units that will help you out in this regard.  You want to use units that have some mobility or toughness and enough of a kick to be effective.  Generally these are not going to be your key units, often they are more of the sacrificial type.  Using units to screen or block will help you to control the board and the tempo of the game.

So screening units, what are those? These are units that are able to cover a portion of the board and disrupt your opponent.  They work simliarly to blocking units but not quite the same.  A screening unit doesn't necessarily have to be in the blocking position to effectively screen, it just has to be able to get there or shoot there when needed and be enough of a threat to change your opponents plan.

A conscript squad with a priest or commissar is a good example of this, NOTE it can also be used as a blocking unit.  There large size means they can be placed in a area that covers a large portion and can threaten units coming through.  Having fearless or nearly so will mean that anyone attempting to move through that corridor will have to deal with them or worry about being tarpitted.  They also can shoot enough lasgun shots to cause enough damage to infantry units to be an overall threat, or at least an annoyance.

Sentinels are another good screening unit, while not being too hard to remove, your opponent will have to dedicate shooting at them to remove them, generally more than what they are worth.  They shoot well enough and can slow units down in assault that they can't be ignored.  Positioning them in good terrain for cover and to control an area is good.  They can help provide a disruption on the flank or in a limited maneuver corridor.

Even rough riders can be useful in this role, as they can move fast and hit hard, providing enough of a threat to require dealing with.  A few mounted squads of vets or scions can work in this role as well.  Think of screening units as skirmishers, they aren't meant to hold the line or form a large block, but can engage and cause enough of a fuss to force your opponents hand.  Good screening units buy you a turn or maybe two, which is their main difference from blocking units which buy you as much time as you can get.

Now blocking units and tactics is meant to shut an area down as much as possible and force your opponent to go a different route.  Conscripts are again a great unit in this role as well.  A max or large squad with leadership support will hold an area down against a lot of targets and force units to go around or dedicate serious firepower or cc against them.  Positioned on a flank that you want to hold at all costs they can do great, and with a little support wonderful.

Bullgryns are another unit that does really well at this.  Though they are expensive, they are tough to remove with all their wounds and if in base to base pairs will have a 3+ armor save, and hopefully cover if the terrain is favorable.  If you can give them FnP too, easily had from blood angels, they become even tougher and with a IG priest they will not be going anywhere and even better in CC.

Leman russes can work as blocking units, if used carefully.  They don't have cc survivability but with their heavy front and side armor they can lock down an area and hold it with some support from cheap infantry squads to protect them from fast CC units.  Armored sentinels can work ok here, as they have better CC survivability but less overall, they work better hiding initially and then moving into blocking positions as the game goes on.

Another way to block is to throw cheaper vehicles into a spot that you don't want your opponent to move through, but are ok losing them.  Since the chances of them being wrecks are high vs exploding, their wrecks will block movement through that area.

Whats always important to consider about either of these is that it is more about the role you use them in and less about the unit.  Their job is generally terrain tied and not damage output tied.  Essentially you are using them to provide movement and board control, not destroying units as their main focus.  So think less about how much damage they can do and more on how they can help you control the flow of movement during the game.  A unit can buy you an extra turn on a flank, or block the enemy from coming through an area and coming through another that you have more fire support at.

I hope this helps, sorry for no drawings or pictures, didn't have enough time to do them up.