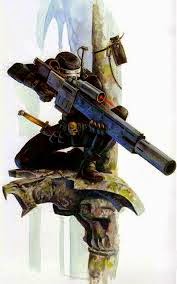 In a mistake by GW, the GK codex was released in the digital version of the space wolves.  The army builder had the GK unit options instead of SWs, so its pretty clear that these guys are coming soon.  With that some more rumors have come out that have made me excited.

First the Gk codex is being pared down to just the Knights.  Good.  I never really like the 5th book in how it was GKs, but also Inquisition.  We already have the INQ book if you want to take some inquisitors, so naturally it makes sense to drop them and instead focus on the sliver guys and make them better in their own sense.

Along with this, assassins are looking to get their own book, probably similar to INQ, and being dropped from the GK book.  This is Awesome!  I love assassins but never wanted to have to pay the GK tax to get them or Coteaz tax.  Now I can finally get the guys I want, without having to shoehorn other units in just because.

Honestly I could care less about the GK release, they aren't my cup of tea.  But assassins is another story.  I am so looking forward to my Xenos hunter task force, with MT Scions, an Inquisitor, and some assassins.  Plus getting access to one of the few useful snipers in the game will be amazing.

Some will complain about losing assassins, but they were never the domain of the GKs only, and having their own mini dex makes more fluff sense and is fairer for other imperial armies that just want an assassin but not the Gks, and still leaves a GK player the option of taking them if they really want one (not that I saw a whole lot of them).

Oh I can't wait, now if only a deathwatch supplement would come out!

GG
Posted by Grumpy Guardsman at 10:59 AM