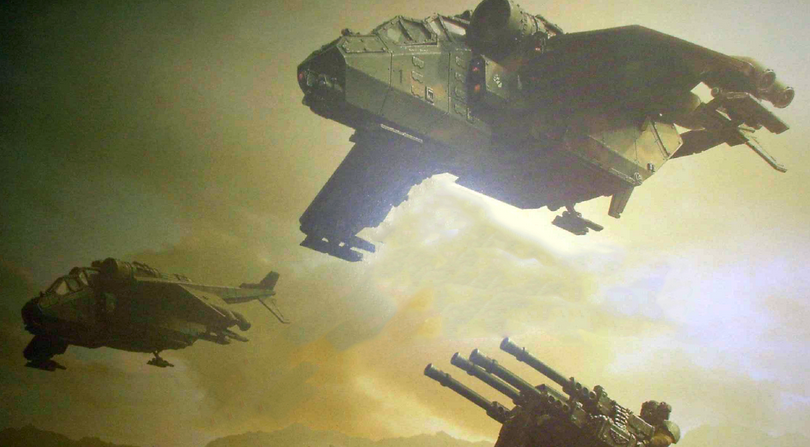 To pick up where I left off a while ago, I will be finishing up the Fast Attack section of the imperial guard.  The Valkyries and Vendettas are similar but have key differences in their role.  With the latest codex, they have been rebalanced in my opinion to where one is just not so much better than the other that there is no reason to take it.  Now they are fairly balanced, with both being good but having enough downsides that they are not auto take.

As before, they are both squadrons, where you start off with one and can have two more for up to three total in a squadron.  If you spent your entire FA section, you can have 9 flyers.  Fun for a themed list, but not the most balanced and has enough hard counters that it would struggle in a TAC environment.

The Valk is more expensive base at 125, but its upgrades got cheaper, so with MRPs it is only 5 pts more than the previous versions standard load out.  Let me be clear, there is no reason to keep the missiles.  They are ordnance meaning that you can only "effectively" fire one at BS3, with one shot weapons a 50/50 chance to hit really is not that great.  Honestly I wish they had HK missiles instead as the ordnance rule on the valk makes this a weapon you really can't take advantage of this.  If you are taking Valks, spend the ten points on MRPs for two large blasts that you can fire every turn with no real down sides.

The valk base has a Multi Laser and two hell strike missiles, which you'll be replacing with MRPs for 10pts (20pts cheaper than before).  The lascannon upgrade is 5 cheaper, so you can replace the ML for some anti tank.  Its really only worth it if you are taking large numbers of valks.  In a squadron of 3, this can work out ok, but for me the ML is high enough S to still hurt a lot of flyers, as there are more than a few at lower AV than 12.  The heavy bolter sponsons are 10pts more than before for some reason, so not an auto upgrade like the MRPs, but still worth considering.

The valkyrie is good at killing infantry and being able to carry 12 models, with no restrictions to Ogyrns riding in them now, they work well with a tank hunting vet squad inside.  The vets drop out and the valk lays fire into infantry to support the vets.  Its a good combo that works well.  Scions also love valks, but they like vendettas too, so it depends if you like large or small squads of scions.  Their move through cover means they won't take dangerous terrain tests when they jump out.

Its important to note that they both have extra armor, which does help them out on the damage table, as immobilized results can make you fall out of the sky sometimes but most times they are down graded to stunned result, which extra armor downgrades to a shaken.  This is important as it keeps your flyers moving in the direction that you want.

For me Valks are great in pairs, I like two in a squadron as they can put out a lot of fire on an infantry unit and the sheer number of wounds will still bring down marines and MEQs.  They can deal with light vehicles with their multi lasers as well, so in a pinch they can help out in that regard.  Their best use is as a supporting unit to infantry squads inside, for me I like scion squads or Anti tank vets, they supplement each other well and can hit hard and support each other.  Another thing to note is to not be afraid of going into hover, if its more important that the melta guns get into range to kill the vehicle you are targeting or squad/mc, then drop them into hover so they can disembark.   The valks may die, but they can still jink and with AV12, they are decently survivable.  Its important to not get too caught up trying to keep a unit alive if it really isn't going to help you win the game.

On to vendettas.  There was certainly some controversy when people saw the changes to them. I for one like the changes, as before it was way too cheap for what you got.  The big changes to before is that it has half the transport capacity, now at 6, and is 40pts more.  At its current state, it is pretty well balanced, as you get 3 twin linked lascannons and can still carry units inside of it.  It is still one of the best anti air units in the game, but is now a significant cost to spam them thankfully.  If you start to bring them in large numbers, you will start facing a problem of a lot of points going into one unit that you can spend on other things that will give you AT, but at a cheaper cost.

Otherwise the vendetta is exactly the same profile wise to the valk.  It can take heavy bolter sponsons too and for some odd reason can replace two of its TL lascannons with hellfury missiles, which as S4 AP5 large blast ignores cover one shot missiles.  Why can't Valks take these!?  Really these make no sense on a vendetta, its a tank hunter, so your going to lose that effectiveness for two one shot missiles that are ok against infantry.  On the valk, this would be a good cheap choice if you didn't want to spend too much on upgrades, but really on the vendetta it is pretty bad.  Anti infantry fire is not something the IG struggles with, so there is no reason to really take this upgrade, as the vendetta is expensive enough, you really don't want to limit its shooting capability.

Use wise, I still like them in pairs, it really ups their chances of killing what they are shooting at.  One is still effective though, so don't be too worried if you want to spend the points elsewhere.  They work great hunting tanks and flyers, using their speed to get into position for side shots.

Also they are still a good taxi, though will be limited to small units.  Here though Scions are a great choice, as you can take a scion command squad or a 6 man scion squad in one with special weapons to fit your need.  Another good option is a special weapon squad with demo charges.  These make for a great surprise in your enemies back field, having them jump out and drop three charges on them and hitting a unit hard.  This is trickier to pull off, as they are much more vulnerable to dangerous terrain tests, which scions auto pass, so its a bit of a risk to pull off, and if they scatter out of range, then they will probably die having done nothing.  So its important to weigh the risk of dropping into hover to get them on target.  If most of your opponents flyers/heavy tanks are dead, but their is a larg unit of 2+ like terminators, it is worth going into hover to drop the demos off to kill that unit.  Its all about target priority and killing the unit that is most likely to keep you from winning.

Overall though, vendettas are pretty straight forward, you fly around and shoot tanks and flyers that need to die.  They are ok against small units of low armor saves, so small units of termies will feel their punch as killing two of a five man squad hurts them quite a bit.

Both are really good units and should be considered.  Each fills different roles and has advantages.  The valk is a great transport and can do a lot to infantry.  The vendetta is great for hunting tanks and flyers.  Its up to you on which helps your army out the most and what holes you need to fill.  In either case, they will pull their weight.