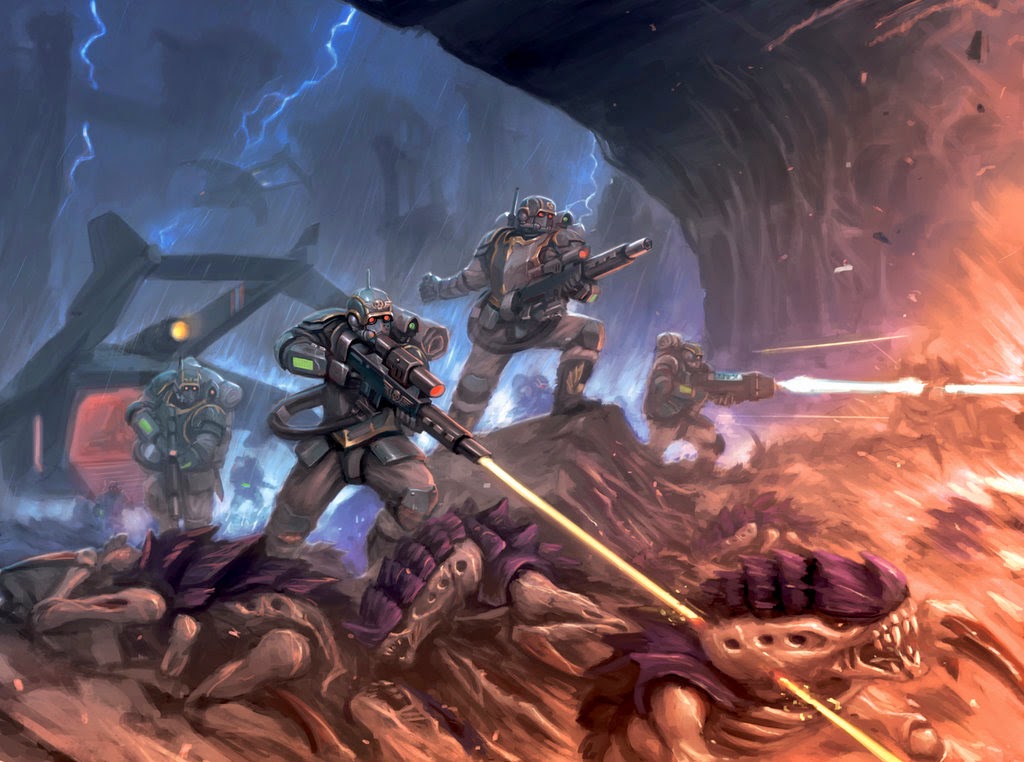 Alright so back to some Militarum Tempestus tactics finally.  As well all know the big bad boys in the room are Eldar right now, and really this is prob going to be the case for a while, even if the baron from DE is gone, the eldar don't need him to be good, they just lose one good army style.  So with that, you are going to need to know how to fight them with your scions.  I'll assume at first that your army is pure scion, and at the end talk about some ally assistance.  Luckily this is not the worst matchup for scions, as they have a decent number of tools to deal with eldar, and actually have a harder time against horde armies.


Really there are two big things that you have to deal with eldar in order to really beat them.  That is wave serpents and wraithknights.  These two are their toughest units and will have to be dealt with in order to reign them in.  Luckily wraith knights can be dealt with without too much trouble if played right.  Waveserpents are doable as you have tools that can deal with them, but are unfortunately vulnerable to them as well.

The eldar army is mobile, that is the real core of it.  Very few units cannot be moving large distances a turn, even the infantry with battle focus.  So how to deal with it?  Well the scion army is mobile as well, as long as you have the tools.  Tauroxes are critical, as well as valkyries.  This gives you ground and air mobility to keep you moving to hit the eldar where you want to.  Tauroxes can move quite fast and still keep fire going.  Added to this is deepstriking squads that can hit close and get in the waveserpents rear.  In short, ou have the tools to deal with eldar mobility, you have to use them right.

Tauroxes help a lot against wave serpents because of their long range shooting, with either Taurox battle cannons and autcannons or missile launchers and autocannons.  I do not recommend taking the volley gun on tauroxes except for the gatling variant.  Its simply for utility, the autcannons help tremendously in dealing with scions long range issues and dealing with vehicles and tougher targets over a distance.  With the mass of S7/8 shooting, you can deal with wave serpents quite well, and forcing them to jink is a good thing.  The reason is that while tauroxes are good at killing serpents, serpents are good at killing tauroxes.  Mainly their serpent broke shield of emergency every time.  tauroxes love cover, and need to be in them early on, and the serpent shield doesn't care about cover, so reducing the effectiveness of the return fire is critical.  The scatter lasers are good, but you can get cover saves which minimizes their threat.  Serpent shields though will murder tauroxes.  Using massed fire at range helps tremendously to get the serpents to jink and significantly reduce their fire.  Doing this keeps the tauroxes alive and kicking longer, which you really need.

Early game tactics should really be ignoring most other threats and focusing on staying in the back field and hitting the serpents.  The other reason is that you want to draw the eldar player towards you.  Scions need to be close to really be effective with their shooting, so draw the eldar in.  Let the wraithknight jump forwards, focus on wave serpents.  If they have an eldar deathstar, unless you can shut down invisibility or their other buffs, its not worth wasting shooting on it till later.  The early game is keep away.  Stay back in cover and shoot at wave serpents.  This will be your first few turns.  If you have a way to infiltrate some scions forward this is recommended as well, focus on bringing plasma armed squads forward as you can use rending with them on wave serpents if they used their serpent shield.  Don't go too far forward though as you will run a high risk of being isolated and destroyed.

Once you have started to whittle down some of the wave serpents, and mainly once the eldar have advanced into mid field, this is when you want to spring forward.  At this point the wraithknight/s should be in range now, drop your scions squad out with command squads in range to give orders.  You want this to be your larger squads, the reason being is the sniper order.  This order wrecks wraithknights.  You'll be firing at least 7 shots with your squad from your hot shot weapons, getting 3-4 hits, and then 2ish wounds.  And thats just from the rifles.  Plasma guns then add to that, usually giving you another wound.  With two squads you actually have a very good chance of bringing down a full health wraith knight.  Ideally though you want to soften it up with missile shots from you tauroxes first to give  high chance of bringing them down.  With AP3 weapons everywhere, wraithknights hate this and die in the open quickly.  Its also a reason I like to have a rifle squad of scions with not special weapons to make best use of this order.  This is also extremely effective with the taurox ground formation.

Depending on how exactly your army is built you should have deepstrikers, valkyries, or both coming in by now.  This is where you start to pick off isolated units and important ones like jet bikes and hitting hidden wave serpents in the rear.  Valkyries can help with multilaser shots at wave serpents, or use multiple rocket pods on infantry.  In either case they add utility.  If you have played things right, you should only have moderate losses and still have about half your tauroxes left and minimal infantry losses.  But at this point the wraithknights should be dead or close too it and the wave serpent force should be significantly depleted or isolated.  Cover should still be your best friend and tauroxes need to be moving from cover to cover and staying out of the open.

The fight won't be over, but if done right the eldar force should be strung out with squads in the back and middle from wrecked serpents and other units.  This is where its time to start massing your forces.  Use the tauroxes, valkyries, and deep striking units if left to hit a part of the eldar force and isolate and destroy it.  Then mount back up and move on to the next.  Keep an eye out for jetbikes as a priority to kill, their ability to move has to be taken into account.  At this point its about controlling objectives and minimizing his ability to take the important ones.  Keep as much of his force bottled up and deal with the most mobile and threatening units.

If you do all of this, you will have a good chance of winning. The fundamentals are stay in cover at range early and focus on wave serpents and drawing him into the midfield.  Once the wraithknights and other units are in the killzone, move up to deal with them with tauroxes and infantry.  Use valks or deepstrikers to isolate and draw other forces away, spread their force out and start hitting it piece by piece.  If you are going second, hide as much as possible to stay away from serpent shields, if going first try and get as many as possible to jink.

There are some things that will help scions out a lot and one is fortifications.  The firestorm redoubt is prob the best here.  Its large for units to hid behind and with magos machine spirit it can spit out a lot of lascannon fire to deal with flyers and skimmers.  At 230 this is a good thing to bring and gives a solid long range firebase to shoot from and with 14 armor gives you some strength where most of your stuff is not that heavy.  Other fortifications aren't bad, but this really gives the most utility to the army.

Now if you are looking at allies, there are some strong contenders that will help out in general.  Regular IG is a great choice, and what you are really looking to bring is the heavy long range stuff.  A leman russ squadron, prob no more than two, is great and personally I would take the exterminators with lascannons for solid all round punch.  Another option is hydras, though not necessarily must take, another is wyverns which are amazing help to scions.  For Hqs, the tank commander is prob the best choice, as single vet squad as troops prob mounted, then the fast and heavies, with a vendetta or hellhounds being good here, and then heavies for additional leman russe or wyverns or manticores.

Other good ally options are obviously knights, with really any way you want to go with this.  The adamantium lance is great with them, or even just a single knight.  Really bring what you want here, knights work really well with scions.  Space marines are another good ally, bringing bikes and other tough units in to help take the brunt.  If you start going away from fluffyness, armies that you can ally that help out are Tau, eldar, and even dark eldar.  If you are looking for ally help, there are a lot out there to help the scions out.

Eldar is a tough army to face, but they are beatable.  Play smart early and target priority is critical.  Don't bite off more than you can chew early, focus your fire to get the maximum effect.  Hope this helps and gives you a good idea of how to deal with eldar.