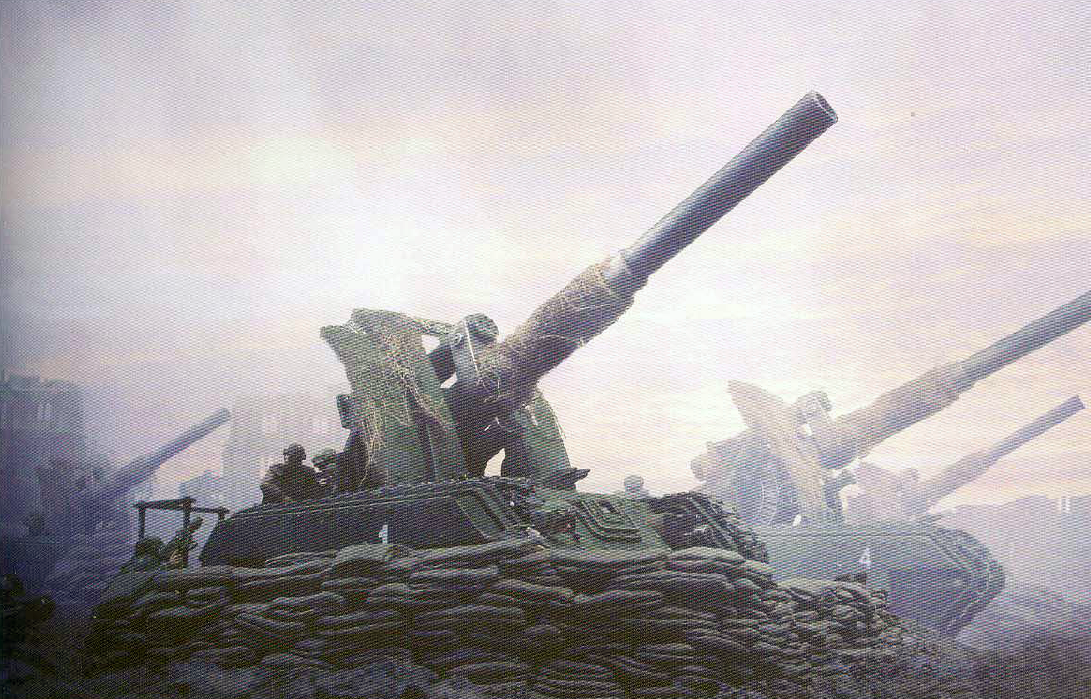 Next up on heavy support is the basilisk.  Its the humble ole mainstay of the Imperial Guard.  Unfortunately it has some issues that make it not the premier choice for your army.  Most of this is how artillery works in 7th edition, with the major change to minimum range.  Its still not a bad option, but there is more you have to be aware of it you want to use it.

So its the basic Chimera chassis with AV 12 front armor and 10 on side and rear.  It has 3 Hps, is BS 3 and is opened topped like most of the artillery.  It is 125pts and comes with usual vehicle equipment (smoke, searchlight) and a hull heavy bolter (or heavy flamer).  You can have 3 in a squadron and its main gun is the earthshaker cannon.  Its 36"-240" range S9 AP3, large blast, ordnance, barrage.  Its solid don't get me wrong.

Its issue is how barrage interacts with minimum range.  Basically you cannot target a unit within that minimum range with a barrage weapon if you cannot see it.  This is a big change from 6th, where you could, but would scatter fully if you saw the target or not.  The minimum range hurts other barrage weapons less because they either do not have it or its small.  But 36" is a hug bubble of stuff you can't hit, go ahead and place it in a corner and get a measuring tape out and see how much this covers, it isn't small.  You can fire directly, but will need line of sight in order to do so, so this affects how you can use them.  The big thing is that it is hard to keep them hidden and still fire.

How to take them, really I would keep them pretty basic, they are not really worth adding a lot of pts too.  A heavy flamer is good for when the enemy gets too close and the main gun can't be used.  Other than that I would take one to two, as the game goes on it gets harder to hit things.   You don't want to tie too many points into them.

You want to find a good corner with good cover and start banging away with them.  A full squadron of them can really hurt an advance of either infantry or vehicles, but they will be unable to explode any vehicle except opened topped ones.  They are best used against masses of infantry or light vehicles to get the most out of their large blasts.

Now if you are facing an aggressive army, you will have issues hitting targets in minimum range, that's why I recommend the heavy flamer.  Once they get close you can use the basilisks as expendable units to move up and flame targets.  This also works well against flanking units trying to get behind and hit your artillery in CC. The hard part about them really is that you will have to keep them visible to keep shooting their main guns, but they are relatively easy to kill.  If you can find good terrain that will give you cover and allow you to shoot through, that is the best.

Honestly there are better choices for IG artillery, and I prob will not use them a whole lot.  I like the manticore better and the wvyern is superior for dealing with infantry.  The basilisk is just ok, and when you have choices that are great, its hard to take the ok one.  If the way minimum range worked in 7th was different, then it would be completely different, but as is you will struggle to hit targets later in the game unless you are playing against a gunline or keep them visible in order to shoot directly.  So if you are taking them, plan accordingly and use them to maximum effect early.  They hit hard and are great as long as your opponent does not close with you.  Once they get in though, they will struggle.  Honestly for larger games like Apoc, they are a great unit as their long range can actually be utilized, but in most games they don't get to take advantage of it.  Hey you can shoot at the table over if the guys playing there are ok with it :).