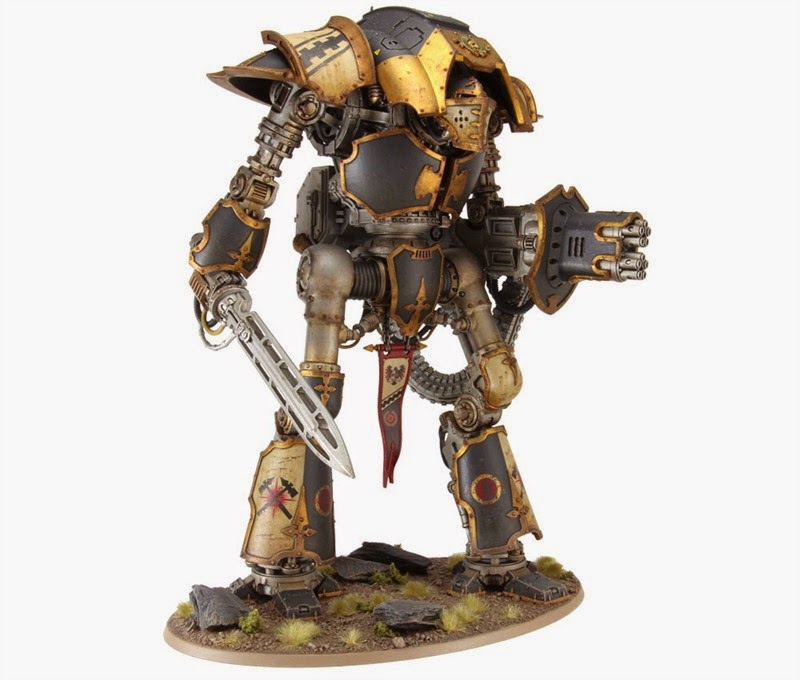 Well Forgeworld is at it again and we have another beautiful model to ogle.  The Knight Castigator, its another of the larger knights, about the same size as the lancer.  Profile wise its a knight, its got an ion shield and has the same flank speed rule that the lancer has.  Really though this is the knight that I want and will be looking at how to field it.  It also can be a lord of war so it makes for some good options for certain armies, especially Militarum Tempestus.

So you get the knight profile with an additional attack.  WS BS 4, I 4 A4, 13 12 12 armor, S 10. We are all familiar with the knight now.  It can run 3d6 which is nice bonuses for getting through terrain that is in the way.  Its big difference is its weapons. It has a castigator bolt cannon which is 36" S7 AP3 Heavy 8, which is also twin linked.  This is an awesome gun and you have a knight that can actually shoot at flyers in emergency and get a decent amount of hits being twin linked.  Not dedicated AA but it can do it.  It will also mow through any light vehicles and any infantry lacking a 2+ save.  It also will do great against any 3+ save monstrous creature, and can do ok against the 2+ save ones from number of wounds.  Thats ok though it can deal with those in CC.

Its melee weapon is a big departure from other knight melee weapons as it is not a D weapon.  This is not bad though.  It has the Tempest Warblade which is S10 AP2.  It has a few special rules though that help it out.  It has Deflagrate, which allows you to make extra attacks.  After normal attacks have been resolved, the number of unsaved wounds inflict that many automatic hits on the unit/model fighting the knight.  This is nice when fighting MCs and other single multi wound models to give you extra fight.   It also has the Tempest attack which is made at initiative step two instead of normal attacks.  Every model in base to base contact with the knight suffers an automatic hit with the weapons profile.  This is great if you are fighting horde units and can get a large number of attacks that auto hit!  Won't be as useful against MCs but is great for larger units, or even units that have similar or higher WS to get the hits in.  Its useful against power fist armed termies, giving you auto hits on them and pretty highly killing them.  The last rule is sunder, which lets you reroll failed armor pen rolls.

In short its a nice combat knight that can deal with hordes and MCs alike, and it has a gun that can put out a lot of shots to help deal with most threats.  It can still stomp in melee which is technically its only D weapon.  At 380pts, its not a bad option at all, only five more than a Paladin.  For me this is a great lord or war for IG or MT.

I like it for MT more as it answers some of the issues of the Tempestus army.  It has long range shooting, it is very durable, and brings a very strong CC punch.  Also it can shoot at flyers with a reasonable hit rate.  Not amazing but with 8 TL shots, a few six's are not going to be uncommon.  I like it in that its a target, it is going to take fire away from my fragile Tauroxes, as my opponent focuses on the knight.  This gives them time to maneuver and fire.  I can play it aggressively and use the scions to cover it and keep it from getting overwhelmed.  Tauroxes can hide behind it for cover and keep up with it and protect its flanks and protect it against drop pods and other flanking units.  It really is the best knight for the Tempestus.

For normal IG, its still a great choice too, but the other knights are good as well, so it really depends what you are looking for.  Its the only knight that can reliably shoot at flyers so it is something to consider, but the paladin is just as good at dealing with horde and 3+ save units, so it depends on what you want.  The Castigator only has one weapon so if it fires it only has on target it can charge which is a slight down side.  So consider your shooting carefully if you are wanting to charge.

Now there is no way I am spending that much money on the FW version of this thing.  So the plan is getting another normal knight, prob some GK dreadknight leg bits, and dreadknight sword (already have), and a storm lord mega bolter, and there you have the weapons for the knight castigator :p.  If the leg bits work out right I can make it a little taller too to be more in line with the FW knight, but honestly I'll prob keep it close to normal knight size as thats about where I like them.  I'll figure out how to do the ammo feed and hopper on the back, but I'm sure I can find something that will work and little green stuff can do wonders as well.

And of course the best part is that the rules are free on forge world so go down load a copy and throw it in your knight codex, you have another unit in the army :p.  So this is a good addition to the knight army and makes a great ally and supplement to some armies.

GG
Posted by Grumpy Guardsman at 10:34 AM