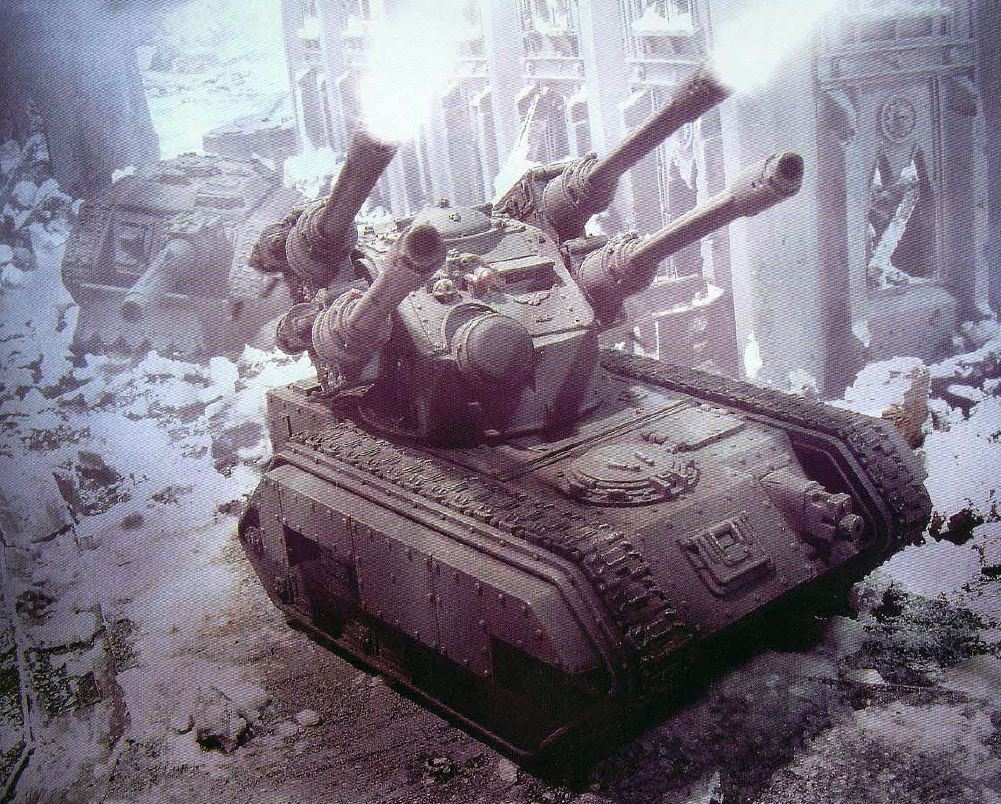 Alright, time to go over the heavy support section.  First off will be the hydra, though its not as good as its old self, with some of the changes to 7th I think it can be used well and is a viable option for AA.  Whats the big changes?  It went up 5 pts, is opened topped, and lost its auto targeting which meant flyers, skimmers, and bikes could not take a cover save against it.  Sucks, but it still is cheap and can be taken in squadrons of 3 and still has a lot of TL autocannon shots.  It has skyfire, and since interceptor no longer lets skyfire units shoot at ground targets with full BS, it doesn't lose a whole lot to the old quad gun.

At base, its 70 points, has two TL hydra autocannons which are normal autocannons with a 72" range.  It is opened topped, not as big of a deal in 7th honestly with how the damage chart works now.  It has a searchlight, smoke launchers and a heavy bolter which can be swapped for a heavy flamer for free (a good choice).  It can also take items from the IG vehicle equipment list.  So you can get rid of opened topped for 15 pts, but honestly camo netting gets you more bang for buck for the same points.  One just gets you back to normal on the damage chart, where the other gives you a better chance of not having to take that pen or glance.  I'll take the reduced damage overall versus the +1 on the chart.  Extra armor is also a good option, but not great either as moving is not always needed with the hydra.  Honestly most of the vehicle gear doesn't help the hydra too much as it can remain stationary most of the game if placed right.  Fire barrels are good as units are going to try and kill them and flankers will charge them, so it gives you some damage back if not actually saving the vehicle.  Camo netting is the best choice here.

Really they are pretty simple, they shoot down skimmers and flyers, and they are good at it.  Given that flyers are pretty common as well as skimmers, there isn't too many times where they don't find themselves useful.  I like a heavy flamer on them as they can engage targets when they get too close to charge the hydras, and the autcannons can't help you out too much.  With only a FA of 12, they are very weak to flanking attacks so its very important to protect them from flanking shots and units, either through terrain or other units.

I like hydras in pairs, and at 140pts, they can engage most flyers in the game and kill them and get their points back.  If they kill a storm raven (for two, not that hard), they have more than done their job in the pts department.  While they don't do as well against wave serpents as they used too, they are still good at bringing them down.  With the high use of serpents, its something to strongly consider along with other units.  While you can ignore cover with orders, hyrdas can still force a lot of saves against them and bring them down to where you can finish them off with other units.  Even if they kill one wave serpent, two have again almost paid for themselves.  Now I'm not a huge fan of using pts as a baseline for success as you can kill more pts worth of your opponent and lose the game, but it is a good baseline to start from when considering a units usefulness.

When compared to more fortification AA weapons, the hydra wins out in terms of cost and utility in some aspects.  A quad gun will cost you 100pts, vs 70 for a hydra.  And a hydra can move and shoot farther.  Sure the quad gun has interceptor, but with only a 48" range an opponent can get around it no matter how well you place it, I have had this happen to me multiple times.  Interceptor is only occasionally useful now, since you can't shoot at ground targets at full BS, its only effective versus oncoming skimmers and flyers which an opponent can mitigate as long as he is paying attention to ranges.  The quad gun is just not enough anymore, and it can be too easily targeted and killed.  With the greater range of hydras, they have better standoff in that they can be deployed farther back and out of range of many of the weapons that can hurt them early.

Using them is well is about proper placement in the early stages of the game.  You want cover and a good protected spot in the back field, but enough fire lanes to not limit your effective shooting.  Its important early to present more dangerous threats to an opponent that has a lot of flyers.  Give him a bad choice between trying to focus on the hydras to protect is oncoming flyers, or other units that are killing what he has on the board right now.  Realistically the hydras need to survive the first few turns to start engaging the flyers, so the initial game needs to be one of minimizing threats to them through placement.  This is where it can sometimes be good to deploy out of line of sight early to protect against those threats so you can move out when the flyers come in.  If you are going first, then the first turn your hrydas can engage flyers is turn three, so consider that in using the hydras.  Is it worth exposing them early to deal with current threats on the board, or keep the protected for later threats.  In the case of eldar wave serpents, it is absolutely worth it to keep them out and fighting, as the eldar flyers will do far less damage over the game than wave serpents will.  Its something to always consider when using them.

Overall they are a solid if not great unit. They are one of your cheapest AA options and provide help against skimmers, most notably wave serpents.  Personally two work well and are cheap for the amount of fire they can put out against flyers and skimmers.  They are mobile and have long range which helps them out quite a bit.  If you are having trouble dealing with flyers, they are something to seriously consider.

GG
Posted by Grumpy Guardsman at 11:51 AM