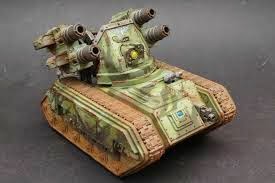 Next up it is time for the Wyvern.  This definitely one of the best new units in the codex hands down and has been an mvp in many games.  I have to say I remember when the info for it was first leaked and everyone was crapping on it, saying that S4 sucked and it wouldn't be good.  Well how about that, now its a staple in many an imperial guard list.  Yeah its really good.

To start off its the basic artillery chassis, with AV 12 10 10, 3 HPs, BS 3.  It has a searchlight and smoke.  Its opened topped.  It comes with a heavy bolter and heavy flamer can be swapped for free.  Same old stuff, nothing special here. The kicker though is its price, only 65 pts per, and you can have 3 in a squadron.

What makes them truly great though is their weapon, two storm shard mortars. They have a 48" range, are twin linked, S4 AP6, barrage, ignores cover, and shred.  Oh and each fires two small blasts, for a total of 4 per wyvern.  The great thing is that it doesn't have a minimum range, so no issues with hitting things in or out of line of sight.

For 130 pts you have two wyverns that can put out 8 small blasts that ignore cover and reroll to wd.  Granted its not going to do much to vehicles, but oh well, thats not what it is there for.  What it excels at is mowing down infantry.  Even heavy infantry will struggle with the sheer number of wounds they will be having to save.  Really the best part about the wyvern is that it doesn't need any support, it is buffed up already so you don't have to worry about using abilities to buff it up.  Its fire and forget.

Now you can have some issues with it against a smart opponent.  48" is a good range, but not enough that our opponent can't stay out of its threat range.  Be smart with your deployment to give it a good range, but don't put it out too far that it is too exposed.  Don't be afraid to move it if you need too.  If targets are out of range, you can still move 6" and fire one of the mortars, or move farther to get good range.

What you do not want is the wyvern to sit out half the game with nothing in range.  So pay attention to the army you are fighting and the terrain to make sure you get it in action early.  Try not to expose it too early as they can be destroyed with concentrated fire.

Wyverns work best against medium to light infantry units that are dug into cover, or in the open.  Target larger squads if available.  Conscripts, blobs, ork mobs, cultists, crusader squads, fire warriors, eldar guardians etc.  Light troops will be swept away by the wyvern.  Medium troops are still a great target as well, being twin linked you will still have a high probability of getting close with the first shot, which is what matters the most. Even marines and MEQs will be vulnerable from the amount of saves they can have to make from the wyvern.

The wyvern really is the answer for troops dug into cover though, and it should be used to sweep troops dug in on objectives in cover.  Use it to support your advancing infantry or vehicles and clear the area of infantry.

Another thing you can do is use techpriests to use PoTMS on them to split your fire.  This works best with two wyverns with two techpriests.  You fire two at one target and two at another, still giving 4 blasts per unit hit.  Its a great way to thin out multiple advancing targets especially when you risk overkill by firing both wyverns at the same target.

One of the hardest parts of using it is keeping it alive. It is a high threat against most armies, and as such it will be targeted.  Use terrain and other units to protect it.  However don't let your opponent dictate to you.  If you stick it in a corner and doesn't fire most of the game, then it may as well never shown up in the first place.  Have some tactical patience though, if you need to wait a turn to draw your opponent in, that is ok as well.  The goal though is to not have the wyvern sitting silent.

Overall it is an amazing unit, it just kills infantry and can even hurt some MCs, though its not great at it, it can work in a pinch.  Its super cheap and works extremely well.  I like them in pairs, as three can be overkill and two can usually kill most if not all of what they are targeting.  A pair can sit in good position and affect the game by forcing your opponent to draw his troops into other kill zones.  I just love them and they are one of the best choices available to your army for dealing with troops.