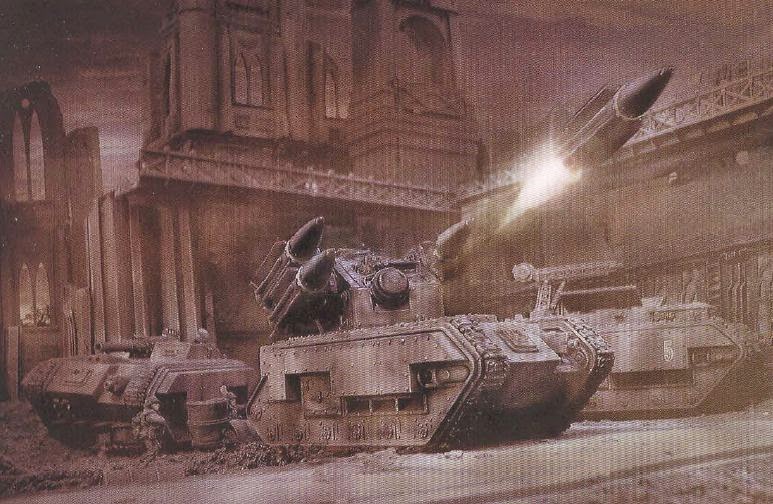 Next on the list is the Manticore, one of my favorites!  Really it hasn't changed from the old codex to the new rules wise, only real change is a 10pt increase.  This thing is there to sit back and blow the crap out of your enemy and it does it very well.  The new codex also brings some new synergies with it that can be used to make it even more effective.

So its the same basic chimera profile, unlike the other artillery though it is not opened topped.  BS 3 AV 12 10 10 3 HPS etc.  Nothing special to write home about.  Like the others it can replace its heavy bolter for free with a heavy flamer, not a bad choice again for when guys get too close.  Its main weapon is it's storm eagle rockets, its unique in that it only has 4 and they are one use only, so it has four shots for the game.  This isn't a bad thing as it may move a turn and honestly its going to be a priority target so it will most likely die before it last round is fired or just after it.  So don't worry too much about the limited ammo, it makes up for it.

The storm eagle rockets have a range of 24"-240" S 10 AP 4, and it is ordnance D3, large blast barrage.  Each time you fire, roll a D3/6, on a 1-2 its 1 large blast, 3-4 its 2, and 5-6 its 3.  One shot can potentially put out a lot of fire power and this is really the strength of the manticore.  The manticore does have a disadvantage in that it cannot fire directly, so you can't hit anything within 24", but I have rarely found this to be too much of an issue with proper placement.  24" is much more manageble and you will still have targets that are outside of the bubble.  Key is proper placement at the beginning of the game and having units buffer it to keep them out of that bubble.

It cannot be squadroned, so you can't really spam it which is a good thing, as even three can put out a punishing amount of fire.  Like the other artillery, most of the vehicle equipment is not really worth taking, with prob the best choice being camo netting, or fire barrels.  Really this guy is fine bare bones, with a heavy flamer being a good choice for when you have flankers coming in.

How I like to use it is behind a good piece of terrain, in a good corner or in the back, to give it good protection and threat range.  Have a few units to bubble wrap it against deep strikers and flankers.  Its important to get good cover for it to keep it alive and out of LoS is great for this.  Target priority is large infantry squads and massed vehicles.  When you get 3 large blasts and put it on a group of rhinos, it can do quite a bit of damage as long as scatter isn't to mean to you.  Prescience can be a good option to use to make sure your accuracy is high.  It sucks when one of your precious missiles goes off and kills a hill.

One thing you can do with the new guard book is to use techpriests to get some extra fire out of your manticores for a powerful alpha strike.  What you do is take three techpriests, and three manticores.  The techpriests use their PoMS on each manticore so you can fire 6 storm eagle rockets at once (2 per) and importantly at different targets.  Note that you roll the D3 for each rocket fired, not once for each manticore.  This can be a potential of 18 large blasts in a single round of shooting, not that this is likely :p.  Only issue with this is that it is a lot of points to sink in to this for really only two rounds of shooting.  Its all or nothing, it either is really successful or a complete failure and then you have three manticores sitting around with their hands in their pockets whistling.  This only works for some of the forgeworld variant manticores not the standard one, based on how the rules for storm eagle rockets are written.

The real key to using manticores is target priority and getting the most use out of each rocket.  S10 is great against vehicles, but it doesn't have an AP bonus on the pen chart, so only opened topped vehicles can be possibly exploded by it.  Low AV vehicles are still a good target though as it has a very high chance of doing damage, and with multiple blasts you can get overlap to put a lot of hull point damage on vehicles that are packed together.  Really though this excells at killing infantry and is great for killing T5 multiwound models.  Ork nobs, space marine bike characters, anything that has multiple wds and is T5 or lower will hate this thing.  Large packs of medium infantry will be swept away.

It is a great piece of artillery and can be used to take care of just about any threat and should be considered in just about any imperial guard list.  I love it and use it often and it rarely has let me down.  Hope this helps.