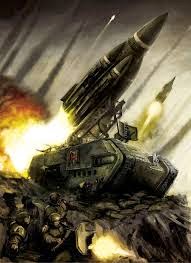 Ah and now the doomsday weapon, the Deathstrike!  Last edition it honestly was meh, mainly because it was too easy to keep from firing.  Thankfully there have been some changes to how it fires to make it much more reliable.  It also get a more reliable blast as well.  Overall it is much better than before and can give a killing blow to an opponent when done right.

Overall it stayed the same, its still 160, which is about right for what you get.  It is AV 12 12 10, which is really nice to have side armor 12 thrown in there and add a lot to survivability.  Otherwise its normal guard vehicle stats.  It has heavy bolter which can be swapped out for free with a heavy flamer.  It has smoke and a searchlight.  This is one that I would keep the heavy bolter on and prob pick up a heavy stubber or storm bolter, as once its shot is fired, having some guns on it so it can still do something is useful.

On to the important bits.  Its main weapon is the death strike missile which is 12"-unlimited range, so no issue there lol.  S 10 AP 1 ordnance, apocalyptic blast, barrage, ignores cover, one use.  In short its pretty awesome.  Only one shot but it hits like a freight train.  As long as you aren't targeting units with good invul saves, this will wipe things from the board.  How it fires is not as complicated as it seems.  It cannot fire the first turn, or in a turn in which it moved.  Starting turn 2 you roll a D6 and need a 4 to fire it, with modifiers.  +1 for every consecutive turn it has not moved, and -1 for each weapon destroyed result.  The No Ordinary Weapon special rule means that the missile can never be destroyed and a crew shaken or stunned will not prevent it from firing.  Awesome!  It also will always fire on a 6 no matter the modifiers.

This is so much better.  It used to need a 6 to fire at all, and crew shaken and stunned used to count against it.  Now it is so much more forgiving and has a larger blast to boot! Honestly its a much better weapon than before and having used apocalyptic blasts before, they can be devastating.

So how to use them?  Well its pretty darn simple, keep them hidden away.  Now you want to get the most bang for buck, so if your opponent is reserving a lot of his forces, wait the bastard out.  Otherwise target the largest concentration of troops and vehicles and let it go.  Prescience is strongly recommended, you do not want this thing to miss or go off target, this is one shot and needs to count.

Infantry should be focused over vehicles, as long as they are T5 and below unless the T6+ only have one wound.  Avoid good invul save units, you want to get the most use out of it and not give them a chance.  This will simply wipe large portions of your opponents troops off the board.

Vehicles are still a great target though and it depends on who you are fighting.  This is amazing against wave serpents, especially if they have already shot their shield.  Hit a large group of them and watch them die.  The main reason that infantry are better targets though is that you have a higher chance of killing them.  Most times you just need to wound on a 1.  Vehicles though you need to pen, and then roll 5-6 most times, so you have less chances of getting that kill.  Still though your target priority is going to change by game.

Main goal is to hit as much as possible and get as much damage done with that one shot.  Defending the deathstrike is really key.  Anyone who has suffered one will never forget it.  Build standoff and protect it so you can get its shot off.  A smart opponent will try to splinter his army off, and fast armies will be good at spreading out to avoid all the casualties, but you can still get a solid kill.  Mob armies will hate this weapon for good reason.

This is honestly still a good choice, for the simple fun of lighting your opponents army on fire.  It hits really hard, and is not that expensive honestly.  If you are looking for a solid punch that can hit anywhere, this is not a bad choice and it will wipe portions of the board away.  I have not used one in while, but I look forward to doing so in the future.  It is definitely something to consider if you are looking for a big gun.

GG
Posted by Grumpy Guardsman at 9:59 AM