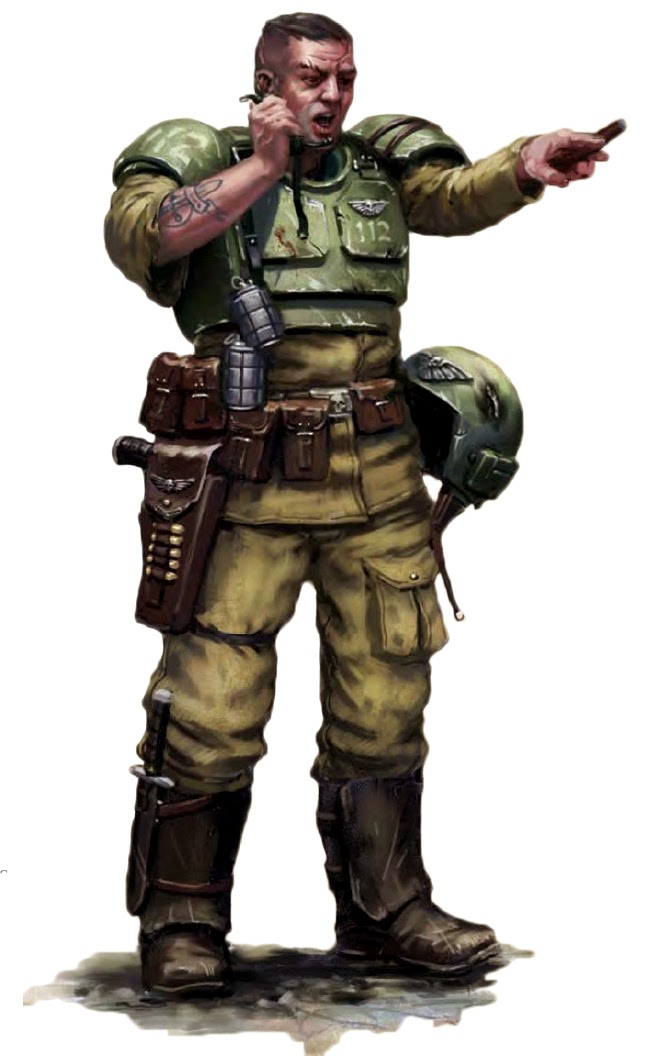 The Master of Ordnance is still a controversial unit for guard players, but many like myself like him and find great use out of him and with the new changes he is better than ever.  When I first started using him he was very hit or miss, but as noted in v1 of this article, he has become an old warhorse in my armies.  What you get now for 10 points cheaper than before is a S9 AP3 barrage with unlimited range.  That is the first thing that is nice about him, anywhere on the board can be hit, line of sight or no.  Now where he comes into the down side is that he scatters, alot.  If a hit is rolled, he still scatters that distance, if an arrow you roll another D6, for a 3D6 scatter and with only BS4 that is hard to counter that potential for large scatter.  But with changes in the codex and with some allies, there are ways to make him more effective and lets be honest, your getting a basilisk for 20 pts, you really can't go wrong with that.


Now one great way to use the MoO is in pairs, the "downside" being you have to take two company command squads.  This IMO is not a bad thing, and at 20 pts you can easily take two without losing a huge portion of your army.  This actually opens your army up more, as you no longer need to take basilisks for your heavy pie plates.  And the other advantage is that MoO can be affected by orders and now psykers with prescience everywhere.  Now some may not like placing your trust in these guys, but in general if they are not targeted directly, they will survive much longer than most basilisks or other heavy hitters.  He can be hidden and with other targets in your command squad, others will often take the brunt of fire before he does.  When you are dropping a minimum of two pie plates a turn, its hard to miss and not see those affects.  It also maximizes the number of orders you have to use because of the extra command squad.  Now this works well with infantry heavy lists, but I would not recommend going double if you are going armor heavy or plan on moving around a lot, though with some of the new warlord traits you can minimize this if you get it.  If going armor heavy, the tank commander is a great choice, but having a second command squad as your second HQ choice is a great option and adds flexibility and a lot of force multipliers.

To get the most out of him and have a master of ordnance and not a master of misses, you have to do a couple of things.   One is to use him with line of sight as much as possible, and Two, take advantage of orders and prescience to increase his chances of either hitting or wounding.  The first seems pretty simple, but it can be easy to fall into the habit of using him against models out of line of sight, but this removes one of the things you need for him to be effective: Line of Sight to reduce scatter with BS.  Now orders are great now with no longer requiring line of sight on the target you wish to hurt, they just affect the ordered unit.  The old bring is down is different, but do not underestimate the importance tank hunters can bring on him, monster hunters not so much as you are only going to take one wound off, so focus on tanks and MCs with other weapons.  Now a great new order that has been added is the split fire one.  This is great on a command squad with different weapons, you use your last order for your commander (or a PCS now!) and the other weapons shoot at a near target with their weapons and he shoots at another.  No longer do you have to worry about having supporting weapon loadouts when bringing the MoO, you can load up on plasma guns, and split fire them to take out multiple targets.  And prescience on that squad doesn't hurt.  So you are rerolling misses with your squads guns and the MoO.  Having large access to prescience is much better than the old bring it down order and lets you spread twin linked love all over the place.  Fire on my target can be another good order to use, if your opponent has a unit in area terrain or ruins (on top level) or vehicles with jink, this is a great order to use.  This will also be brutally effective against bikers of all types but SM bikers will feel the hurt much more with their high pts cost.

Now allies bring something else to the table that really helps the MoO especially.  The big one I am talking about is inquisitors and really its the servo skulls that they bring that make it work.  Blasts with 12" scatter one D6 less than normal.  This is amazing for the MoO especially.  When taking servo skulls you want as many as you can, preferably 5-6.  So that means two inquisitors (oh darn).  Now with the new codex, allies are really not needed and this means that a prescience inquisitor really is not needed, you just want the skulls.  Now it does not hurt to add prescience to him/them, but its not needed now and with all the blasts your army is going to be throwing out you will get a lot of mileage out of the skulls and for a very cheap cost.  The other good thing is you can spend wargear on the inquisitor that you would have spent on prescience.  Now when placing skulls, especially when you only have three, its really important to place them well.  This will vary on the army you are facing but in most cases, set up two in central locations on the board, with your third near your main lines.  Most armies are going to be coming at you to try and dig you out so you want multiple layers of skulls to continuously hit their advance.  If you have more this makes things a lot easier as you can have two rows of three to have a massive coverage of the board for your blasts.

Where he can also be great is in killing squadrons of vehicles, esp weak ones and take advantage of the large blast, barrage, and ordnance.  With twin linked you reduce your scatter and if you score three hits, you are almost guaranteed three pens against weak vehicles, throw tank hunters into the mix and you can wreck a lot vehicles in one shot.  Don't use him against heavy vehicles like land raiders, unless that all you have left to shoot at it, with only ap 3 you need  a natural six to destroy it and a six to pen, counting on a lot of luck is not how you win battles.  Save melta guns for those, take the auto kills for the MoO when you can.

Against infantry, he is great when he works and better now since prescience is now available.   He can be good against large or spread out squads, where you have more room to play with in scatter.  This is another reason to take two, the chances of you hitting and causing the damage you want goes up when you have a back up, if the first scatters 18 inches, you have the second one to make up for the first ones miss.  Now also pay attention to the units around it and not just the one you are targeting.  If you target a unit that has multiple units around it, preferably all around it if you are lucky, you have given yourself a guaranteed hit.  It may not be the unit you target, but with S9 AP3, most of the time things are dieing.

With some other orders their are some other tactics to consider.  If you are receiving pressure and want to get your command squad out of dodge, the Forwards for the Emperor order is a great little trick up your sleeve.  Your command squad and MoO gets to fire, then run.  This is also a great way to move your command squad into better positions for the next turn.  Its not as reliable as the normal movement, but a great way to still be able to fire and move if you have MoO in your squad, unless you have relentless, then it doesn't matter.  Unfortunately precision shots cannot be made with blast weapons, but its barrage already so its almost as good.  IMO the orders you are going to be using the most are the split fire and ignores cover/tank hunters tied for second depending what you are facing.  Against eldar and SM bikers ignores cover will be great, against vehicles without jink tank hunters all the way.  If you need to go to ground, get back in the fight is still their to get back up and still fire.

With all the new goodies out there, the MoO is probably one of the cheapest and most destructive units you can field.  Yes you will need support units to up his efficiency, but your bringing prescience psykers any way and servo skulls help out a lot more than just him.  The greater access to units that can multiply his effectiveness is far greater than before and you will get even more damage out of your MoO than ever before.  Orders grant you amazing flexibility and support units will keep him on target.  Remember to target units in LoS first and use other barrage weapons on targets out of LoS.

Also another thing to note is that he is still effective in a chimera, with being barrage, he does not need to take up one of your precious two fire points for the chimera and fire.  He is barrage and can fire out of LoS (huddling in the Chimera).  You'll lose some effectiveness but most likely the other weapons firing out of the top will more than make up for it.

So while there are new revolutionary new tactics with this guy, he is a third cheaper than before and far more support units and orders are out there to make him go from meh to teh ahwsom!

If you were already using him, he is better than ever.  If not, consider him strongly as most will be taking a CCS and he has a cheap ass basilisk in his pocket.  Thats it for my first tactics re look at IG, more will be coming, though some will only be minor changes, while others will have a lot of new tricks.

Posted by Grumpy Guardsman at 10:54 AM