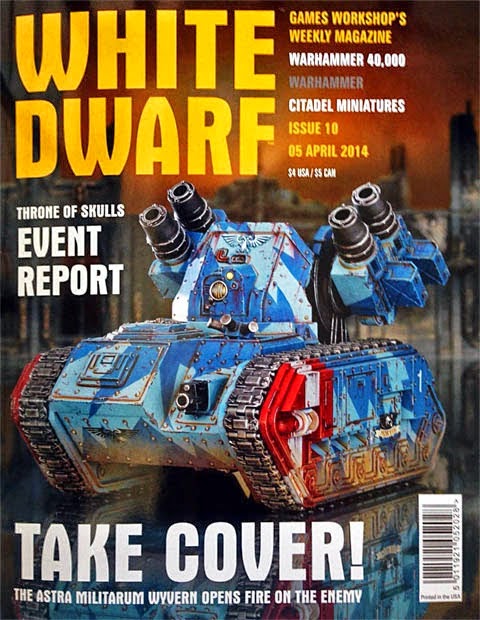 Alright, it has been a busy week, but I have been reading on the latest and keeping up with things.  So more confirmations of earlier rumors on orders came out and new models were leaked.  Probably the most controversial besides the Taurox is this bad boy, the Wyvern.  Its part of a dual kit, the other being the hydra.  Now I don't think this looks that bad at all, but neither is it winning any model contests.  So its the kit no one expected or asked for, but it is what we got.
And I like it.  So run down it has the standard chimera chassis profile.  Its opened topped and is armed with its storm shard mortars.  Note it has two of them.  They have 2 blast shots that are twin linked, ignore cover, barrage, shred and are S4 Ap6.  At first this does not seem that great.  Here is the thing, I love mortars, I have won so many games through the use of the little things plinking away and pinning infantry.  So for 5 pts more than the current mortar squad, I get one more blast, rerolls to hit and wound, ignore cover, and if I need to I can move and fire two shots.  Plus immune to most small arms fire, if not resistant to it.

So where do I see these working, well its pretty obvious.  They are here to rain the pain on infantry.  Two will be throwing out 8 blasts for just over a buck twenty, three will throw out 12 and still be under 200pts.  Its like they saw the Space Marines thunderfire and were all, oh thats cute, you think you have artillery, let me show you how its done.

Having ignores cover is actually very useful even with barrage.  This works especially well against non marine bike units.  With all the jink saves with bonuses that many bike units can get, the Wyvern is a great unit for piling on hits and wounds to these units.  It also works well on scout equivalent units that want to be in cover and take advantage of stealth or shrouding to give them bonus.  Also with night fighting this is a great way to get around that save and bonuses and give infantry an early bloody nose.  With a searchlight you can light that unit up as long as you have LoS.  Not a bad way to support your other units, spread small blasts every where to get hits and light up the board, but you take the risk of not having cover from return fire if your other units don't take the threats out.

All in all I like this unit, the kit is ok and looks to be easy to modify and magnetize so you can have access to hydras or wyverns depending on your fancy.  The look is ok, nothing amazing but I am really liking the potential for damage it can do to infantry.  I use mortars to great affect and will definitely be picking up a few of these.  They are not going to be the end all be all of the artillery but another tool in the shed to use.