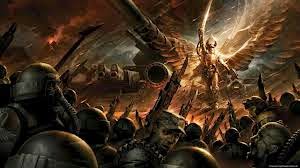 This meant to be a bit of an update post, with info on our podcast and the blog as well as some observations from myself and others about the new Imperial Guard.  Mostly on orders and also on a few of the HQ choices, priests and officers of the fleet.

So first off, episode 3 of Segmentum Command was recorded last night, big kev was not able to join do to work but he'll be back for the next one.  We are going for a 2 week schedule, releasing episodes every other saturday.  There should be no issues with this other than delays caused by life but we'll be trying to stick to that as much as possible.  The Episode was naturally focused on the new Imperial Guard, but its not a straight codex review.  I go through my gripes, Torquer has his tally talking about complainers, and do a run down of the changes in the book as well as finish up on tactics and allies talk.  Our wives were both present for it as well to give their thoughts and make fun of us.  As long as editing doesn't take too long, the episode should be out this saturday.

Now there are a few things I want to put out there regarding IG.  First lets talk about Priests and Officers of the fleet.  They both have abilities that need to be activated by a Ld test.  They have a Ld of 7.  Seems to suck.  However per BRB any model/unit is required to take all leadership tests on the highest Ld in the unit.  Only exception is for psychic tests.  So as long as a higher leadership value guy is in the same unit, both of those tests can be taken on theirs and not their own.  This was noted already on the 40k deamons blog here.  Just wanted to spread the word.

Also orders, the thing that makes IG awesome.  If you read the orders section, no mention is made to LoS being required for any of them.  The orders mostly just confer a special rule to that unit.  In case of bring it down, that unit gets tank and monster hunter.  There is no restriction on the unit or commander having to have LoS, just that if the order is passed that unit has that rule.  Now I have read the order mechanics section, and I did not see anything requiring a officer having to have LoS to the ordered unit.  In either case, you do not have to expose your officers anymore to enemy fire in order to get orders off.  Park them in or out of a chimera out of LoS and issue away.

Just a few things I wanted to note for all the IG players out there to take note of and help your game out.

Posted by Grumpy Guardsman at 2:08 PM