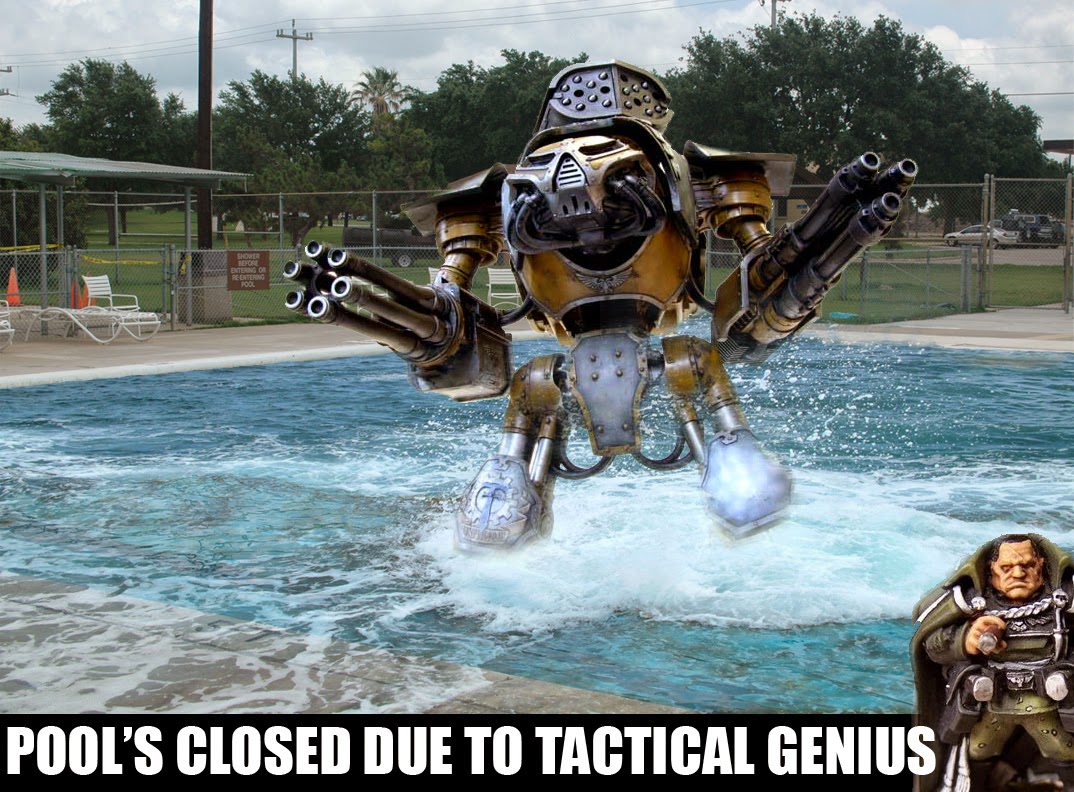 Time for an old favorite, Mr tactical genius himself, Creed.  Now he has seem so decent changes in the new book, but is still doing the job he did before.  I wouldn't say he is outright better than before, just different.  He does have the potential to be really good and is still one of your better HQ choices to take.

So his profile is the same, a standard company commander profile with Ld10.  He now has two hotshot laspistols rather than a twin linked one, which is better in my opinion, though the hot shot pistol is limited significantly in range.  He ahs carapace armor, frag grenades and refractor field.  He did drop to 80 pts which is nice though with the CCS gaining 10 its going to cost you pretty much the same as before to take him.  He is an upgrade character, so you purchase a CCS and then Creed to replace your company commander.

The special rules is where Creed has really changed.  He has voice of command.  Next is supreme commander, which allows him to issue 3 orders including those allowed by senior officer, as well as requiring him to re-roll any failed orders.  Note he does not actually have the senior officer rule so technically you can have a lord commissar be your warlord with creed, though there is no situation where you should.  The reason being is Tactical genius.  If creed is your warlord, he gets two warlord traits.  You can roll both on the Astra Militarum traits, both on one of the main rule book tables, or split it up and roll one on two different ones.  Note you re-roll any duplicates until you get two different ones.  So if you are taking Creed, he is your warlord, end of story.

While your traits are no longer as reliable as before you have a really good flexibility with them and can choose which table you want to roll on depending on what you are facing and which has the better potential to help you.  Most time though you should be rolling on the IG table as it is really good.

So you have the potential for quite a lot with this.  You can get D3 units to outflank, relentless, units not taking morale tests within 12", preferred enemy, 18" order range, extra order, getting two of these.  None suck.  You could get 4 orders with a boosted range, to get him close to what he had before.  You cannot plan around the result but all are useful and the two you do get will ensure your army is fighting better.  Also rerolling all failed orders is awesome, so you don't need a vox with the squad and gives a higher chance of orders going off with certain units like special weapon squads, HWS, conscripts, pretty much any unit that cannot take a vox.  The short of it is that Creeds orders are going off just about every time.

Now Kell, as he goes along with Creed.  IMO he is not as good as before and is best left behind.  The main reason is that if he is with creed the ordered unit no longer uses creed or the CCS leadership but that of Kell which is a standard 8, pretty blah.  He has the bodyguard rule so he can automatically take the wound if you choose.  As well as he must declare a glorious intervention whenever possible and automatically passes it.   The problem is that if a CCS is in close combat, most times it is dead and Kell is only a meh fighter and up against another character or IC he is probably going to bite the dust.  And you are paying 75 pts for this meh.  Sure he has a standard and a powerfist and sword, but a commissar with weapon and regimental standard are cheaper and better in my opinion.  If he still allowed orders to be on Creed's leadership, then it would be different but as it stands he no longer really has the order buffing power and with Creed already having rerolls stock, its not much help.

Kell is best left behind, but what should you be taking with Creed in his CCS.  In my opinion Creed exemplifies the Battle Staff CCS concept and you should be going full bore here.  So regimental standard, probably a medipack now, MoO, OoF and an astropath(not a must take though).  A medic is a better choice now simply for being much cheaper and you really want every advantage you can get to keep this squad alive.  A chimera is a great option here to up the survivability of the squad as well as give it some firepower and mobility.  A heavy weapon is a great choice as well for your last two veterans though plasma guns are another great option too.  This squads main objective though is to support your army and not get into the fight.

An important question to ask is whether you should not roll on the IG warlord table.  The answer is it depends. The command and strategic tables have some really good ones and with two rolls you mitigate being stuck to situational ones, plus with having a choice on which table, you can choose based on your army composition, your opponents, and the terrain.  The IG one is more reliable and will always have something useful, but that is not to say the others aren't as well.  Strategic has two that affect reserves and outflankers, so if your army(note not detachment) has a significant portion of these, then this is a good choice to roll on.  Since you get two rolls, Strategic is actually pretty good and should be considered depending on the situation.  I would recommend trying both out and seeing which works best for you based on your tactics you use, though I would always roll twice on one table, it minimizes getting a useless one and strategic only has a few that really are situational.

In my time playing with Creed, I found him to work best in infantry heavy armies and he should always be in a good central location to issue orders and buff with the regimental standard.  Now you no longer need LoS for orders so if you are not taking a chimera then you should find some good terrain to hide behind initially and keep the squad alive.  If your opponent has a decent amount of barrage then find some good ruins to hide under and provide decent LoS blocking.

He no longer works as well with armies that are all over the board because of his reduced order range, he can possibly have it increased but don't plan on that happening, when it does you can adjust accordingly but other wise keep it in mind to be close enough to your troops to issue those orders.

A great second choice is another cheap CCS to give creeds squad some flexibility in placement so you don't have to worry about him covering everyone.  This CCS can be either another Battle Staff to double up on OoF or can be weapon focused, or both as nothing stops you from having weapons and an advisor.  Keep in mind you already spent a lot of points on Creeds CCS so try not to go too overboard on the second.  Personally I like going more with weapons in the second CCS to give some added firepower and supplement Creeds army buffing abilities.

Yarrick is another good choice, though you are getting spendy on your HQs, he is great in that he can occupy a more forward position in a unit and give out orders and is great in a fight.  This is one of the few occasions where yarrick does not need to be warlord.  This army doesn't need priests as badly as others but they are still a good support unit and a few of them will do well still.

A tank commander is not a bad second choice as well, giving you some armor support with a BS4 tank and orders, but you can get away with not having it either.  Unless you are going vehicle heavy, a second CCS or Yarrick is going to give you more bang for buck.

Otherwise Creeds tactics are pretty simple, keep him centrally located and protected.  Have your PCS and the other CCS(if you bring it) issue orders first and save Creeds for the important targets and orders.  Generally speaking Creed doesn't require a whole lot of finesse, he finds a good spot and issues his orders to make your units better. The only finesse will be in your warlord traits, deciding which table to roll on and how to adjust with the different ones.  Because of all the possible combinations you can get, there really is no straight and easy answer on how to play it.  Your going to have to play it and see how it affects your army with the different results.  I will say that the IG traits are the safe bet most of the time and you should be rolling there, with strategic being a good second choice.

That's really it for Creed.  He is still an awesome support general that just makes your army better.  He should always be considered if you are taking a Battle Staff command squad and if you are taking infantry, he is the guy to take.