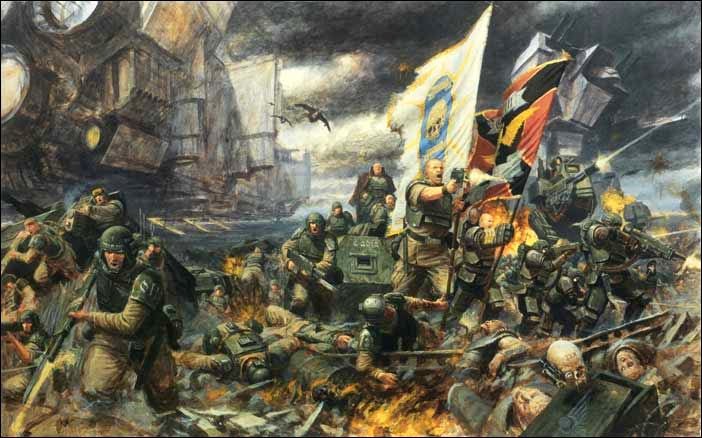 So I have been out of the loop, sorry but I have been travelling.  I am currently visiting family and attending a wedding and thus my absence.  I'll be mostly taken up due to that for the next week so have no worries, I have not disappeared and I will still post when I get a chance.  I have another history post in the works that I am trying to get out in a couple of days if time allows.  So I just wanted to take this time to give an update on things, mainly the podcast.


Torquer and I tried to get a recording in before I left, but ended up not being able to, so the next episode is going to be delayed till the both of us are able to get in town.  We are shooting to make the podcast an every other Saturday affair, having two weeks between each one so we have enough time to record and edit, and also stay on top of things.  In a way this works out as by the time we record most of the Imperial Guard will have been released and I will have actual thoughts on it instead of hopeful speculation.  So episode 3 is going to be hot and heavy with Imperial Guard.

Other than that, I am really happy with how things are going and can't wait to see the full book.  Orders are looking amazing, not all have been released but basically have Pinning, Split fire, Precision shots, can shoot and then run, the old move order, first rank which now work on hotshots.  This is awesome.  The precision one I really like, you have someone up front tanking shots, nope not anymore its all the guys behind him.  This will take some finesse to get to work right but I really can see this being helpful in getting around those units that rely on one model to tank wounds.  Split fire, always good, pinning, I love pinning so fuck yeah!  Shoot and then run, suck it battle focus (okay its not as good as battle focus).  But there are supposed to be more as well so I am quite happy with these orders, hopefully bring it down is still in here, I'm not too worried that it has been dropped and if so, oh well I'll bring more Inquisitors.

The new artillery kit, the wyvern, was unexpected but I like it.  Its cheap, less than a griffon with shred, ignores cover, barrage, two shot blast with 48" S4 AP6.  Honestly i like this, you see I love regular mortars, and this is about the cost of a normal mortar squad but having ignores cover and shred is nice, with one less shot.  I personally like it, you may not, but my god you have so many artillery choices you don't have too.

Oh I just can't wait, just a little bit closer.  I'm about to have a lot less money in a few weeks.