Alright, lots of interesting releases have come out, most notably Imperial Knights.  I have talked a little bit about them already so really no need to go into much detail there.  I will do some Tactica on them, as I get games under my belt with them and theory becomes confirmed, though some theories will have to wait till I get more knights.  Chaos had its recent release and another on its way, the helbrute formations.  Also we finally see the void shield generator.

I'll start with the void shield as there is the usual controversy over GW decisions.  The short of it is that it is to be a limited release of 1000 and priced at $100, and will be made in resin.  Now to many this sound baffling.  Why such a limited release?  This actually makes a lot of sense if you think about the changes in IP protection they are required to make now.  In Escalation there is no pic of the generator, for good reason since that does not count as IP anymore, and would only give knock off makers ideas for their own copying.  So they are releasing this 'collectors' item.  Pic here: 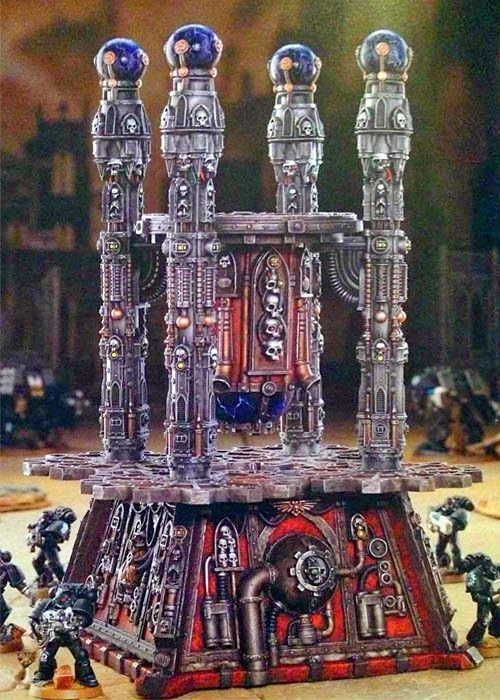 The first thing this does is give them IP protection.  The second is that it allows them to get the model out on the market fast.  Resin is easier to go through the molding and casting process and cost effective for small batch runs.  So can they can cost effectively get a model out on short timetable that also protects their IP while expanding their line and game.  This then leaves then some room to go into full production later in plastic.  The tooling costs and time it takes to get up in running for mass production is much longer and higher to start up.  So they can then release the 'same' model later for half the cost (note that most of their 'collecters' items tend to be in this range of cost over standard product) which makes people have access to the model and is not over expensive.  This would end up putting the eventual plastic model in the $50 range, similar to bastion in both size and price.  This is what I see happening.  It would be great to have a plastic model now, but with their focus on redoing armies, I can understand a terrain piece not being the top of their list to get out in mass production.  Plus you now have an example for kit bashing and I have some ideas already using valkyrie engines. 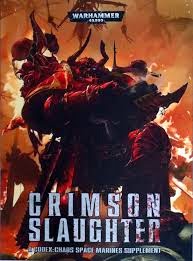 Crimson Slaughter was released over the weekend, and despite initial complaints, it is looking to be actually pretty good.  Adds a decent boost to CSM with some free, if situational rules, to the whole army similar to SM.  Fear is army wide, granted there are more than a few things that ignore it, but eldar and Tau don't, IG don't, DE don't.  Orks do and don't, get them under the fearless mob number and fear then starts to matter.  Point is its not as useless as some like to claim, its free and its better at least than the 'free' I'll challenge you to kill me rule that Chaos champions have.  Plus it makes possessed playable (note not the same as competitive).  Their stats are decent and the new table is very useful, with none being bad really.  Also being troops allows them more freedom, plus since most CSM take cultists anyways to take other more expensive units, its not like that's really an issue.  Added to a solid warlord table and relic section, I personally think this is going to turn into the book CSM needed, if not the one everyone was looking for.

The hellbrute's are looking interesting.  Currently I don't think they are bad, they just occupy that area in that they are not really points efficient for what they do, and have trouble getting where they need to be.  There are three formations being released in ONE dataslate, so at least GW is not trying to nickel and dime for each one, that's something at least.  One is basically a formation of a hellbrute leading cultists around, with some mention of the brute not caring about hurting is retarded little followers,  interesting.  The most interesting one is the hellpack, which is rumored to be 3-5 brutes, with one being a leader and they being a squad(ron), the leader has a 5+ invul and lets be honest will prob have the I want to die chaos rule.  At least on a hellbrute it can challenge most infantry leaders and win, minus a few.   There is also a possibility of deep striking, which is very interesting if true.  Now that may be part of the third formation, which there really is little info on.  It wouldn't surprise me though if it was some sort of daemon forged formation, allowing you to take hellbrutes and maulerfiends/forgefiends in a group.   Don't quote me on that, thats just my personal theory, really no evidence on what exactly the third one will be.

I have always wanted to do a khorne themed army (not straight khorne bezerkers though) and this could be the one to do it at least decently well.  Plus if the rules for the brute dataslate turn out as rumored or close, they may become more common to see, especially the pack one if it can deepstrike.
3 hellbrute with multi meltas and heavy flamers would be a nasty little unit deep striking in the rear, and tough enough to require major attention to deal with.

In other news, I just can't fucking wait for IG!  I find myself constantly on the lookout for any new rumors, going back to rumor sites for any new word on what is coming out.  I'm a little obsessed right now.  Everything I have seen and heard so far looks pretty good.  The models (for the most part) look very good and is a hopeful sign that the units are getting a needed update.

I would also not be  surprised if the hydra was s dual kit, though what the other would be is up for debate.  I could see salamander or griffon being the other part of the kit.  Would fit in the back area where the quad gun is and GW is doing a lot of dual kits these days.  But it could be a single kit as well.  There is supposed to be an artillery kit, which would most likely be basilisk and a couple of the other artillery kits.

The Taurox is granted not looking too pretty at the moment, but its also one of those models that may not look to bad once in hand, and does look easy to modify, so really not too much of an issue there.  The big thing is what will its stat line be.  I think it will be similar to a leman russ for armor, with a large transport capacity or will ignore Ogryns bulky rule, and maybe an assault vehicle though this last one is more wish listing than likely.

I do not see an new valkyrie kit.  The current one is fine and the vendetta upgrade on FW is easy enough to get.  Plus lascannons are easy to find and kit bash if you don't want the FW one.  I don't see a new one coming out, given the other kits that are coming and the amount of infantry that the IG have, its more likely to see new infantry kits than a valkyrie.

Now what do I see in the codex?  I see a balance of power shifting.  Veteran squads are going to get nerfed a little most likely, they have been an awesome to more than solid unit since the codex dropped.  So most likely they will go down to two special weapons instead of three, and doctrines will change slightly.  I don't see a massive change, but its clear GW wants to sell storm troopers, so I expect them to cheaper and have more options available to them.  The special operations rule is actually pretty good, so its unlikely that will change too much, more than likely will be a points drop with a lot more options added for weapons and gear.

They also want to sell ogyrns, so I expect a similar points drop to storm troopers.  With two different ogryn choices, what will most likely happen is one will be really good and the other pretty blah.  Will be interesting to see, my money is on regular ogryn actually, as I see them dropping in points, but then the riot shield ones being to many points and not good enough to warrant the increase over the normal meat heads.  To be clear, Ogryns are not bad from a stat and rule perspective, they are great in CC and can hold down a lot of squads in combat and others they can straight rofl stomp through.  They have a weakness to fire and any unit with 2+ save and power weapons, though thankfully being T5 makes them harder to double out in most cases.  If they drop around 15pts, then they would be about right, putting them in tyranid warrior price range, which is really about right if you compare the two.  Warriors have one less T but are also better at shooting and have a better save and ld, plus options to be much nastier in CC, so they are a similar and comparable unit and I see this being about right.  40pts per model is insane currently, terminator they do not equal.

Infantry, well they really haven't changed a whole lot in a long while.  The last edition change really just brought the armored fist and conscripts under one unit selection, other than that no big changes to rules.  So expect minor points tweaks here and there, and as much as I would love to see conscripts go back to their old rules, they will most likely stay the same.

Orders though are an interesting topic.  Two things could really happen.  One is that the core orders remain exactly the same.  Sgts maybe get access to one order or two for his squad, but I'm not holding out on that actually happening.  Then to supplement you get special orders that you can either buy, or lets be honest, roll randomly for (hey I hear you like randomness, here's some more) or get from special characters.  This is what I see most likely to happen, the core orders will remain unchanged, but with a sort of additional top layer added (call them regimental orders).  The second thing is a complete restructuring of the order system and actual orders.  This would be really interesting and could involve orders based on regiment type, chosen by your commander, that trickle on down.  While this would be cool, I really don't see it.  I see them doing more of an add on to orders than a complete redo of them.

Other special wargear will be nice and I am expecting some standard that gives special bonus eg banner of destruction ala IG.  There is lot of cool things that GW can do with standards and are something I hope is a big focus on in the book, as they really are an integral part of the IG fluff.

Other than that I can't think of anything else, I really can't wait!  The codex can not come out fast enough.  What else do you think is going to change or be added to the IG codex/army?


Posted by Grumpy Guardsman at 9:38 AM