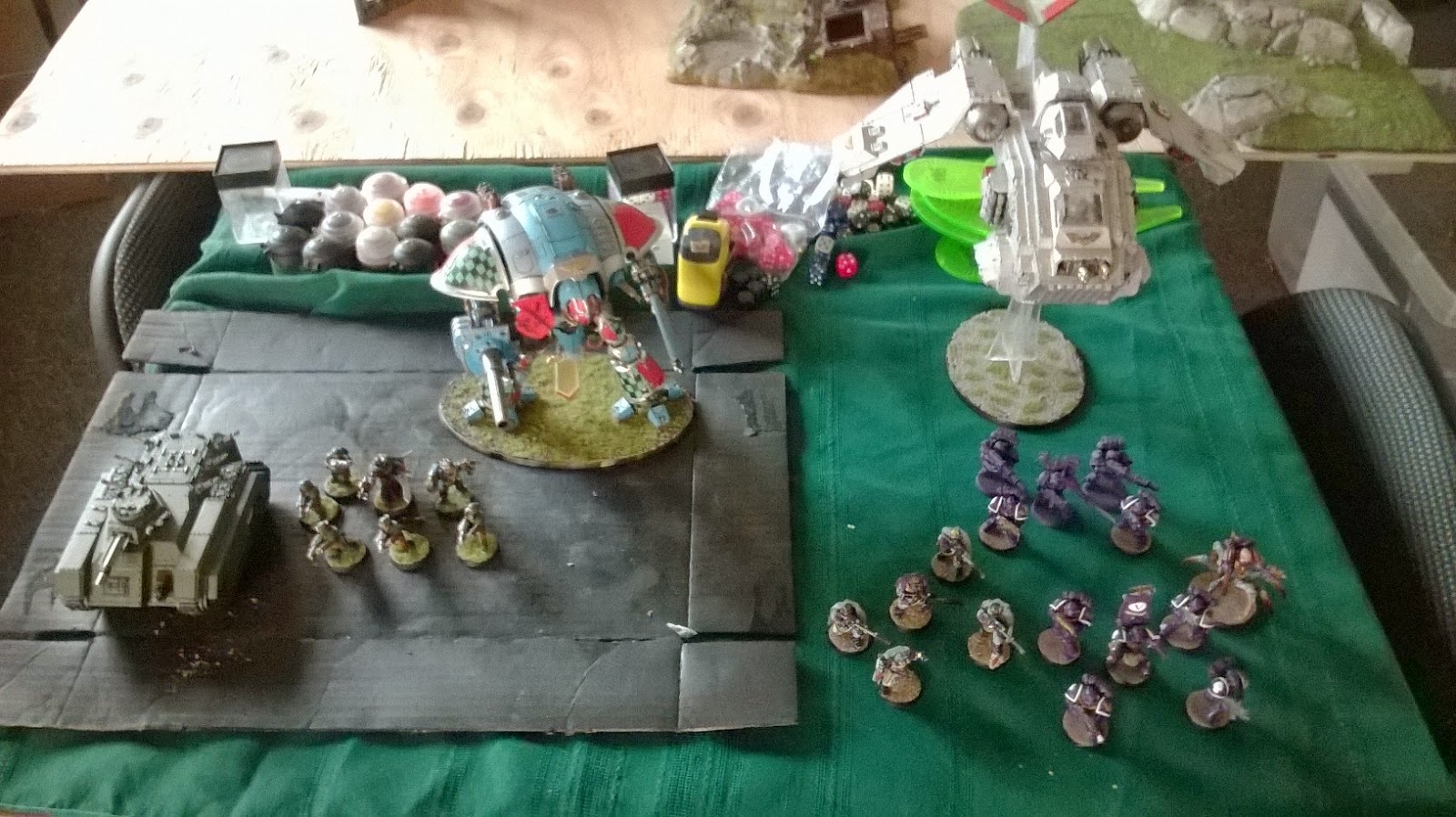 Alright, so finally got a game in with the knight to test it out.  We did 500pts just to check it out and see what the smallest army you could take this guy in.  Both lists are legal.  My brother was kind enough to be my punching bag, thanks for being a good sport and humoring me.  Both our list are extreme, basically we are going to either win or lose totally.  Played annihilation with standard deployment.  The board was 4x4, at 500pts its hard to play on a large board.


I took a Knight paladin and Inquisition was my primary with a standard inquisitor, no upgrades and 5 henchmen with boltguns and a servitor with a plasma gun.  So not a whole lot.  This really is the only legal way to take this guy at this point level.  Note I do not recommend you do this unless its for just for fun play or to test it out, make sure your opponent knows your bringing this bastard and let him build a list to take it out, as he really needs to.  My inquisitor got the +1 S and rending to his boltpistol as well a 6+ invul for his warlord. 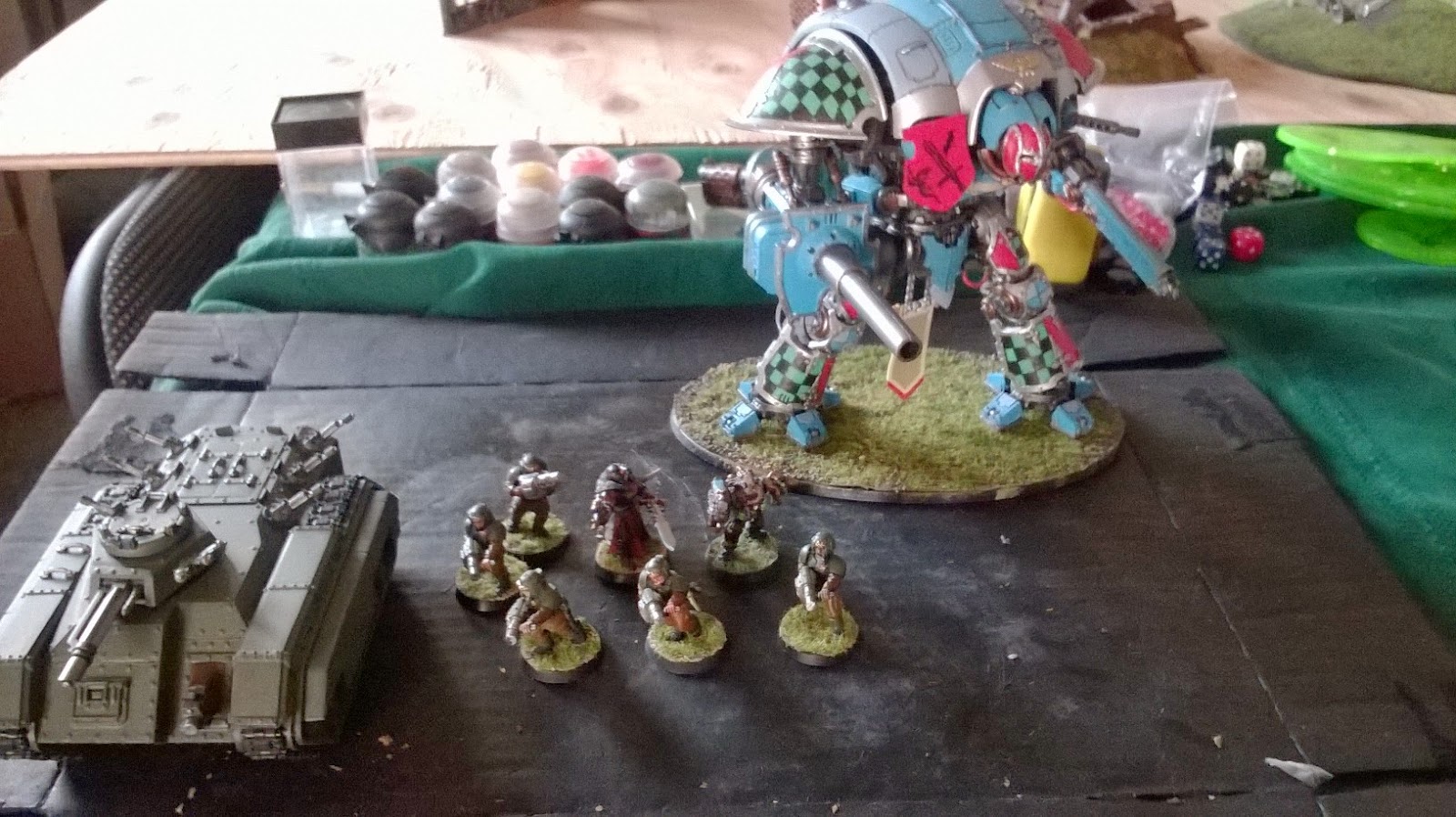 He took his marines with a librarian, no upgrades.  5 Standard scouts, 5 tacs, a devi squad with 2 lascannons and a stormraven gunship with multi melta and lascannons.  Basically we both have extreme lists.  Either he is going to bring the knight down and then kill my pitiful troops and fly around with his storm raven unmolested, or I'm going to wipe his troops up before the storm rave can make a difference.  The librarian got dominate and the trait that lets units use his leadership within 18'. 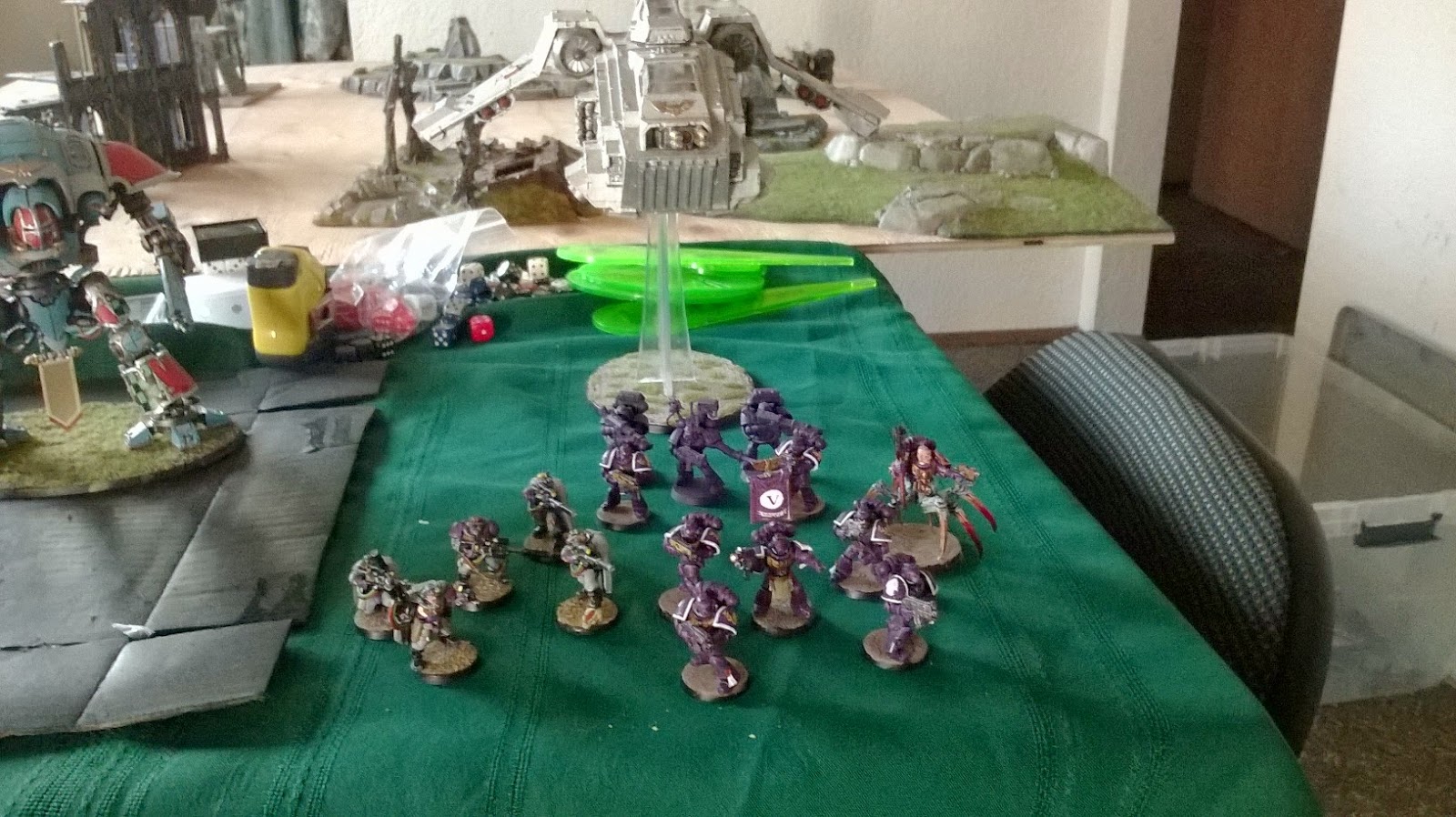 He won the roll off and deployed first and I failed to seize.  He deployed his Devastators in the corner on the hill, we rule it as area terrain.  The tac squad with librarian deployed in the opposite corner in terrain, his scouts infiltrated into cover on the same side as the tacs.  I placed my knight in the open in the center and my chimera with inquisitor in the ruin. 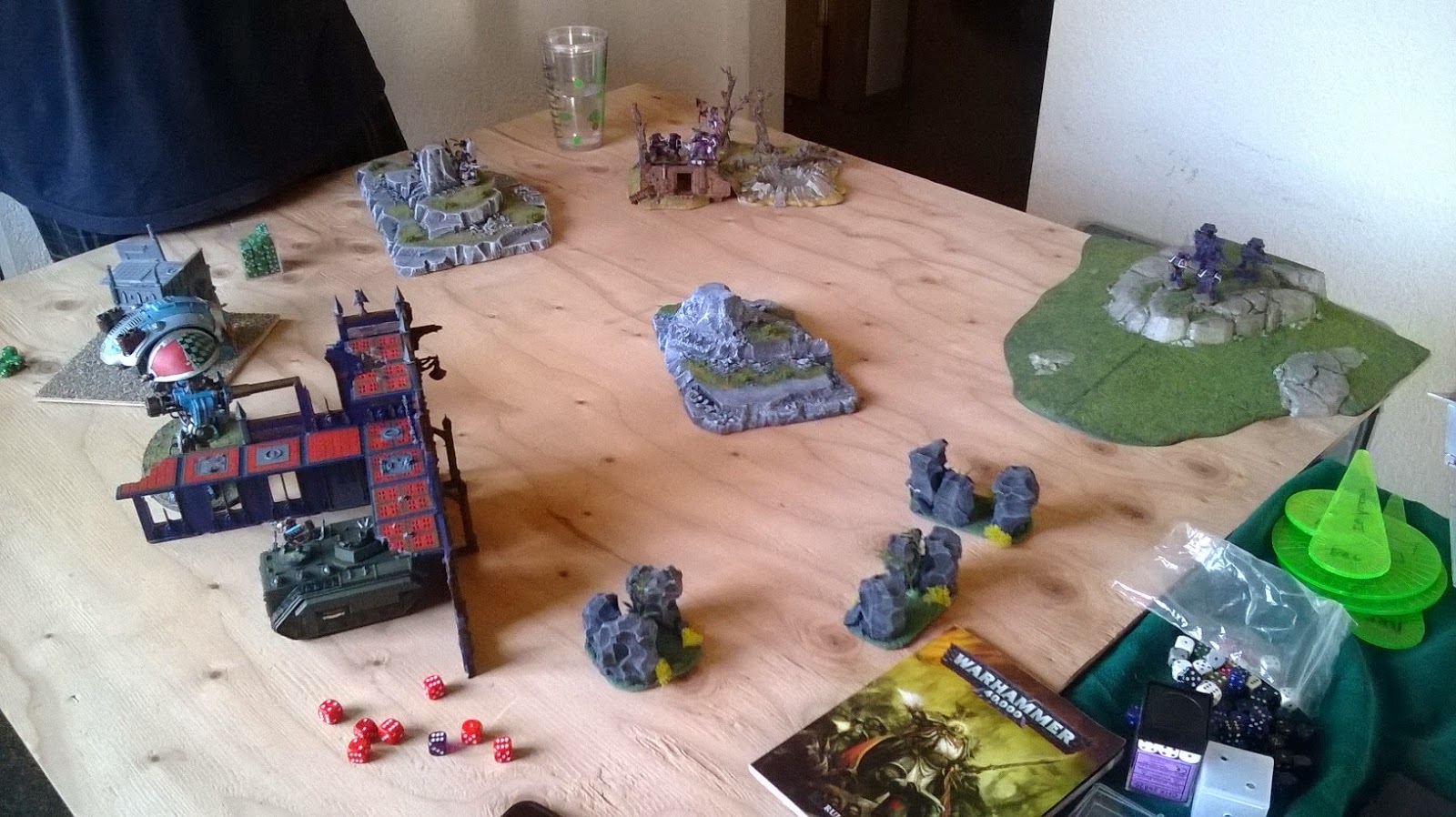 His scouts moved up slightly and he shot his lascannons at my Chimera, getting a pen and glance, but I made my cover saves.  This would be a theme for the game, I rolled 4+ like it was hot.  My turn I moved the knight up between the two hills.  Chimera stayed still and I fired the P cannon at the devastators, killing 3, the chimera was able to knock one more down with its combined shots.  I fired the Knights battle cannon, killing two Tac marines.  Its powerful but with scatter it can seriously minimize its damage, as well as proper spacing.  Brother did well there so I only got a couple marines with two battle cannon shots.  Fire the stubbers at the scouts, but I rolled badly to wound and he made his saves.  I charged the knight into scouts, killing 3 with the main weapon, then killing a 4th with stomp, I only got one blast.  The scouts broke but I was not able to run the last guy down. 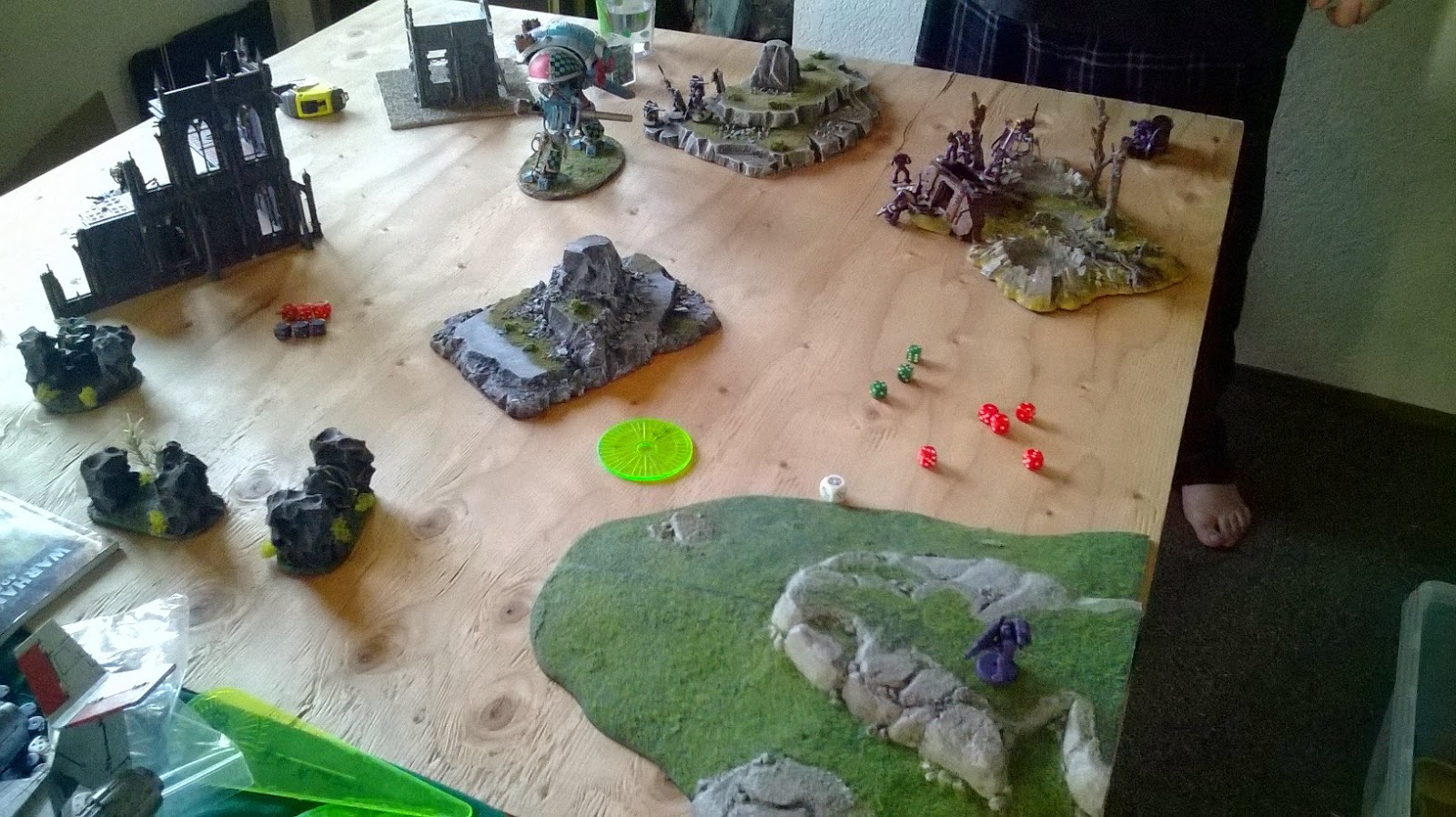 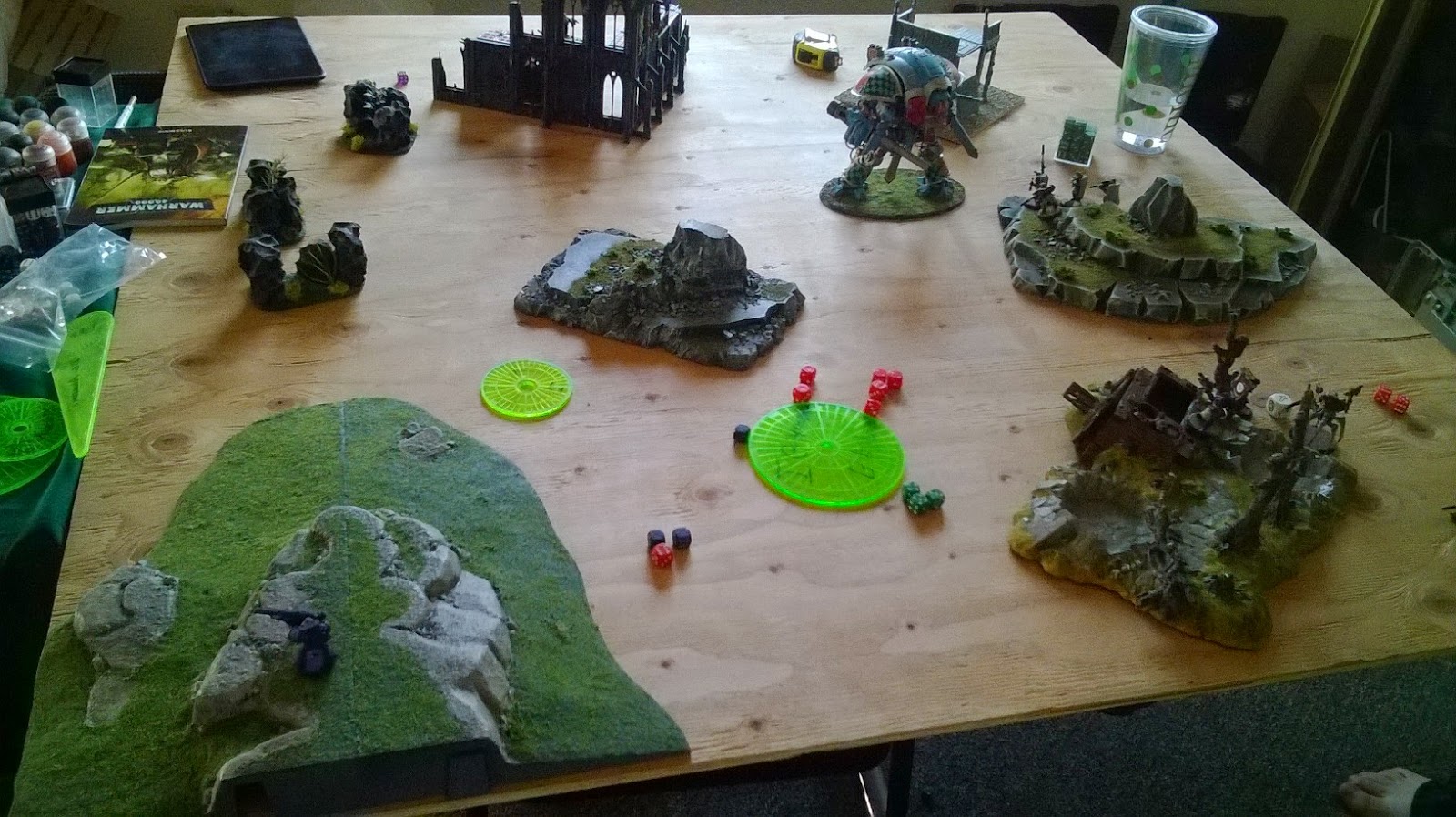 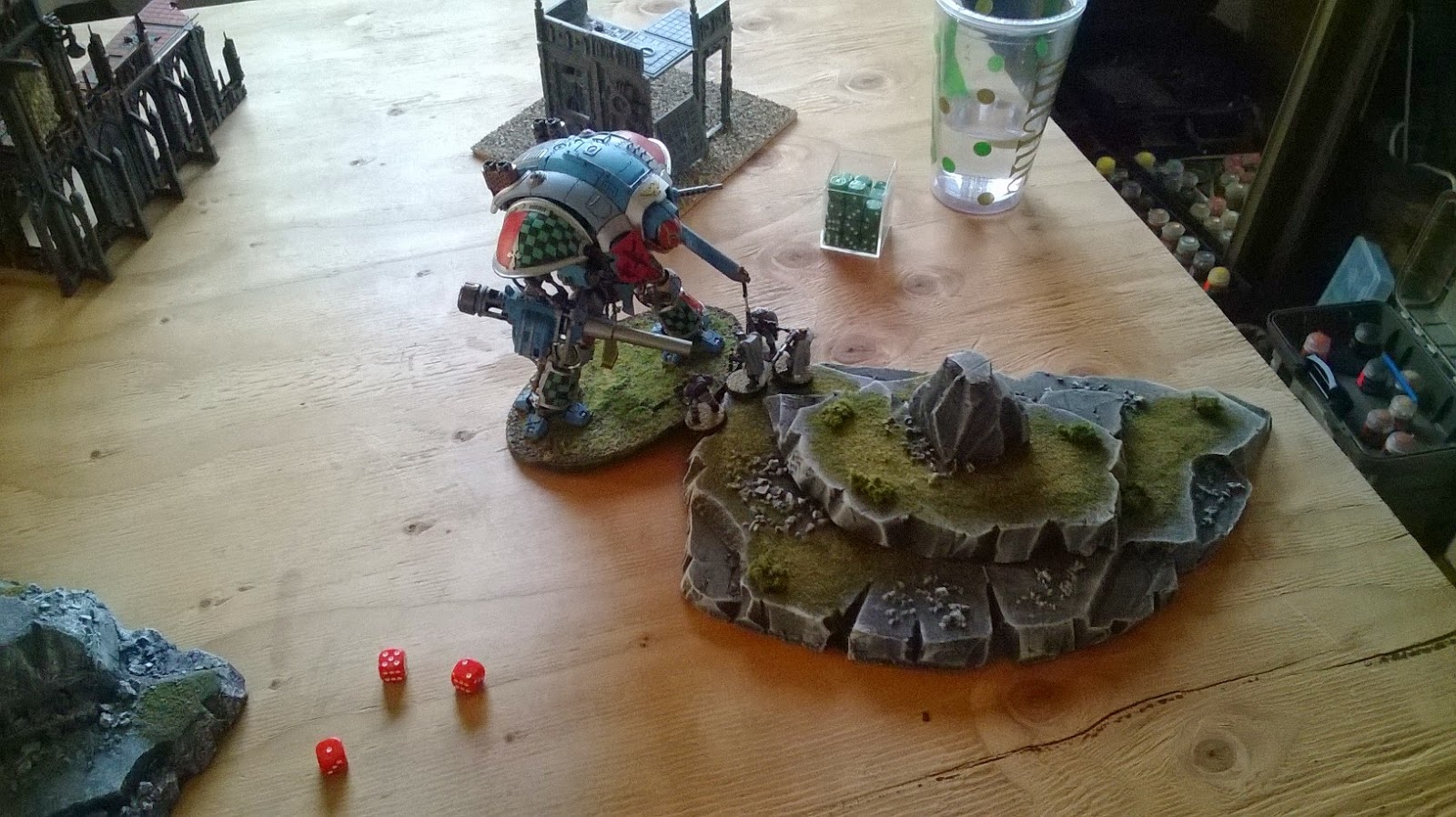 To be clear, for normal attacks with the D weapon, each hit rolls on the D table, its not a one roll.  The way its worded its for each hit, so I rolled a one which is why they did not just all die.  So take this as advice, a cheap unit with a power fist or melta bombs or equivalent can hold a knight up, as long as you can throw some good ld with either stubborn or fearless to hold it in check.  It can do damage, but the D really doesn't do anything different against standard troops than normal power weapons besides ignoring the invul save they don't have.  So don't throw high points cost units like termies against them, a scout squad with melta bombs supported by a fearless character will hold a knight up easily, even with stomp its not going to wipe them out fast enough.

His turn 2 the raven came on.  He moved his scout up to get side armor shot.  Fired everything at the knight.  I made all my invul saves with the shield.  When you are making your saves this thing is unstoppable, so hit it from multiple angles to get around the shield.  I continued moving up, firing the battle cannon at the tacs as well as stubbers, killing the remaining tacs minus the librarian.  Plasma cannon hit again and killed the last devastator.  Chimeras MLs killed the scout.  I got a successful charge off with the knight and killed the librarian. 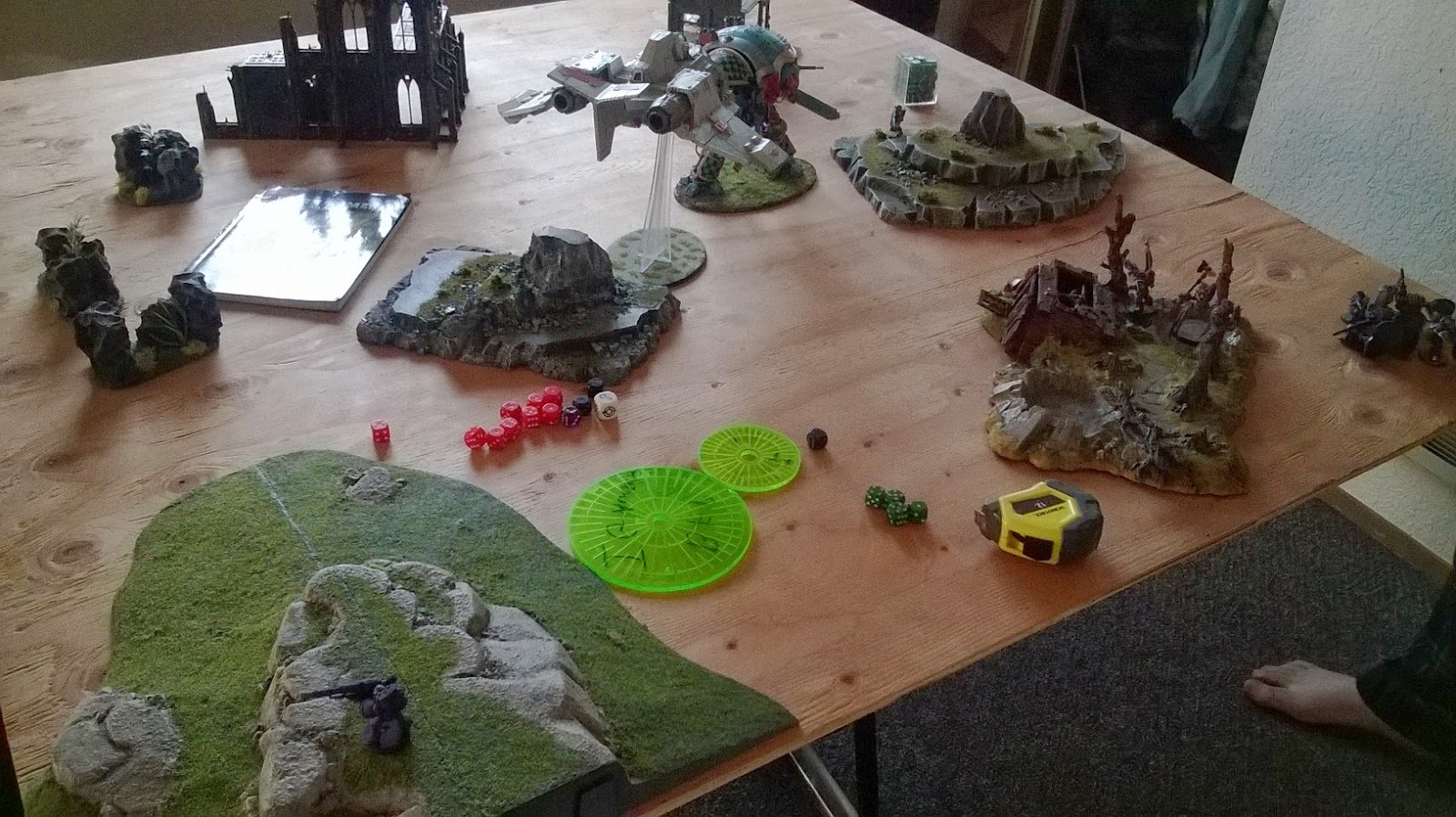 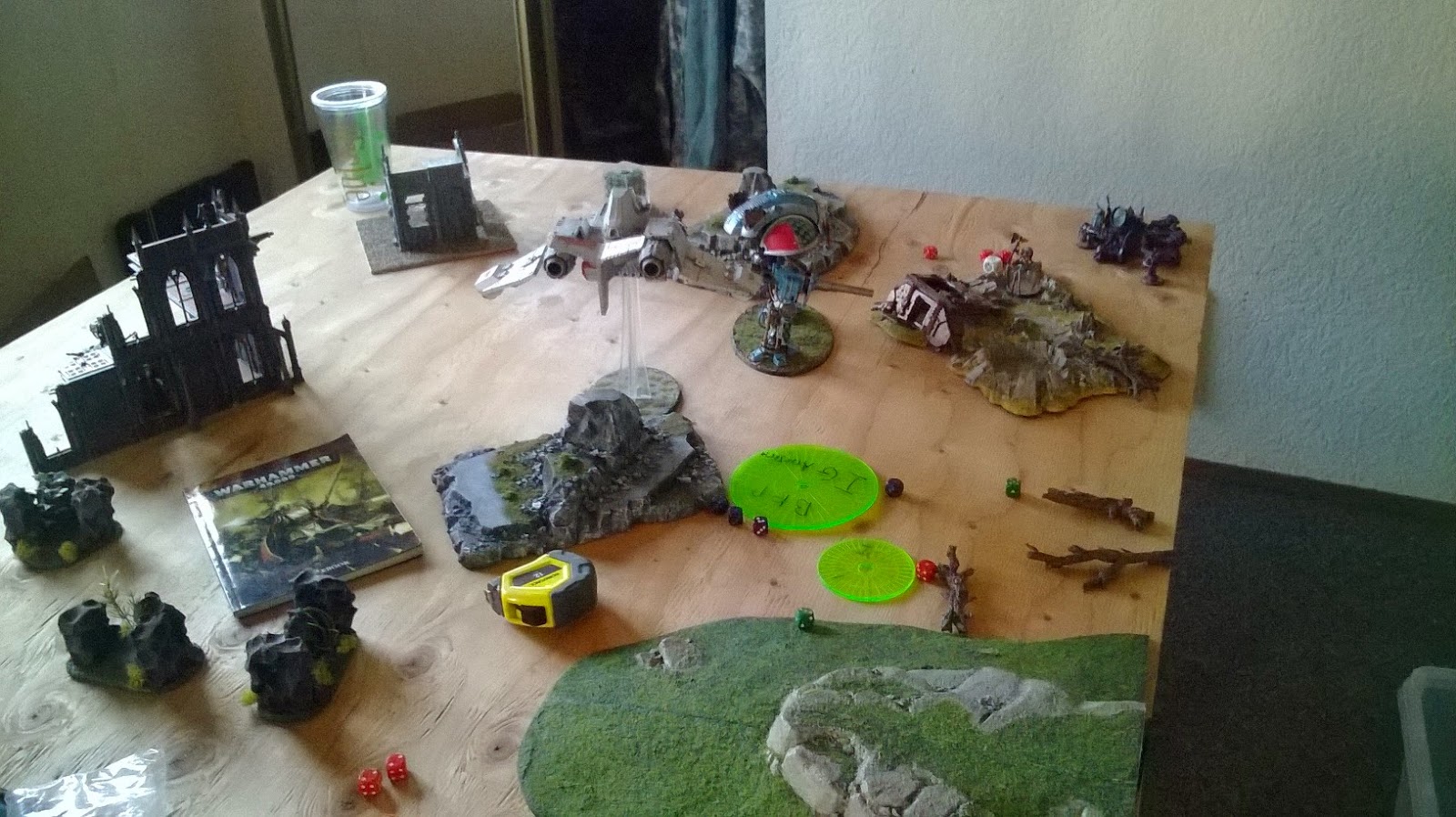 So my brother wanted to call it, and it was pretty much over, but I twisted his arm to keep playing and see if the raven could bring it through, as I still had nothing to touch it.  He was a good sport and agreed to continue. The raven went into hover and moved behind the chimera and blew it to hell and killed half of the squad inside in the explosion, though they managed to not be pinned.  In my turn I turned the knight around, but being in cover he did not move fast.  Fired the battle cannons, one hit but he made his cover save.  My henchmen assaulted and attempted to krak grenade it but again no dice. 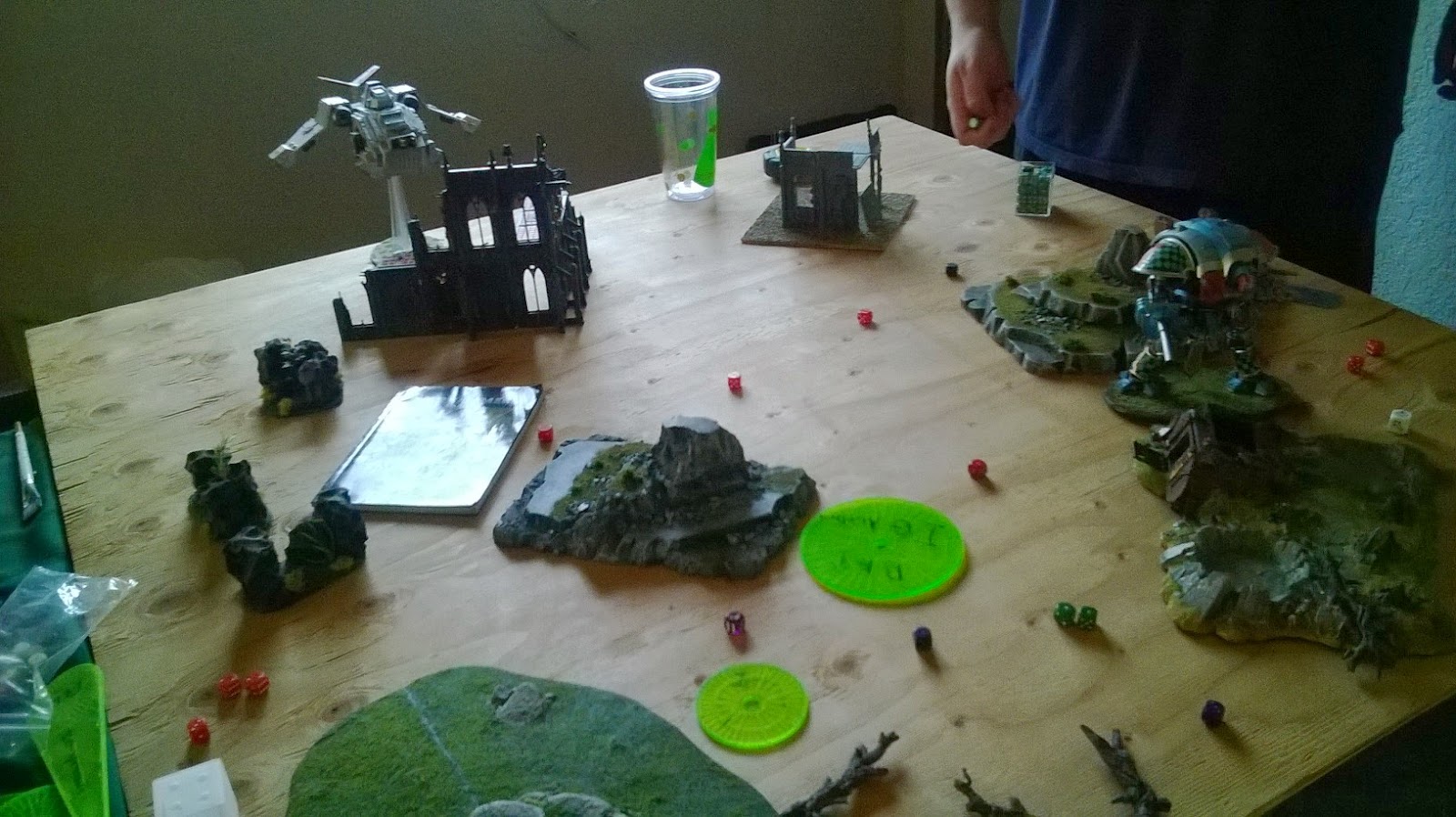 Next turn he flew up and tried one last time to do damage but combined with misses and shield nothing got through.  We called it at this point as there were only a few turns left and he would have ot go into hover to remain on target, where the knight would just charge and explode it. 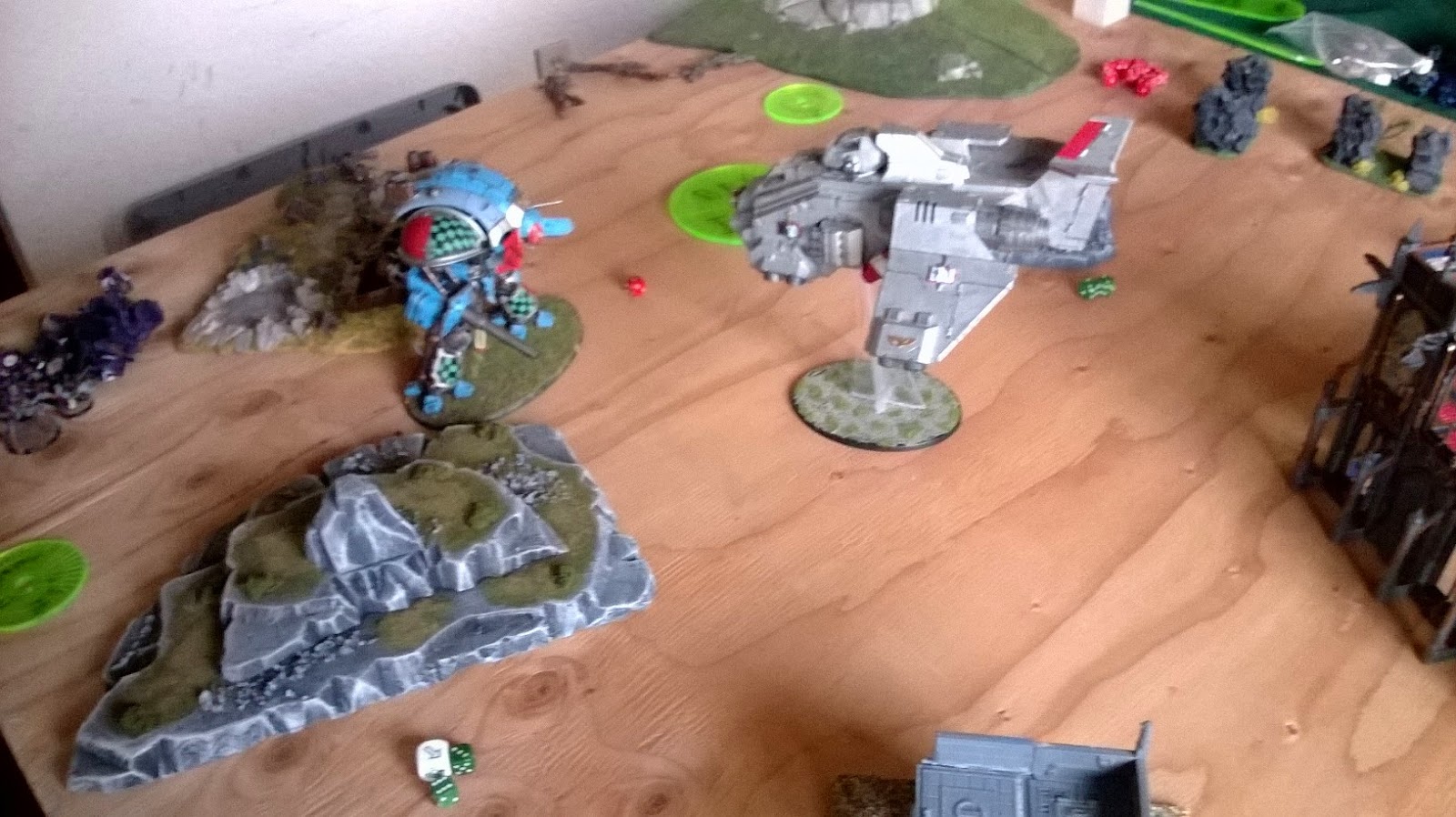 So it was a not too surprising victory.  I expected one of us to lose catastrophically, either he would get the shots in early and bring the knight down and then my tiny troops would be slaughtered, or the knight would rampage through everything unchecked which is what ended up happening.  A big part of this, I was making 4+ all game, made every deny the witch roll, these were huge.  Had he got dominate off on the knight, I would have had to roll for leadership to do anything and even at Ld10 there is still chance at failing.  Had the one scout held in combat for another turn that also would have shifted things, he could have focused fire on chimera and troops right and gotten rid of them.  Had he gotten any hits through cover and the shield that also that would have changed things.

So whats the verdict?  There isn't one, that's one game played at a low point level with really bad lists.  Lets be clear, this was an exercise in theory and to see if it could be done.  My list is super easy to neutralize for any objective mission, the inquisitor and his six guys are too squishy and will die to any serious firepower, leaving only a knight with the hopes of wiping the board.  Note a Knight cannot contest an objective, so he can only take an objective away by wiping a unit.

Now at 500pts there really is no way to change my list, Inquisition is really the only way to run it with the available points, I could drop the Chimera for a rhino and take a few more guys, which is probably the better option as that is about 4 more henchmen or a few more servitors I could take, but still does not solve the problem of having an army that has to hide while the knight kills stuff.  If you are playing against one, kill the squishy stuff and play to objectives, if you don't have units that can tie up the knight in combat, play keep away and use terrain, it significantly slows down the knight.

at 500pts I can think of a pretty solid IG list that will take this on and can reliably do well.  Basically a minimal command squad with MoO with a platoon with melta bombs and commissar and vets in chimera.  Thats a full melta vet squad and 30 guys to tie the kinght and kill it, you can drop doctrines though I would recommend taking the demo as it will be very useful against the knight.  But if you drop doctrines and MoO and a few points here or there you can take a lascannon squad as well, don't consolidate too many things as you want the knight to have too many targets to shoot or assault than it can reliably deal with.  This option would have a smaller platoon, but you will have more reliable shooting and you can give the platoon commander melta bombs, have him charge with the platoon and they will reliably kill the knight, the the mobile veterans capable of dealing with whatever is left and take objectives.

For his list, I am thinking double drop pod tac squads with meltas and combi meltas, plus the librarian with a few upgrades.  Basically plan is go second, have the knight waste a turn shuffling around, then drop in and get as many angles as possible.  Spread out to avoid the D and multi charge and do as much damage with the meltas.  You can possibly kill it in turn one, I did a lot of rolling and it can happen, most likely though even with krak grenades you'll take half its hull points down.  Do spacing right and the return fire of the knight will be minimal and it will be force to charge and try and take everything down.  Its not a guaranteed win, but its a better rounded list than the other and can deal with infantry just as well with bolters and assault.  I'm going to see if my brother is willing to test it out, though I may let him play with the knight and I'll take the marines, let him pound on me.

Only one game so really can't derive accurate info on how the knight is, other than when its rolling good it is a hard mother to kill.  At 500 its a monster, but its all in so if it goes you have nothing left to carry you through.  I see knights being useful, but you have to play them aggressively, they are big and scary and your opponent will make mistakes against them.  At more point you'll have plenty to deal with one and they are a huge points sink and when they go, it will have a large affect on that army.

So do not fret, this bat rep does not really prove anything other than the knight can be powerful against a limited list, my brother gambled on the storm raven rolled snake eyes.

***Note we played a few more games the next day, I'll post them up later***

GG
Posted by Grumpy Guardsman at 9:24 AM